Sexy Cars in the City

If you were to make a list of the ten most car-unfriendly towns in America, New York City – and in particular the borough of Manhattan – would probably top the charts. This is a berg famous for crater-sized pot holes, ticket happy Meter Maids and sneaker-clad, room temperature IQ, mouth-breathing, car stereo snatchers (in Da Bronx, BMW stands for break my window). So when I heard that BMW was going to display a quarter of its Art Car collection in Grand Central Terminal, I pinched myself and then checked the calendar to see if it was April Fool’s Day! A free car show in a city that chews up automobiles and spits them out; no way Jose. But wow, was I wrong! Using the Google and the Internets, I was able to confirm that several of BMA’s icons of art and speed were coming to town and staying for over a week. And while I still couldn’t figure out why this was happening, every good Bimmerhead knows the drill - get the cameras and go to town. 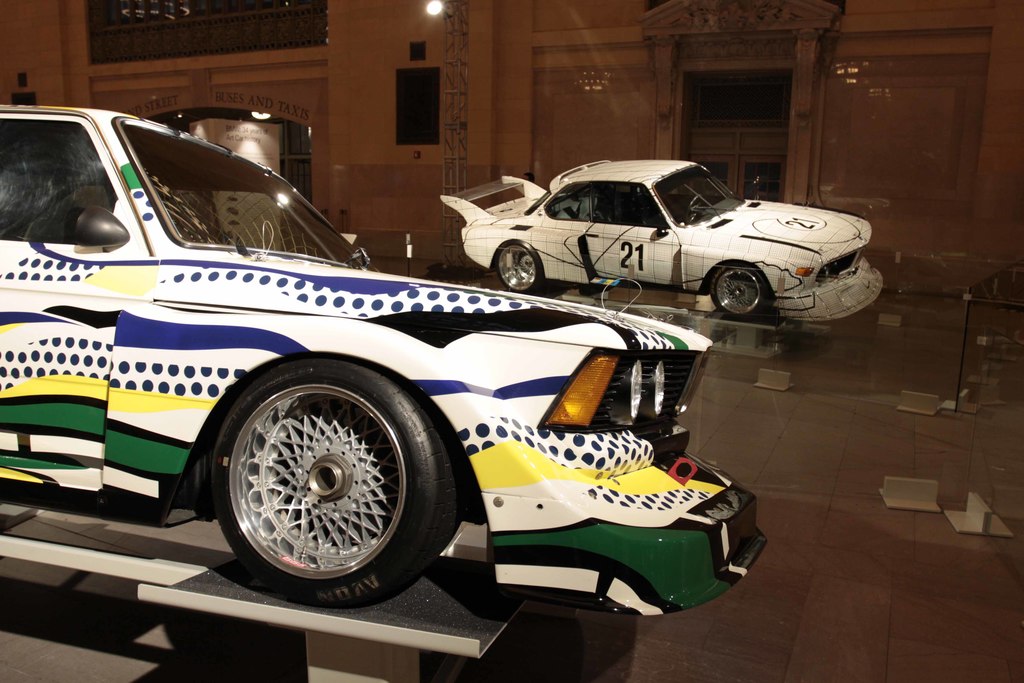 At the NYC preview, BMW NA’s VP of Marketing, Jack Pitney, said “BMW is proud to bring the works of some of the world’s most respected artists to New York City as part of a free public art installation,”

A very nice bit of corporate largess, but that was only the “what” of what was happening – what about the why? But, hey, this is New Yawk, so why not leave it to politicians to dip deeply into the booster-ism bandwagon to bring clarity to this automotive incongruous juxtaposition. Mayor Mike, I really deserve three terms, Bloomberg explained, “Arts and culture is our City’s signature industry, and it also nourishes many others. New York City’s vibrant cultural life is a big reason why so many people want to live here, and it draws visitors here from around the world.” If you can’t find your political BS thesaurus, let me translate: “Cars, schmars, show me the money!” But politics is not my game; I love cars so I had to visit the show to see for myself if this crazy idea worked. 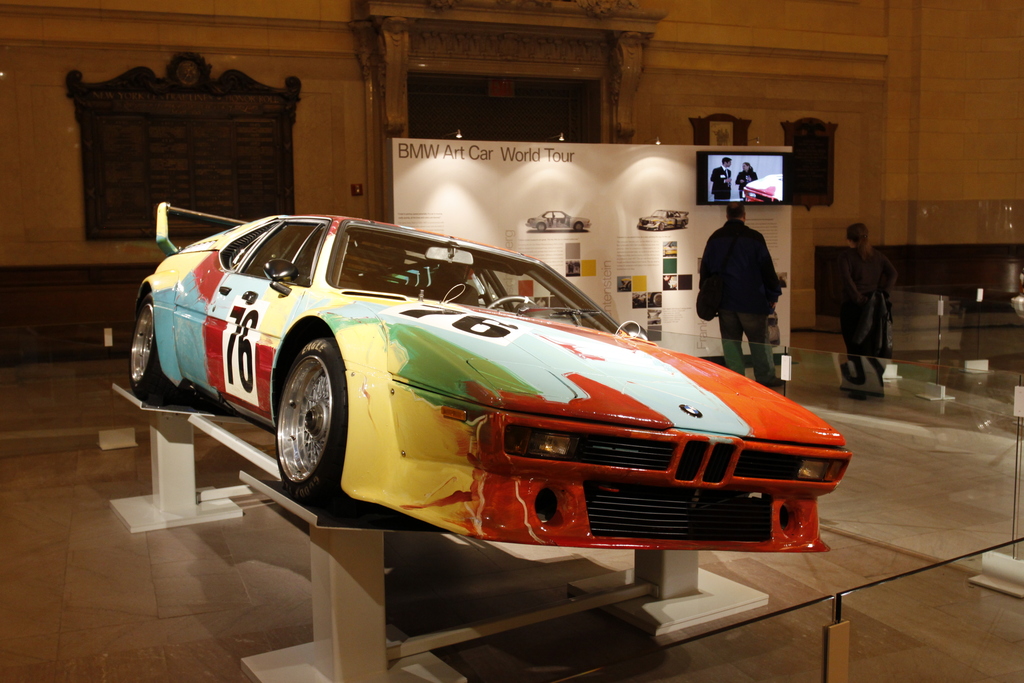 No need for suspense, gosh, darn – it works! First a little plug for Grand Central Terminal. This is a magnificent, fully restored Beaux-Arts structure that remains alive and vibrant, despite threats to raze it by the same kind of Philistines who tore down Pennsylvania Station. Seeing the BMWs in Vanderbilt Hall – a limestone and marble cavern so big I think it has its own Zip Code – stopped me and, while I was there, a few hundred other people dead in our tracks. 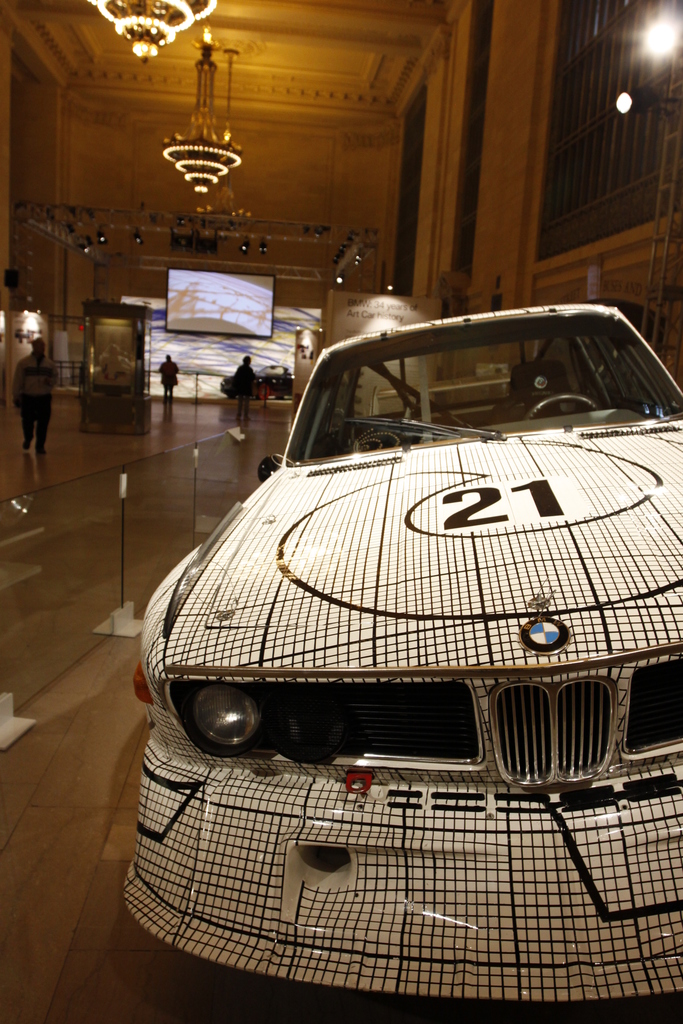 The display of these four cars, BMWs painted by Andy Warhol, Frank Stella, Roy Lichtenstein and Robert Rauschenberg, were artistically lit and arranged, with simple to read signs and the results were simply mesmerizing. So much so, I wound up spending almost two hours in the hall, reading the stories of how each car and artist were brought together, watching the continuously running video of how the work was done and listening to commentary on my cell phone for each car available via a toll free number provided by BMW (These guys think of everything).

In addition to the 4 automotive pop-art icons, there was a pro basketball court sized canvas striped with multi-colored tire tracks that were laid down by a contemporary artist named Robin Rhode. Rhode sketched out his intended design, just as artists have done for centuries, and then directed a driver who was driving a specially modified, paint-squirting Z4 as his brush. Above the “canvas” was a large screen video showing how this work was conceived and executed using the newly redesigned Z4. BMW even set up a web site at www.BMWusa.com/playz4 called “Expression of Joy” that will let anyone experience the fun of the new Z4 (virtually, of course). And for you I-phone / I-Touch owners, they have a free downloadable paint-by-car app that will test your own artistic genius. Very cool… 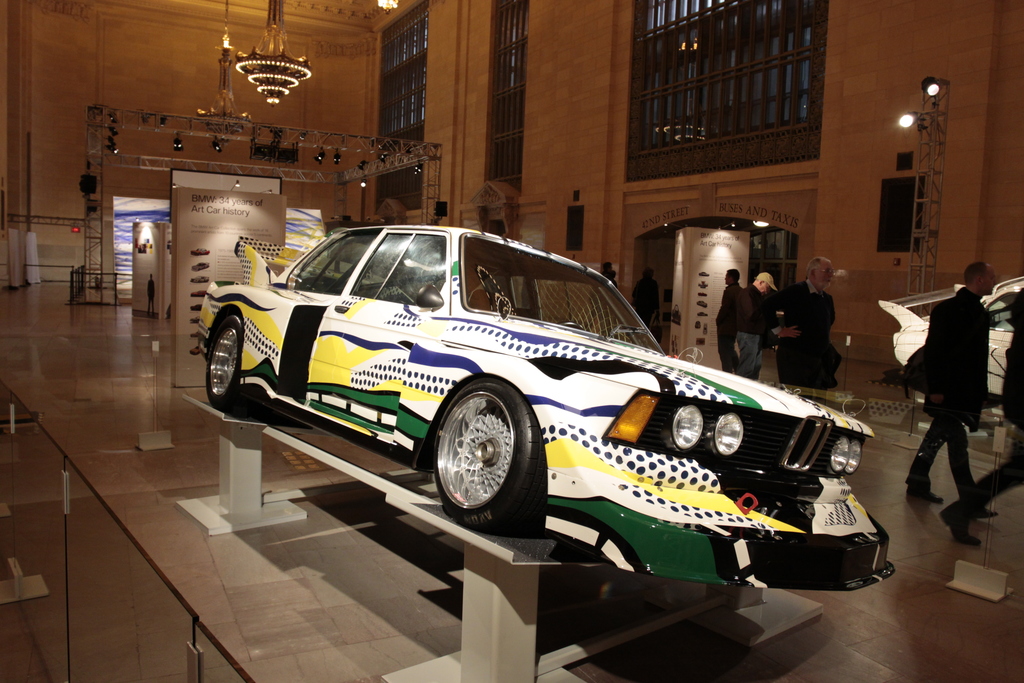 As fascinating as the cars were, the cross section of people stopping to look at the Art Cars was, to me, even more intriguing. In a town where cars can be a bona fide liability, people of all ages were drawn by the magnetic pull of these special cars. I wanted to ask the people what they thought of the display but this was, after all, Manhattan. I expected the response to my questions would be, “Hey, I got ya art cars right here, pal!” I decided to ease my way into the task by floating around the edges of the crowd, listening to conversations to take the pulse of the onlookers. I heard one person say (by the Warhol M1), “It looks like he got a bucket of paint and just threw it.” This twenty-something’s companion replied, “I got a paintball gun; maybe I could be the next Picasso?” as Rodney Dangerfield used to say, “No respect, no respect at all!”

I eventually got up enough nerve to speak to Ricardo Ventura, one of the army of well-spoken security guards providing 7X24 protection at the exhibit. I wanted to know, having been around these cars for 8 hours a day, did he have a favorite? “Oh yes,” he said. “The Stella; it’s a beauty.” He envisioned himself cruising the mean streets in a full race BMW 3.0 CSL coupé – Oh yeah, he’s hooked!

I spoke to a woman named Julie who was in town from Pittsburgh as she was giving the Lichtenstein 320i the once over. She said, “They’re different… They all have their own little personalities.” But she was quick to add, “I’d like to drive the little sports car over there.” She smiled and pointed at the paint splattered Z4 on the canvas across the hall. Julie’s friend, Elaine, also from Pittsburgh, laughed when she walked by the Warhol car saying, “It looks like he started to prime it but didn’t get very far…”

I saw one guy, he said his name was Werner, studying the cars so intently that I had him pegged as a die-hard BMW nut. I asked him what he thought of the display. “I love ‘em, a nice combination of technology and art.” was his reply. And then he admitted, “I’m a BMW driver myself. I have a 530D.” Yes, “D” as in Dr. Diesel’s wonderful creation which identified him as visitor from Germany. He was only too happy to tell me all about his BMW. “It’s a weapon!” he said.

My last victim was a woman named Nancy who admitted to being a real, genuine, NYC resident. I selected her for an interview because she wearing a way-cool hat with a ring of yellow flowers added for artistic effect. “These are beautiful art objects,” she offered. Then she added, “Art doesn’t have to be on a canvas and art doesn’t have to be in a museum.” Her authoritative pronouncements should have given me a hint at her profession. “I’m an art historian,” she said matter-of-factly. (From Yale, I learned later.) How often do you get to speak to an Ivy League art expert? So I decided to I ask her if she thought this is serious art. “Serious,” she laughed. “That’s another question!” She simply described them as a “wonderful fusion of art and cars,” and left it there. 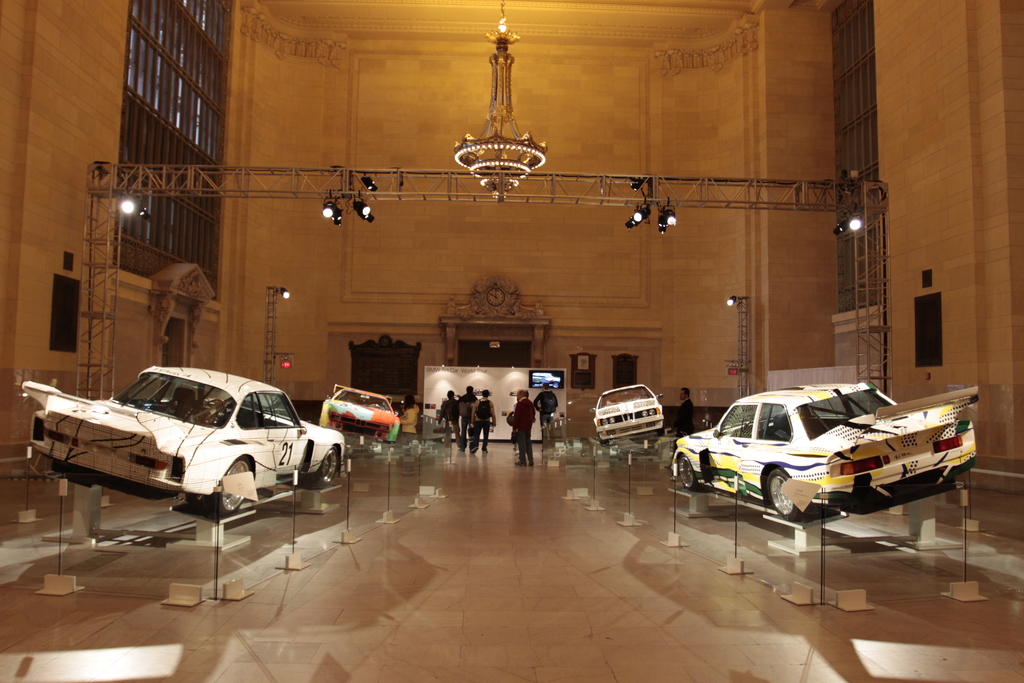 So there you have it. BMW, for any number of wonderful reasons, gave both native New Yorkers and hundreds of tourists a generous and thought provoking gift. And I for one applaud them for doing it. Thanks Guys!