Derek Bell is one of the most successful sports car drivers in history. His career spans three decades and is highlighted by 5 wins at one of the most difficult races in the sport of motorcar racing - Le Mans. To the casual fan, his name is probably most closely associated with Porsche or as a commentator with a distinctive voice for Speed, the cable TV car-crazy channel. However, for a while, back in the late '60's, Derek Bell was hand-picked by Enzo Ferrari himself to carry the Ferrari colors into battle on Grand Prix circuits all over the world. Your reporter recently caught up with Bell at track-side and he graciously agreed to a game of twenty questions for the friends of MYVRL. 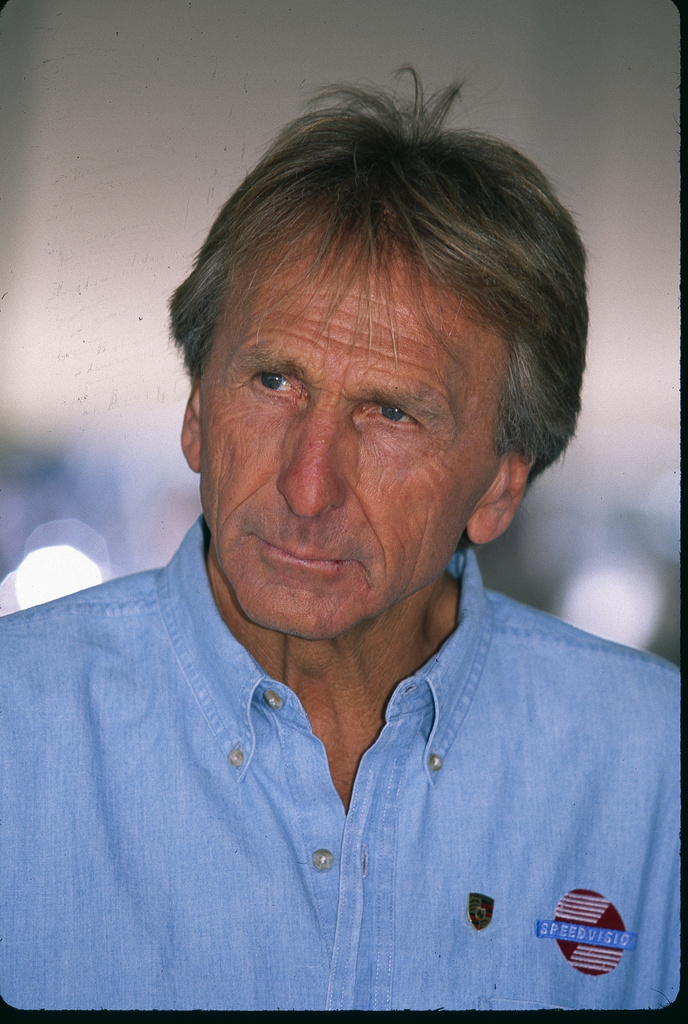 MYVRL: How did you get started with Ferrari?

DB: "I was running Formula two in my third year or maybe my fourth year and I was racing...at Hockenheim when Jimmy Clark, bless his heart, was killed. And suddenly [Enzo] Ferrari said, ‘Give him a test drive.’ At the same time I had a test drive with another Formula 1 team, the Cooper Formula 1 team, and I was the one that everyone was wanting to have, it seemed – rightly or not, I’m not sure!”

MYVRL: For a young driver, this must have been unbelievably exciting. Which team did you decide to go to?

DB: Eventually, I signed for Ferrari as a Formula 2 driver. And my first race was on pole at Monza in Formula 2. Following that I went to Zandvoort and I won my first race there...and so that was that. Then Ferrari picked me up and said, 'How about a Formula 1 test drive?' And I did...a race in England called the Gold Cup at Oulton Park, it was a non-championship race, but everyone was there. And then I went to do the Italian Grand Prix."

MYVRL: That must have been amazing, to be in Italy with the Ferrari colors...

DB: "Well that's it, I mean, you can hardly describe it. You have to be a great Ferrari fan or a Ferrari driver to appreciate it. And I know Michael Schumacher respected it [a few years ago] when he won there. Obviously, I didn't win. To win in a Ferrari must be out of this world. And I did sort of...have empathy for him when he actually won because I know what it's like just to drive for them at Monza in your first Grand Prix, let alone...win it. It's very, very special, you just can't imagine what it's like to be in a red Ferrari at Monza."

MYVRL: What was it like to deal with Enzo Ferrari? The reports of the way he treated some drivers makes him sound cruel and cold?

DB: "I had a great relationship with him, which is amazing really. My wife at that time was an English lady and she was very ill and I remember every day the Old Man used to say to me, 'How's you wife today?' - we used to speak French together. I said, I don't know, it's too early, I haven't had time to phone yet. He said, 'Come on, we'll phone her up.' We would go to his office and phone the hospital to see how she was. He was an

MYVRL: That doesn't sound like the same man who didn't send flowers to the funeral of a former driver?

DB: "Ferrari, the whole time with me was always very, very careful and they just wanted me to learn and gain experience. It was really strange because historically everybody in the Ferrari papers and magazines and anything I had read about Ferrari was always Ferrari pushed his drivers to the brink of death and all that sort of thing."

MYVRL: And you still drove for him!

DB: "Now I was very nervous about this because I just didn't want to die that early. I wanted to have a bit more of a career. And the Old Man never, ever pushed me. The whole thing was, just go out there, gain experience.

MYVRL" You were a young, aggressive guy, how did they manage to keep you reined in?

DB: "Well, (for example) I came to the United States Grand Prix and they said, 'Just go out and as long as you qualify, get on the back of the grid, it doesn't matter.' And they wouldn't let me go out and get a time. They never let me never do more that one lap at a time. Try new brake pads, try new disks, try this, try that. And (of course) I started at the back of the grid."

MYVRL: What happened in the race?

DB: "Once the flag dropped, I was allowed to go. And I got well up. I came carving through the field, from like twelfth up to seventh or something. (But) they never, ever pushed me."

MYVRL: Why do you think that was?

MYVRL: How much did the Old Man have to do with the day to day running of the team?

DB: "He had a lot to do with it, but I wouldn't know how much. I know he knew what was happening. (But) you never saw him around the race shop. You only ever saw him in his office. And I saw him at the test track when I had my first formula one test."

MYVRL: That must have been special...

DB: (Laughs) "Yeah it was. It was chucking down with rain and I went out in a Formula 1 car and I had never sat in a Formula 1 in my life before. And it didn't have wet tires it was on what we call a sort of dry setting or intermediate tires. And it was quite uncanny. I sort of got there and the engineer leans in the car and says, 'If you crash da car, the last time you'll ever drive a red car. Maybe a green car, (which is the British

colors) but never another red car.' No doubt, I had to go out and prove that I was worthy of a Formula 1 drive."

DB: No pressure. (laughs) And it was chucking with rain and I had sort of a dry tire, not quite dry, and I went out and I get to the first corner and there's the Old Man sitting in his 2+2, watching his new boy and I'm going, Oh My Lord! And there is this fine line between disaster and success in any test drive you have. The Old Man had never seen me drive before...So I went out and I obviously I was good enough. I didn't fall off the road. And it's a matter of being in that point between falling off and staying on and I guess I did it well enough to fool them and they put me in a Grand Prix!"

MYVRL: You have driven for two of the biggest names in racing.

MYVRL: Yes, Ferrari and Porsche - how are they the same? 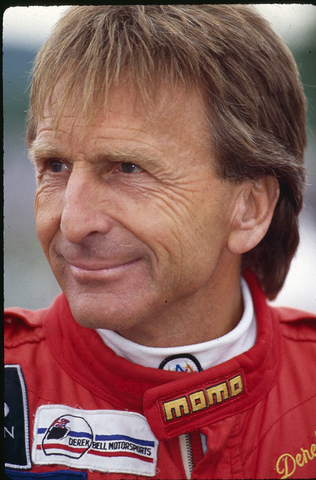 MYVRL: What's the best car you ever drove?

DB: In a way, I would have to say the Porsche 917, at the same time I love the 333SP Ferrari which I drove at Daytona…. The car is absolutely outstanding. It's like a Formula 1 car with more bodywork. For that reason, I love it. When I got out of it, from my first test in it...I was just grinning from ear to ear. And I said, that's why I started racing, was that sensation I had when I drove that car. It was the buzz you get from driving a race car now, a REAL racer.

MYVRL: Racing is such serious business, did you have time to kid around when you were at Ferrari?

DB: (Laughs) Well, I was talking to the team manager <after the Italian Grand Prix> about how we kept ourselves in shape for the races and he did say that you shouldn't make love one week before a race. I said that's all very well for you, but we race every weekend. The manager said, 'No I mean when I say making love I mean when you must crawl from the bed the next day. That's making love!' 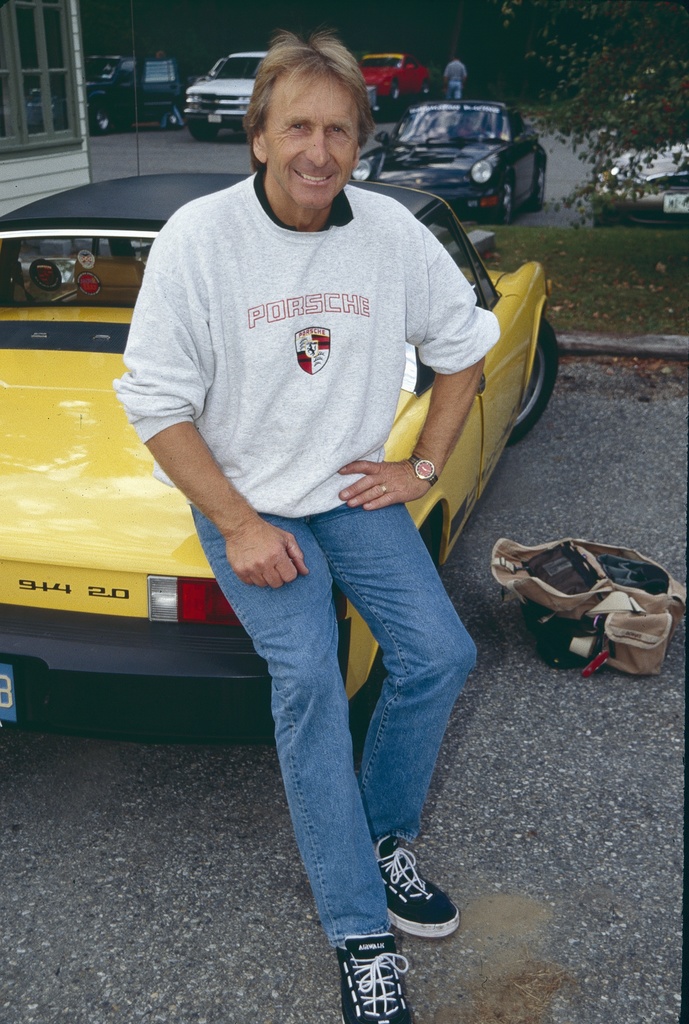 Comment by John Smith on August 22, 2010 at 5:51am
He`s really the eminent man, I`ll chose his biography as a topic for my research paper.