All Eleven GT RACER Episodes available in time before Christmas 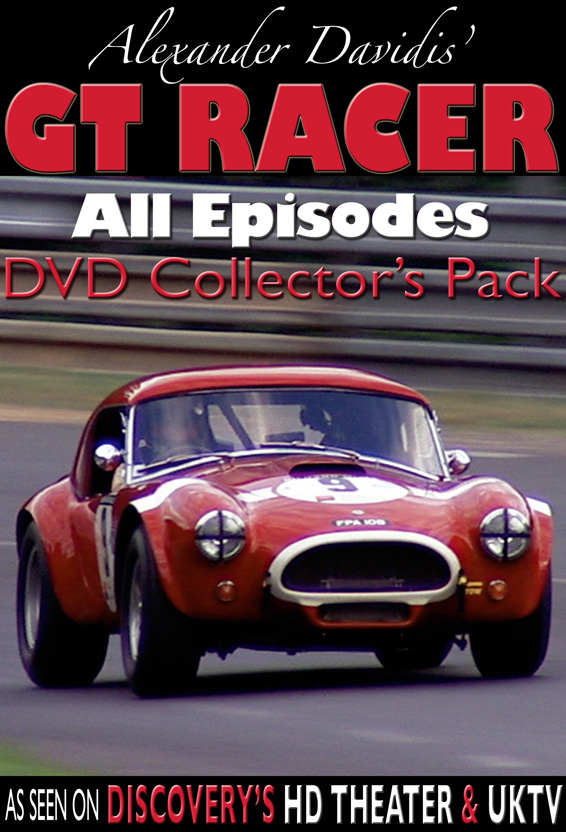 GT RACER is the spectacularly innovative cinéma verité style documentary series that
looks and feels like feature film, following international vintage racing. As Spirit Level
Films writes: “Director Alexander Davidis is fast becoming the go-to guy for
motorsports. Somehow he manages to capture the very essence of what it is to be in the
driving seat.” Now, for the very first time, all 11 GT-RACER episodes are available on
DVD from one source: Spirit Level Film.

GT RACER’s original pilot SHAKEN & STIRRED – Racing Classic Astons at Spa is
airing on Discovery’s HD Theater in the United States and worldwide on Discovery HD
channels. It is pure cinéma verité filmmaking, telling the story of two historic Aston
Martin race-teams that compete in the grueling 6-hour endurance race at Spa, Belgium.
During this race the featured million dollar racecar suffers a horrendous crash. However
the team feverishly and tirelessly works to get it back onto the track! It’s a spectacular
effort and historic in itself.

GT RACER Season One, airing on UKTV’s channel ‘DAVE’ is one of Britain’s top
rated shows on television. Twelve idiosyncratic race teams give a peek at the most
spectacular series of international classic racing, where the most beautiful classic racers
ever built battle it out on the world's most glamorous racing circuits of Europe and
America. The six featured races are: Porto’s Street Circuit, Silverstone’s Historic Grand
Prix, Germany’s Nürburgring, Laguna Seca and Lime Rock Park both in the United
States and the Spa 6 Hours.

GT RACER Season Two, airing on Discovery’s HD Theater in the United States and
worldwide on Discovery HD channels, is now also available as a box-set from Spirit
Level Film, featuring the Nürburgring’s Nordschleife, the Le Mans Classic, the
Master’s Festival at Magny Cours and the legendary Carrera Panamericana. For the
die-hard racing enthusiast and historic racing connoisseur season two’s DVDs feature
two sound tracks; background music ‘on’ and ‘off’. The two sound tracks can be toggled
while viewing by using the audio button of the DVD player’s remote control. This gives
the viewer the option to just enjoy glorious 1960’s engine noises at any time during the
screening. As all GT RACER installments, this season was shot in High Definition (HD)
and considerable work went into the compression and authoring process to maintain the
highest picture quality that is available on standard definition DVDs today to deliver the
top-end GT RACER experienced on any DVD player or computer, in any region
worldwide.

All 11 episodes can be ordered now as one COLLECTOR’S PACK from Spirit Level
Film (with an up to 27% saving over buying the seasons individually):
http://www.spiritlevelfilm.com/gt-racer-pack.html?utm_source=GTRace...

John Galt Films, Inc. is the New York City based boutique production company behind
the program. Owner Alexander Davidis writes, directs and produces the GT RACER TVseries.
He can be reached at info@johngaltfilms.com or by phone: +1 (212) 744.7441.
GT RACER DVD viewing copies are available for editorial reviews.
# # #