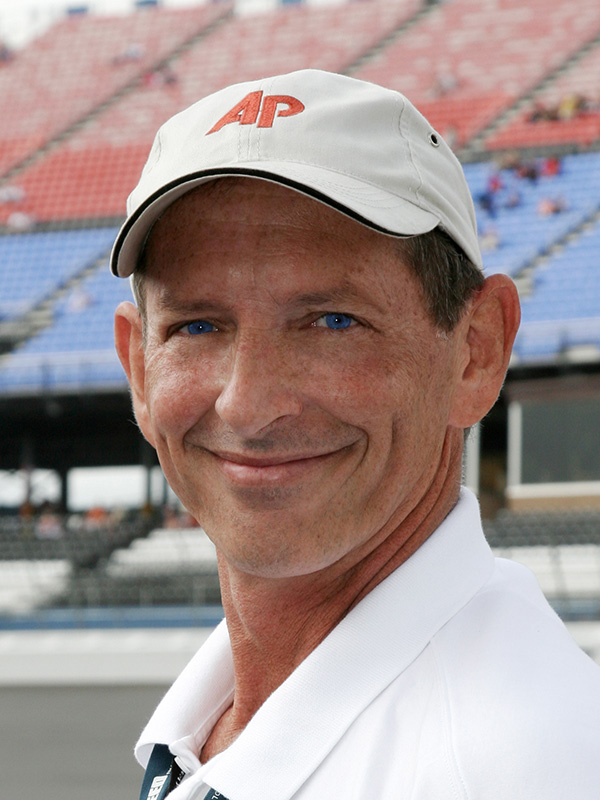 About Me:
I'm a motorsports photojournalist, working with the Associated Press, the Indianapolis Star and other news organizations for twenty years and a member of the American Auto Racing Writers and Broadcasters Association.

I'm an Army Brat, born in Heidelberg, Germany, and have lived in Bangor, Maine, back in Germany near the French border in a little town called Zweibrucken, Nashville and Montgomery . . . but most of my time has been spent either in Atlanta or Columbus, GA where I was essentially raised.

I was a software engineer for 25 years before I finally had enough of sitting in an office for 10-12 hours a day in front of computers and decided to change careers dramatically to something that I have a real passion for. My work has appeared in Sports Illustrated, Time Magazine's Year In Pictures, USA Today, People magazine, The New York Times, Washington Post, Atlanta Constitution, the Indianapolis Star, as well as most newspapers in the country. I'm a member of the American Auto Racing Writers and Broadcasters Association (AARWBA), and while I cover quite a few NASCAR events, my heart lies with the Indianapolis 500 and the FAST cars. (That's why Indianapolis is my 2nd home during the month of May!) I've covered Indy and NASCAR racing since 1989, have been the team photographer for the Columbus Cottonmouths professional hockey team for six seasons, and I've also photographed the Atlanta Thrashers and Atlanta Braves.

Covering auto racing has allowed me to be part of many memorable moments, both good and bad. Jeff Gordon's win at the first Brickyard 400, Buddy Lazier winning the 1996 Indy 500 with several broken vertebrae, Dale Earnhardt (Sr and Jr) winning the Daytona 500, Sam Hornish's dramatic pass at the line to win Indy in 2006, "Danica Mania", Kevin Harvick's photo-finish at Daytona . . . they were all great. But in this dangerous sport there are also dark days, like the 2001 Daytona 500 when Dale Earnhardt crashed in front of me on the last lap, in 1995 at Indianapolis when Stan Fox's car broke in half and he was critically injured in a horrific accident at the start of the 500 and in 1999 when a tire flew into the grandstands at Charlotte Motor Speedway and killed three spectators. And most recently, the horror of watching Carl Edwards fly into the fence at Talladega that thankfully contained him, narrowly avoiding a catastrophe of unspeakable proportions.

PLEASE NOTE THAT MANY OF MY PHOTOS HAVE THE WRONG COPYRIGHT YEAR ON THEM -- SOME ACTUALLY DATE BACK TO THE EARLY 1990'S.

Our condolences go out to the Smith Family and Glenn's friends.

Glenn Stanley Smith, Sr., age 59, professional photojournalist and friend to so many, loving father and grandfather, passed away on October 2, 2015 in Boise, Idaho of complications from pneumonia.  Glenn was born in Heidelberg, Germany to Stanley and Martha Erika Smith. His family had been stationed in Germany at the time of his birth while his father was serving in the US Army. Prior to beginning school, Glenn’s family returned to the states settling in Columbus, Georgia.  Glenn was raised in Columbus and graduated Valedictorian from Hardaway High School before attending Georgia Institute of Technology. He was a member of St. Matthew Lutheran Church and a member of Sons of the American Revolution.

With his education in Computer Science and Engineering, Glenn became CFO and MIS Director for Pekor Pumps in Columbus. Although very successful in his business career and as a software engineer, in 1989 Glenn made the courageous choice to pursue his true passion of photography, particularly motorsports photojournalism, where he became nationally known and honored as “Indy Glenn”. His work has appeared in Sports Illustrated, Time Magazine's Year In Pictures, USA Today, People magazine, The New York Times, Washington Post, Atlanta Constitution, the Indianapolis Star, as well as most newspapers in the country. He was a member of the American Auto Racing Writers and Broadcasters Association (AARWBA), winning the 2009 AARWBA Award for his photograph “End of a Dream”. Glenn’s amazing racing photographs were truly admired by racing fans and will continue to contribute greatly to the enjoyment of auto racing.

Glenn felt blessed to have such a devoted family, wonderful friends and colleagues. He was a compassionate caregiver to his parents, and loving father to his children. Throughout his life, Glenn was a kind, thoughtful, and brave man who always fought the good fight and never lost his uplifting spirit and charming sense of humor even in the most difficult times. He had a complete love for animals and cared for his pets deeply. His great versatility, talents, and vast knowledge allowed him to enjoy many things including cooking, gardening, technology, and politics. Glenn will be profoundly missed and remembered always for his very kind heart, incredible intelligence, and his tremendous gift of giving to others.

He is predeceased by his father, Stanley Smith; his mother, Martha Erika Pohl Smith; and his brother, Kenneth “Clyde” Smith.

He is survived by his daughter, Natalie Smith; his son, Glenn Stanley Smith, Jr.; and his grandson, Cyrus Dayton all of Las Vegas, NV. A private interment will be held at Larissa Cemetery, Mount Selman, Cherokee County, Texas. Memorial gifts may be made to: Boise Kennels, Attn: Mark Fretz, 2303 36th Street, Boise, ID 83703.

Hi Glenn!  I only joined this as a means to get in touch with you. My name is Kelly, and Gail Weibrecht was my Mom. You two used to be friends, and she was a huge fan of your photos. Mom passed away on March 7th of this year.Among her things I found a lot of your photos, and I was hoping we could talk..... Thanks, Kelly  kelly13nj@comcast.net

Robert Metcalf said…
Hi Glenn, I am familiar with your great work. I won't hold it against you that you are a friend of Cat's! Actually, she speaks very highly of you and says you and I should look each other up at a race sometime. I look forward to that.

Conor O'Brien said…
Great photos Glenn and glad to be your friend. There seem to be an awful lot of spectacular crashes in the USA and you obviously have the knack of capturing them in minute detail on camera. Come to Europe where more cars remain on the circuit !
Kind regards Conor

Stephen Page said…
Hi Glenn
You are an awesome talent.
Congratulations for pursuing your dream.
I look forward to meeting you.
Warmest regards - Stephen

Stephen Page said…
Hi Glenn
Great to have you on board !
Welcome to MyVRL.
Please personalize the appearance of your Home Page, join the IRL, NASCAR and your other favorite car Groups, post as many photos as you'd like (and race videos if you have them) and invite your friends to join.
All the best - Stephen Page
Chairman
The Vintage Racing League