SPEED is the primary satellite and digital cable network for auto racing. SPEED covers NASCAR, F1 and most auto racing series. Its website is updated daily with race and driver information. See www.speedtv.com

History
The channel which eventually became Speed Channel was launched on New Year's Day 1996, by Roger L. Werner Jr., E. Roger Williams, Nickolas Rhodes and Robert Scanlon under the name Speedvision. Ownership included Cox Communications, Continental Cable and AT&T. Under their management, Speedvision became the fastest growing cable network of all time while delivering the highest male viewing audience per household of any cable or broadcast network in existence.

In the summer of 2001, Rupert Murdoch's News Corporation purchased one-third of Speedvision. In August 2001, they negotiated to acquire the stakes owned by Cox and Comcast, thus giving them majority ownership. Fox leveraged the network as a negotiating tool for NASCAR television rights which were split with NBC. The plan was to morph the channel into a 24-hour NASCAR network. This plan was ultimately shelved in the fall due to Fox management's unwillingness to place NASCAR races on the channel.

On February 11, 2002 at 7:59 p.m. ET, Speedvision relaunched as Speed Channel. The first program of the new format was a special launch show and 2002 NASCAR preview focusing on Speedweeks 2002. News Corp.'s Fox had a year-old relationship as a NASCAR broadcaster, many NASCAR shows began airing on Speed Channel, a move that was unpopular with some of the network's viewers. However, with the increased NASCAR programming, viewership is at all-time highs, with the channel being added to many regular cable lineups.

Programming Notes
In its nearly four-year existence under its new name, Speed has made an effort to show more live races. In 2001, 2002, and 2006, Speed broadcasted select Champ Car races. In October 2002, Speed bought out the remaining year of ESPN's three-year contract for the NASCAR Craftsman Truck Series, and in February 2003, began showing live exclusive coverage of the series. The network's coverage of the truck series' Florida Dodge Dealers 250 for February 18, 2005 scored a Nielsen rating of 2.1, the highest-rated program in the network's history. Another Speed staple is WindTunnel with Dave Despain, a live call-in show that has been on the network since February 2003.

Since its inception in 1996, there has been a racing series which was created by Werner, Williams and Scanlon, named after the network-the SPEED World Challenge, formerly named, not surprisingly, the Speedvision World Challenge. Speed also runs a very short segment during its commercial breaks, titled, "My First Car", in which celebrities like Ron Howard, Pierce Brosnan, and George Lucas (who has a great love for Fiat) and Speed Channel viewers talk about the first set of wheels they ever drove.

Speed made news with the 2005 firing of network president Jim Liberatore, who had been with the network since FOX bought it in 2001 when it was still Speedvision, reportedly because Liberatore had wanted to reduce the number of NASCAR-related shows on the network, and the network brass wanted more NASCAR-related programming. Liberatore is now attempting to start a new network called The Racing Network, which will be closer to the original Speedvision. In 2002, Speedvision had collaborated with Disney, causing the channel to resemble the Disney Channel in some ways, making the channel targeted for younger viewers in the pre-teen and teenage. This angered some network viewers, who feared that Speed was close to becoming an all-NASCAR channel. However, NASCAR programming continues to draw viewers to the network. Some Speed viewers have suggested a second channel for non-NASCAR programming, just like ESPN has with ESPN2.

Distribution
Speed is primarily a satellite and digital cable network, although many areas in the U.S. do have the network in their basic cable packages. It is also available in Canada and in Brazil. Racing coverage, particularly that of Formula One, is sometimes subject to blackout outside the U.S. In the spring of 2006, Speed launched Speed Mobile, where fans can download ringtones and wallpapers made by Speed to their cell phones.

Name Change
In late 2005, Speed Channel re-branded themselves as SPEED, canceling some TV shows including NASCAR Nation. Sometime in 2007, the change became official, as the word "channel" was dropped from its logo.

You need to be a member of SPEED TV Group to add comments!

Comment by T2V Racing & Restoration on September 12, 2011 at 12:25pm
THX for the Great coverage of my shop and MK4 on Monterey Motorsports Reunion show yesterday!

Comment by David Harris on May 17, 2010 at 4:31pm
BTW, in July, we will be launching our new broadband channel, SPEED 2. It will focus mainly on European Road Racing, Victory by Design and many of the original Speedvision racing series. And 'no,' it won;t be turned into a NASCAR network as SPEED2 has been created precisely for this purpose.

Comment by T2V Racing & Restoration on May 17, 2010 at 3:41pm
Hope to be seeing you at the Monterey Historics this year--look for my Townsend Typhoon to be racing for it's 5 year straight!

Comment by Bob Dompe on August 1, 2009 at 12:50am
Received notification that COMCAST will extend HD cable service in the SF Bay Area to include Speed HD starting 10 September. That means, Monza, Singapore, Brazil, and Abu Dhabi will be easily available in HD without having to put up with FOX coverage. Maybe we'll see a Schumi win in HD!

Comment by Bob Dompe on July 6, 2009 at 9:28pm
For those who take cable service from COMCAST in the San Francisco Bay Area, www.engadgethd.com reports that Speed HD will be carried starting November 25th.

F1 in HD is great but the price for seeing it now on cable is having to watch on the Fox Sports network. It may be the same announcing crew but they are forced to aim at a non-enthusiast audience and much of the coverage is cut to fit in a two hour time slot.

Comment by Stephen Page on October 21, 2008 at 10:55am
The Monterey Historics are rated amoung SPEED TV's Top 5 Shows: 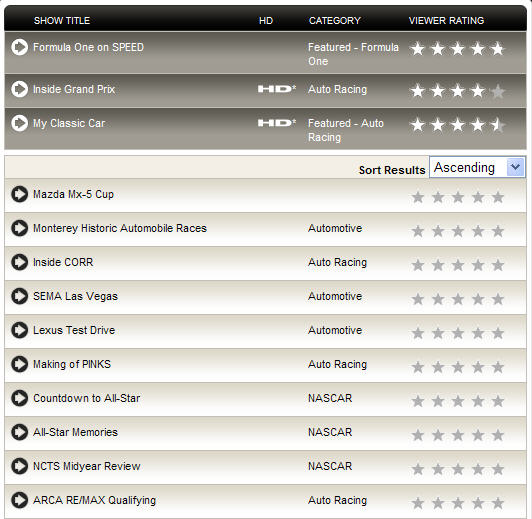 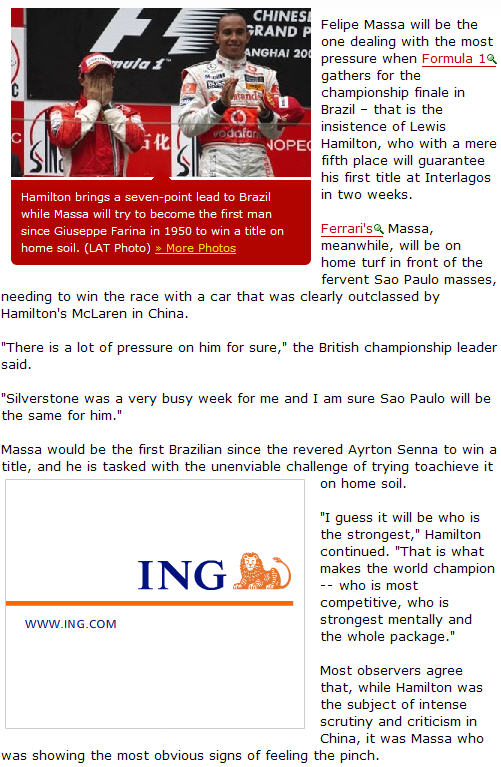 Comment by Stephen Page on October 21, 2008 at 10:43am
For the most comprehensive Racing coverage, both TV and web based, see www.speedtv.com

Comment by Stephen Page on October 21, 2008 at 10:39am
Answers to Frequently Asked Questions

HOW DO I GET SPEED ON-AIR TALENT EMAIL ADDRESSES?

In general, it is our policy not to give out personal e-mail addresses for our talent. However, we encourage you to send your email comments and questions. If your message is directed at a specific on-air person, check the ON-AIR TALENT page for their bio and contact info (if available). Otherwise, click on the program link and direct your message to the program mailbox. Of course, you can always send messages to viewermail@speedtv.com and we will forward on to them!


CAN I STILL RECEIVE SPEED ON C-BAND?


HOW DO I SEARCH A PARTICULAR PROGRAM?

Miss a show? Want to see it again? Search for future telecasts over the next month, using the Search tool on our Program Schedule page.


HOW DO I PURCHASE A VIDEOTAPE OF A GIVEN PROGRAM?

We regularly receive requests from viewers looking to purchase videotapes/DVDs of specific SPEED programs. At this time we are unable to accommodate these requests. However, select SPEED programs are available On Demand, either through your cable provider or online. Check out SPEED onDemand for more information.

If you are have trouble with the search and filter features on the SPEED Program Schedule please be sure to check out the HELP section for instructions on how to best use the system to find broadcast information for your favorite SPEED programming.


HOW DO I PRINT OUT A PROGRAMMING SCHEDULE?

All SPEEDtv.com viewers are capable of printing out an entire weeks schedule by clicking on the “week of” button on the Program Schedule Page, and then use the Printer Friendly View button to have the week put on one page for printing.


WHAT EVENTS ARE BLACKED-OUT AND WHEN?


NOBODY ANSWERS MY EMAILS!

If you sent us an e-mail recently your comments and feedback are greatly appreciated and we commit ourselves to reading them all. However, due to the quantity of emails we receive, we may not be able to answer every email. If your question does not receive a response, we ask that you please try contacting us again and mention that it is a repeat request. Thanks for you understanding and cooperation.


HOW DO I GET SPEED?

If you do not have SPEED yet, please contact your cable or satellite television provider.


IS SPEED ALL NASCAR?

In an effort to become a complete motorsports network, SPEED is committed to bringing its viewers the number one racing series and spectator sport in North America. Along with NASCAR we are committed to bring top-notch road racing from around the world including Formula One, American LeMans Series, SPEED World Challenge, Grand American, and FIM/AMA Motorcycle Racing.