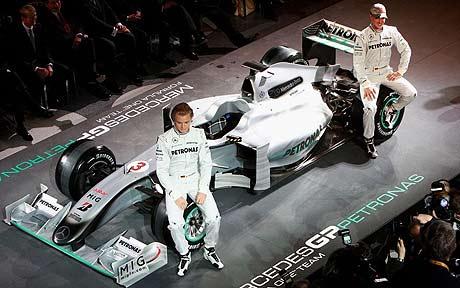 Read my"controversial" comment at the bottom of this page

You probably know by now that 7-time Formula 1 World Champion Michael Schumacher is returning to the sport he loves, coming out of retirement to drive for the Mercedes GP-Petronas F1 team and reunite with Ross Brawn, the man who has been such a vital part of Schumacher’s career. Here, Schumacher’s shown at Jerez, in Spain, where he test drove a GP2 car for 52 laps yesterday…all part of the process to help bring the talented German up to speed again, and to help him get used to the forces on the head and neck that only a Formula 1 car can produce.
So here’s the burning question: At 41, is Michael Schumacher too old to do well in F1?

The statement above is from a Road & Track article...my question is, why wouldn't he win at 41 years old, or 51 years old ? It's not like Formula 1 racing (or any motorsport other than motocross) is on an athletic comparison with swimming, running or motocross.
Let's not over-estimate the drivers athletic ability compared to what it really takes to win in motorsports; a ton of money, a well-organized team (which also takes a ton of money)...whoever has the most money to spend will find the most talented employees...that's the bottom line. It also takes superior technology, which takes a ton of money.
If Morgan Shepard (long time Nascar competitor) had the right financial backing he would be running with the big name drivers, and he's 70 years old ! That should tell you something.