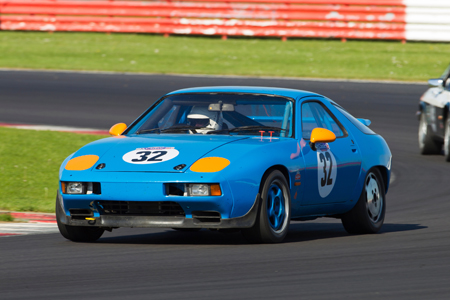 928 Spares is based in Stroud, Gloustershire and is managed by Paul Anderson. Paul is considered as one of the UK’s leading experts on the Porsche 928.  928 Spares carry out a range of services which includes modifications, servicing, and part manufactured and fitted. Paul will also provide race preparation services, and has over 8 years experience prepping his own car and others. Currently competing in the HSCC 70’s Roadsports Championships, which he finished a respectable 2nd in class over all in 2007.

The 928 is regarded by many as the forgotten Porsche, it generally receives very little coverage in the classic car press. It’s a quick comfortable ride which packs a big V8 engine under the bonnet. Though it’s a thirsty beast with most 928’s only managing around 20 mpg, a lot of owners tend to use them as second cars which negates this issue. In its heyday the 928 was an expensive car and was always marked as a GT. In recent years they’ve become popular as track cars or have been stripped out for use on the historic track and rally racing championships which have seen a marked increase in popularity.

The cost of a 928 can vary in price and because of its thirsty nature this can dictate price of a car especially if the price of fuel is high. It’s not impossible to pick up a reasonably good condition 928 for under 3 grand. The body work of the 928 was galvanised, which generally means there is very little rust on most 928’s. Mechanically they’re quite a sound investment, with the most common failure being the cambelt, which will probably need to be changed every 4-6 years. They can also suffer from electrical issues if they’ve not been driven in a while and left to stand. Some of the older cars can suffer from problems with the air-conditioning, and it’s most likely this will need to be repaired at some point.

The development of the 928 started around 1971, and it was originally designed by Porsche as an eventual replacement of the iconic 911. But with the economic turmoil of the early 70’s, long term recession and rising fuel prices. Porsche decided it wasn’t the right time to launch a new sports car onto the market, especially one that was very thirsty on fuel.

So in 1977 Porsche finally launched the car at the Geneva Motor Show, a year later in 78 the 928 was named car of the year, this was the first time a sports car had been awarded the accolade. The 928 was a successful car with several variations designed and built during its lifetime. The last design put into production was the 928 GTS, which had a maximum speed of 170 mph. Production of the 928 finally came to a close in 1995. The 928 never did replace the 911, it just failed to capture the interest of the 911 enthusiasts but it was still a very successful selling car in its heyday.