When you try to think of a city that makes a habit of celebrating the automobile, for most of us, New York probably doesn’t come immediately to mind. So you might be surprised to learn that, every year about a million people go to the NY Auto Show and more than double that used to visit the late, lamented Louis Vuitton Classic concours in Rockefeller Center. So when the Museum of Modern Art (MOMA) chose to celebrate the acquisition of three new cars with an exhibit called AUTObodies: Speed, Sport, Transport, no one should have been surprised. 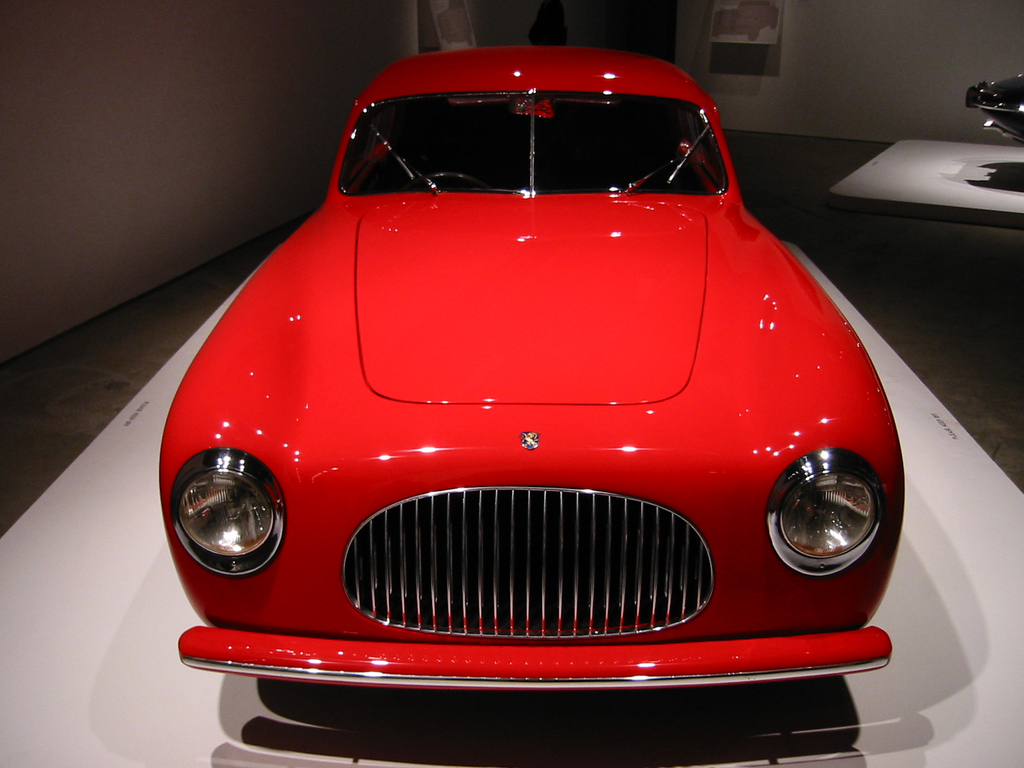 MOMA has had a decades-long fascination with beautiful, yet functional, mechanical things. High tech looking Swedish saw blades, sensuously sculpted glassware, delicate Italian table lamps and, of course, beautiful automobiles are all part of their permanent collection. Naturally, Italian cars are prominently represented. As you enter the exhibit, you are greeted by a blood red 1946 Cisitalia “202” GT Car. This was the very first car acquired by MOMA and easily its most beautiful. Built by Pinin Farina (as he was called back then), this car’s design broke “many rust-covered rules” that said you had to have a box for the people and a box for the motor. Pininfarina said. “The car had to have pure, smooth, essential lines.” As you stand and stare at the elegant simplicity of its design, you can sense what the exhibit’s curator, Peter Reed, calls a design that, “seems to epitomize a sense of postwar optimism.” 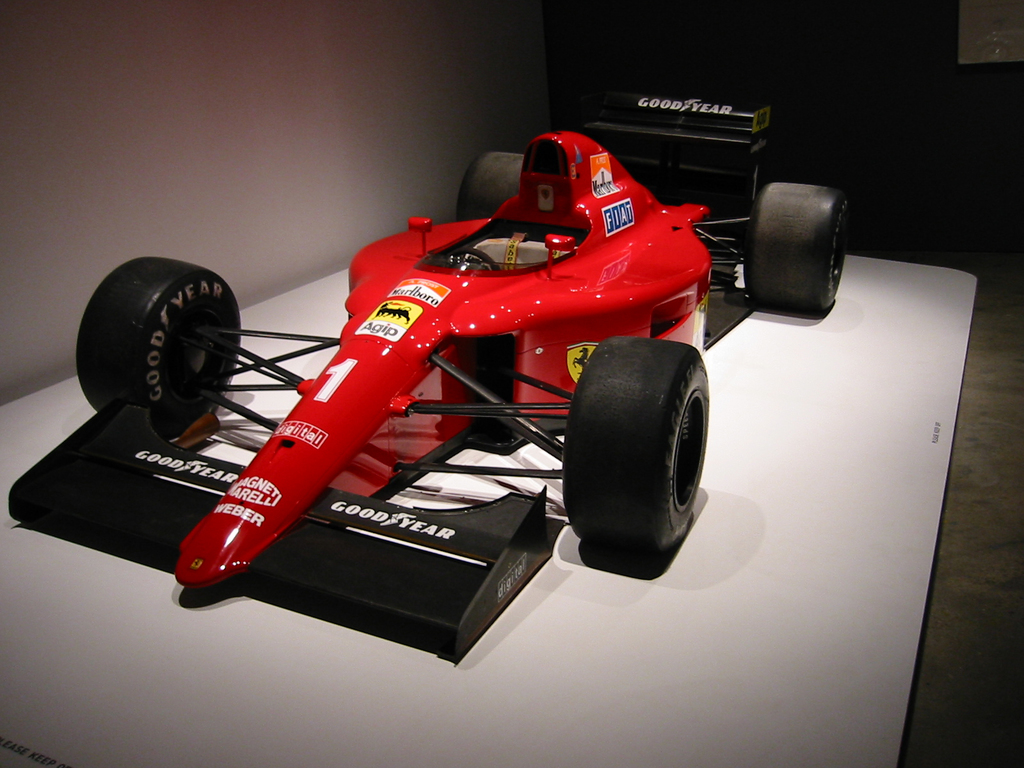 The other car in the exhibit that Forza readers will find interesting is Alan Prost’s 1990 Formula 1 Ferrari 641/2. This is a John Barnard design and it exudes his penchant for a “homogenous shape.” In a 1993 interview he is quoted as saying, “Unless there’s a really strong reason to have a break in a line, with an eyebrow or a blister or something like that, then the lines should all be flowing. I think there’s an inherent aerodynamic quality to that.” Again, standing along side the car, sighting down its flanks, you can almost feel the wind being cheated by the genius of his design and sense the tons of downforce generated by the huge front and rear wings. It is not often that mere mortals can stand so close to an F1 car. But with this exhibit, anyone with the price of admission can stand inches away from a car that won 6 Grand Prix races. You can study details that a few years ago were guarded with the same passion as military secrets. I was in the F1 paddock at Montreal when this car was being campaigned and a mechanic thrust his hand in front of my lens as I was trying to make an artistic photo of the car’s nose – “Enough of that, mate!” he said. Now, anyone can snap away and no one notices.

The other cars in the exhibit – a 1963 Jaguar E-Type, a 1959 VW Type 1 (i.e., the Beetle), a 1952 Willys-Overland Motors “Jeep” and a Smart Car (product of the DaimlerChrysler Group) – all represented what the Museum’s curator called breakthroughs in speed, sport and transport. Curator Peter Reed writes, “The six automobiles in the…collection…are innovative designs representing a range of purposes, such as speed, sport and transport. Individually, the automobiles are recognized for their aesthetic excellence, functional capability, historical significance, practicality, or affordability. I guess that most New Yorkers have seen a Jag, VW and Jeep, but the Smart car’s unique packaging had most exhibit visitors circling its tiny 8-foot shape. I could almost read the minds of real City dwellers dreaming of how they could squeeze the Smart car into a precious on-the-street parking space (always a major coup). Having personally done battle for over 30 years in the dog-eat-dog world of City parking, the Smart would be my current weapon of choice. It combines a dent resistant body with a size that would let you park in spaces that would be a tight squeeze with a motorcycle. Add to that a certain hip sense of style and you have a design that transcends mundane transportation. 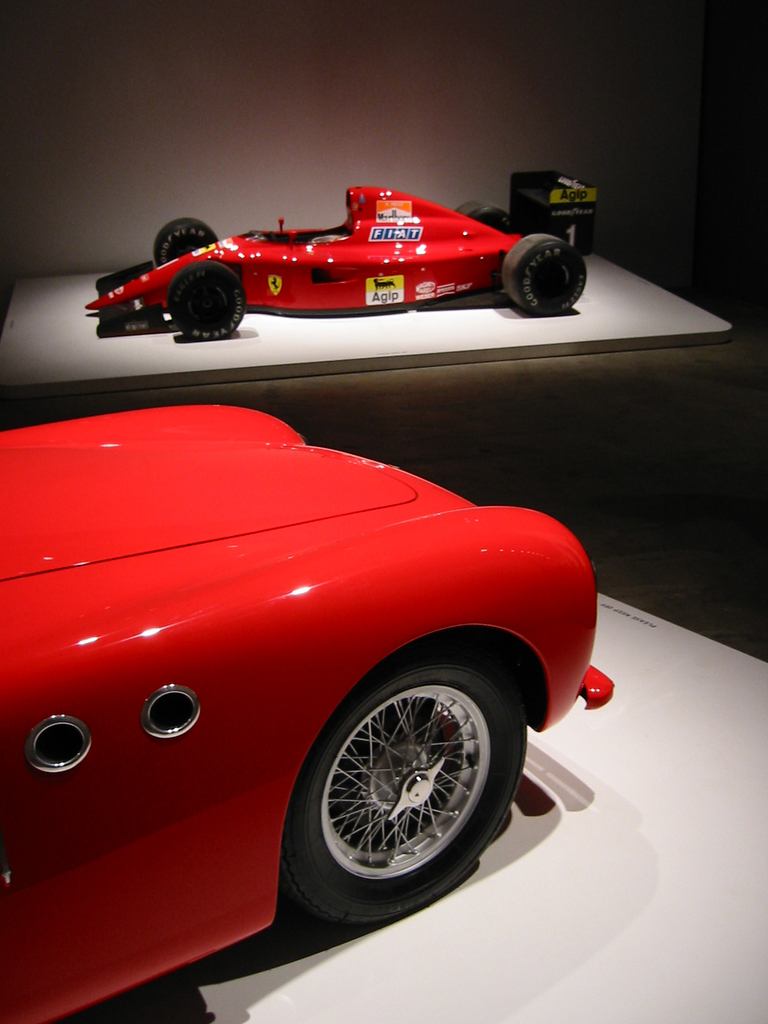