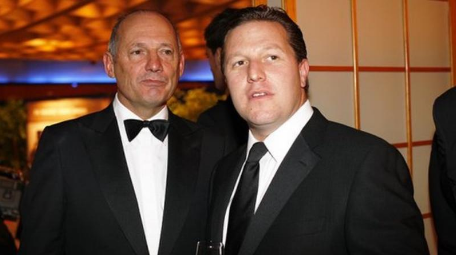 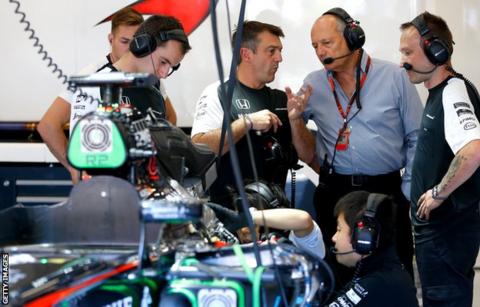 
A surprise new name has emerged as a potential successor to long-standing McLaren boss Ron Dennis, whose position as chairman is under threat.

Leading F1 commercial figure Zak Brown has been contacted by McLaren as the company seeks a replacement.

Dennis has been told by the two parties that own 75% of McLaren Group that his contract will not be renewed for 2017.

The US media group Liberty is in the process of buying a controlling interest in the sport's commercial arm from investment group CVC Capital Partners.

The deal is expected to be completed early next year.

Brown is of particular interest to McLaren because of his success in finding new sponsors for a number of teams on the grid in his former role as boss of the marketing agency JMI, from which he resigned in September.

McLaren have not had a title sponsor since parting company with mobile phone company Vodafone at the end of 2013.

Ironically, McLaren have had a major success in recent weeks in securing a new partnership deal for BP/Castrol to become their fuel and lubricant supplier.

The deal has been signed but has not yet been announced.

The company will replace Exxon Mobil, which has been poached by Red Bull for next season after 21 years with McLaren. That deal is expected to be announced imminently.

The three names revealed by BBC Sport over the US Grand Prix weekend - ex-F1 team bosses Ross Brawn, Martin Whitmarsh and former Sainsbury's boss Justin King - remain of interest to McLaren and have been contacted by the team.

But all three are now considered unlikely to take on the position. They may be unwilling to put themselves forward or it may be decided they are not the best person for the role.


It is also possible Dennis, who is chairman and chief executive officer and has been in charge at McLaren for 35 years, would be replaced by two different people, as would be a more conventional company structure.

Brown is friendly with all the main shareholders at McLaren, including Dennis.

But BBC Sport understands that the Bahrainis and Ojjeh are now reaching out to him as they seek a new man to run the company.

If McLaren can persuade him to take the role, it would be something of a coup for the team, since it has long been known that Brown has been favourite for the commercial head of F1 job at Liberty Media.

Despite the ultimatum by his fellow shareholders, Dennis has been telling friends and confidants that he will decide when or if he will step down, not anyone else.

But it is far from clear that he is in a position to make that decision.

If his contract is not renewed, he would remain a 25% shareholder but would probably have no active role or power in running the company.

Dennis will fight hard to retain his position as the head of McLaren, despite the fracturing of relationships between him on the one hand and Ojjeh and the Bahrainis on the other.

He has run the company since 1981 and has become synonymous with McLaren, which he has built up into one of the sport's most successful teams, as well as launching a road-car company that sells high-end supercars.

Dennis had been trying to find investment to enable him to buy a controlling shareholding in McLaren Group.

He did have an agreement with Ojjeh and Mumtalakat that he could buy sufficient shares to take him over over 50% were he to find that investment.

One was on the verge of completing a deal with Dennis before a weakening of the Chinese economy caused the arrangement to collapse.

He then sourced a second group of Chinese investors and took them to Ojjeh and Mumtalkat, who refused to sell their shares because they did not want to grant Dennis so much power in the company.