2016 Pan-Am Champions are Hilaire and Laura Damirón, probably the most handsome husband and wife team in auto sports. 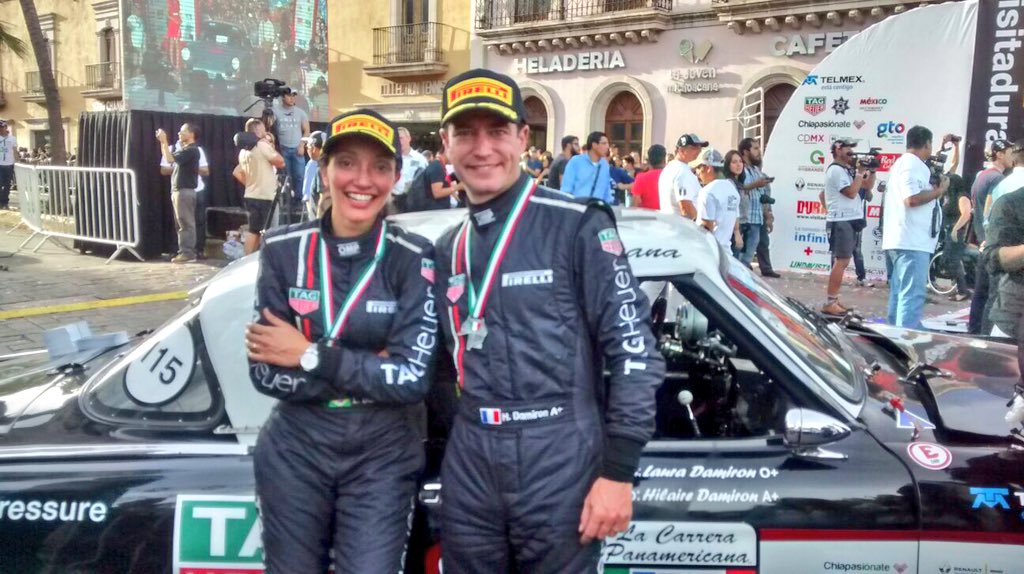 After years of trying, the 2016 Pan-Am Champions are Hilaire and Laura Damirón, probably the most handsome husband and wife team in auto sports.  He is French and she is from Brazil.  They won by a convincing 2:11 over Emilio Velazquez and Javier Martin, the past champions.  Doug Mockett (US-Virgin Islands) and his new navigator, Manuel Iguiniz (Mexico), were fourth.

Looking at the official results, it was not a good year for the U.S. contingent.  Please: my notes, based in part on rumor and speculation, have not been checked by the competitors mentioned, so some corrections may be necessary.

Jack Rogers – after leading Historic C for two days in his well-prepared Mustang, Jack and “CJ” Strupp developed engine problems, finishing 29th overall, 9th in Historic C.  “Jack will be back,” for sure!  After all, he holds several land speed records at Bonneville and elsewhere.

Steve Walters and Fegus Fay – put up a valiant fight but crashed their classic Mercedes, ending in 34th.

Michael and Kristi Shoemaker – struggled to stay in the event after busting a motor mount, and finished 40th.

Gerie Bledsoe and “El Fer” Garcia – they managed to avoid dropping 500 feet down the mountain on Mil Cumbres, but after being whacked by a hostile tree, their car could not continue, ending in 42d place overall.   Richard Tomlin, the relief co-driver, had finished 20th overall the day before, proving the car had “cojones mas grandes.”

Pedro Vidal – our favorite friend from Miami struggled with transmission and axle problems, ending in 48th.  What a saga!

Michael Marino – a rookie from Rhode Island, developed lifter problems in his Mustang early on, 49th.  He promises to be baaaaaack!

Mark Colbert – was reportedly moved to Exhibition because his primo Ford Escort’s race engine was fuel injected.  He’s listed in 52d place.  We do not know for a fact that he ran one speed stage.

Don Yount – has already published an article about his spectacular “off” on Day 3 that destroyed his $100,000 vintage Porsche 911.  Yount also appears to be an eye witness to the accident that took the life of the BMW motorcycle rider.  Read his story at http://www.thedrive.com/vintage/5598/i-nearly-died-racing-my-vintag....  Based on what he has written, sadly, he did not seemed adequately prepared, at least mentally, for this type of endurance rally.

In addition to Mockett’s near-podium finish, the only other bright spot among the “norteamericano” contingent was Karlo Flores (Canada) and Juan Salgado (Mexico) in their 356 that ended in 15th overall, second in class.  Well done, amigos.

Not too long ago, the U.S. and Canada contributed as many as 57 of 81 Pan-Am entries.  Those days seem long gone.  Even European entries are way down.  Que paso?

Please note:  when reading the final results, remember that the timing system used by the Pan-Am calculates and inputs times for cars that are not running based on the times of the lead car in their class, plus penalties for missing speed stages and the finishing arch.  This keeps cars, even those on trailers, “in the race,” so they will be encourage to make the repairs and re-join the melee.

Suffice it to say, that of the 60 vintage Pan-Am cars that started the race, it is estimated that around 28 rolled across the finish line in Durango under their own power.  Yep, less than 50% finished, probably the highest attrition rate in modern Pan-Am history.  Again, one must ask – que paso?  Of these 28, perhaps a majority had missed at least one day because of mechanical failure.  These numbers do not include the nine modern BMW Minis that were running in separate competition within the Pan-Am.  This reporter does not know whether or not the BMW motorcycles riders were actually engaged in a sanctioned racing event, as a part of the Pan-Am, or whether the road was open or closed when the accident happened.  The reports are somewhat conflicting.

**DAILY NOTES ON THE “PANA-MONIUM”

On Day 0 – qualifying day – at least five Pan-Am cars went out with mechanical problems before the race started with at least one suffering engine failure.  Day 0 began with a long transit in heavy traffic and a “warm-up” stage of 9 KM, followed by a speed stage of 9 KM.   This format seemed to encourage crews to drive full-out in the speed stage.  Given the long transit to the stages and the longer  drive back to the starting point, it was a long day, hard on the equipment and crews.

Day 1 -- the cars ran the same two qualifying stages as Day 0, and then several new stages on the way to the beautiful mountain city of Jalpan in the Sierra Gorda mountains.  The rising sun was a problem in the initial stages, blinding drivers going into some corners.  The long 27 KM stage along this route must be rated as one of the best in the entire event, up there with Mil Cumbres and the original La Bufa.   After service in Japlan, the cars returned on the same route, running the speed stages in the opposite direction.  Sadly, on the transit to Puebla, several cars got stuck in a major traffic jam at the toll booth on the bypass around Mexico City, arriving too late to turn in their time cards.  One of the modern Minis crashed badly one this day but the crew was OK.

Day 2 -- the race cars exited Puebla early in the morning without a problem, but hit a major traffic jam on the toll road caused by a wrecked semi.  Even Lalo Leon, the event’s president emeritus, was seen helping to push a ratty Pan-Am car that had overheated.  The route for Day 2 went into the mountains of Oaxaca, where most of the roads have been resurfaced, making driving a joy.  After turning around in Huajuapan, the cars ran the same stages in the opposite direction on their way to Tehuacán for the annual Pan-Am street fiesta.  The cars ended the day by a long transit into Mexico City, always an adventure, pausing for a PR event in the historic center, and then stopping for the night in the posh, commercial barrio of Santa Fe.

Day 3 -- everyone headed over the mountain to Toluca, really just an industrial suburb of Mexico City, to run speed stages south of the city and back again.  Again attrition was high.  Several cars suffered severe damages from hitting speed bumps (“topes”).  At least one support crew worked all that night to install a new engine in a Datsun 240, only to find out that the starter would not work and the firing order was messed up.  Reportedly, by the end of this day at least three Mexican cars, some in the top five, had dropped out because of engine failure.  The vintage Porsche 911, driven by Mr. Yount, mentioned above was totally this day.

Day 4 -- the race was on to Morelia, down the mountain road known as Mil Cumbres, “the Green Hell.”  At least on car was lost along the way, while others limped into town.  Service crews, the unsung heroes of this event, worked late into the night to get the cars, like the Pedro’s Austin Mini from Miami, back on the road, along with the classic Mercedes 220 and BMW 2002, all victims of topes.

Day 5 – all running cars, now a minority, headed back up Mil Cumbres and then on to Guanajuato.  Several experienced mechanical problem along the way, while one rat-rod Nova managing to fall ass-backwards over the edge of a bottomless cliff.  Fortunately, a tree blocked its descent into the jungle. That same tree also rendered the car a total loss.  As usual, the racers’ arrival into the streets of Guanajuato was occasion for an extended celebration.

Day 6 – the competitors headed back over the mountains outside of Guanajuato, through Leon and Aguascalientes, to test their mettle on a tricky stage called La Congoja, which goes up to a small village in the middle of nowhere.  After an hour they race back down the mountain and then transit to what is left of La Bufa, the famous speed stage outside their final destination, Zacatecas.   Only 28 vintage Pan-Am cars were counted as running on La Bufa, along with six or seven modern Minis.  Regardless, the reception on the streets of Zacatecas and the party provided by the local car club that followed were wonderful, as was the weather.  There was dancing in the streets!

Day 7 – in recent years, this day begins with a 185 mile transit from Zacatecas to Durango.  After the cars arrive in Durango, they check in and continue on to speed stages down the mountain toward Matzatlan, before making a u-turn to race up the old highway to Durango, running a stage on the famous “Backbone of the Devil.”  There is no count available of the number of Pan-Am cars that actually crossed the finish line under their own power.

Why run the Chihuahua Express?  Simple.

n  Return to the same hotel each night, with time to prep cars and even socialize

Early registration is now open.  Until January 1, the early registration fee will be $3,300 USD.  After January 1 $3,600.  Payment may be made by personal or company check, wired funds, or bank transfer. PayPal is also an option. Please contact Gerie Bledsoe gbledso@aol.com for an application form and Q & A sheet.

According to the organizer, Arq. Chacho Medina, the route will be virtually the same as last year.   His repeated efforts this year to find an acceptable route for a fourth day were futile, as the few alternative routes were simply not suitable for high speed racing or they repeated in large part the long transit of Day 2.   The additional cost of a fourth day was also a negative factor, since Chacho is committed to keeping the entry fee as low as possible.  In fact, he has pledged to increase the fee in the future only by the increase in the CPI or his actual costs.

For more information, go to www.chihuahuaexpress.com.

Not ready to drive at full speed up and down the mountains of Chihuahua?  Come on down for the Xpress Tour.  Bring your favorite car or fly in and rent one at the airport.  The Tour is a time-to-distance (TSD) rally along the same roads travelled by the full-competition cars.  In a TSD rally the goal is to arrive at the checkpoints as close to your car’s (calculated) “target time” as possible.  All cars have a route book to follow, so you won’t get lost.  It’s fun for the driver and a learning experience for the navigator, who is required in each car.  It’s good practice for full competition later.  Prizes are awarded daily and at the end for the “most perfect” crews.  Entry fee for the Tour is $1,200 USD until January 1; $1,400 afterwards.  The Tour is a natural for American and Mexican hot rods and “specials.”  Come on down!  Run one day, two days or all three. Just do not miss the drive to the edge of the famous Copper Canyon.

Rooms at the luxury Sheraton Hotel Chihuahua are extra for all competitors.  $165 per night, booked through Chacho Medina.

Auto sports is dangerous, and rallying in Mexico is no exception.  All competitors will be required to sign a waiver assuming all responsibility for their actions and holding the organizers and their agents harmless.

Gerie - thank you for the great report.

All the best - Stephen