Ben Simms took a convincing victory in the Chichester Cup for pre ’62 Formula Juniors from early leader, Sir John Chisholm. The latter blasted ahead from pole position aboard his Gemini Mk3A only for Elva man Simms to scythe past on the inside into Woodcote.

At quarter-distance into the 20-minute race the order remained static as the safety car was deployed to attend to stricken cars. With racing resuming with ten minutes left to run, Chisholm and Simms resumed their private battle as they streaked ahead of the chasing pack. Simms was last of the late brakers as he fought to keep his twitchy short wheelbase car ahead of the faster Gemini. He held on to the flag to win by 0.4-second with Elva man Chris Drake fishing third some 29.7-second behind them.

“He didn’t make it easy,” said a delighted Simms. “The safety car bunched us up but it was close right to the end once we began racing again. There was a lot of oil out there which focussed the attention.” The Detroit-based Briton had a poor start from the all ERA front row, losing out initially to J Mac Hulbert and Paddins Dowling, the latter taking the initiative as they headed through Madgwick towards Fordwater for the first time.

Gillies moved up to second through the kink before St Mary’s on the following lap, the gap to Dowling remaining static at 1.2-seconds to the end of the fourth lap. Into the fifth tour, Irishman Dowling experienced car trouble and retired shortly thereafter.

Matt Grist moved his way up the order in the fastest of the Alfa Romeo Tipo Bs, taking second place with six minutes to go as Hulbert performed a series of heroic saves after oil spilled onto his rear tyres. Up front Gillies was unchallenged and led home Grist by eight seconds from Maserati driver Frank Stipler who jumped Hulbert in the dying stages. Julian Majzub finished fifth aboard his Alfa Romeo 308C.

“I have a history of bad starts here,” said the victor later. “Paddins kept me honest in the opening laps and it was a shame that he retired. The car’s fantastic here. It’s a magic car, a magic circuit and a magic event.” The 2010 Goodwood Revival witnessed a special celebration of 60 years of the BRM marque. More than 30 cars spanning more than three decades of the Bourne squad’s history took to the circuit, ranging from the famous – infamous even – V16 P15 Mk1 to the Collier Collection’s 1962 Formula One World Championship-winning R578 ‘Old Faithful’.

Among the many BRM ‘old boys’ in attendance was Richard Attwood, who famously finished a fighting second in the 1968 Monaco Grand Prix on being recalled to the team at very short notice. The Le Mans victor said: “I had a good relationship with BRM during an era when it was doing relatively well. I really admired the effort of the Rubery Owen Group for sticking with it and racing for Great Britain.” 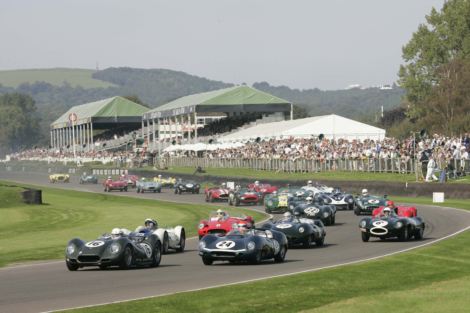 A Magical step back in time

The Goodwood Revival really is a magical step back in time, a unique chance to revel in the glamour and allure of motor racing in the romantic time capsule of the golden era of motor racing at one of the world’s most authentic circuits.

The Revival is the world’s most popular historic motor race meeting and the only event of its kind to be staged entirely in the nostalgic time capsule of the 1940s, 50s and 60s that relives the glory days of Goodwood Motor Circuit. It is the biggest and best historic motor racing party of the year.

The Revival offers visitors the opportunity to leave the ‘modern world’ behind and join motor sport luminaries including Sir Stirling Moss, Richard Attwood, John Surtees and Derek Bell in an unabashed celebration of flat-out wheel-to-wheel racing around a classic racetrack, untouched by the modern world.

For the Goodwood Ticket Sales Office: