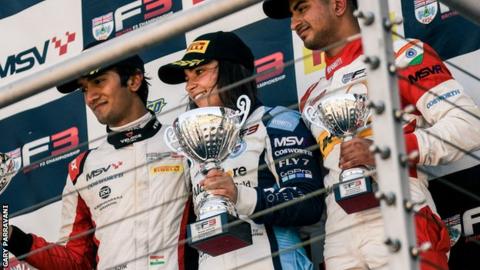 Jamie Chadwick started karting when she was 11 years old

Jamie Chadwick has spent her career racing in a "male dominated" sport and says her British Formula 3 win shows there needs to be a "step forward" in getting more women involved.

The 20-year-old Briton became the first woman to win a British F3 race at the weekend.

In doing so, she added her name to a prestigious list of former winners who include F1 legends Ayrton Senna, Mika Hakkinen and Daniel Ricciardo.

"Because I got into racing at such a young age I was pretty oblivious to that kind of thing," said Chadwick, when discussing being the only female on the grid.

It was Chadwick's older brother Ollie who got her interested in racing and she started karting at the age of 11.

A scholarship got her into the Ginetta Junior Championship before signing for Aston Martin in the GT4.

Together with team-mate Ross Gunn they secured the British GT4 title in their first year - and Chadwick became the youngest driver and first female to win the title.

She moved to single-seaters in 2017 and made the podium in the British F3 Championship in her first season, eventually finishing ninth in the championship.

Chadwick says apart from a different changing room, she is treated no differently in the paddock.

"My engineer says he deals with me like every other racing driver and that is exactly how I wanted to be treated," she says.

"I have gone through my whole career being, more often than not, the only female racing.

"One of the nice things is how supportive the other drivers are. But when we are out on track we all want to win and beat each other. They do not want to beat me more than anyone else because I am a girl."

'I have to work on the physical aspect'

"If you drive on the motorway and hold your hand out of the window you feel the force that generates, now imagine that at 160mph around corners," says Chadwick describing driving an F3 car.

The Bath-born racer says the G-force and the weight of steering are some of the challenges she struggles with.

"Women have around 30% less lean muscle mass than men. That is no excuse because you need a certain level of strength to race the car and I can get to that," said Chadwick.

"It is something I have to work the hardest on. As I move up the ranks it is only going to get tougher.

"I know a few male racing drivers talk about the mental side of it and mental toughness, but that is something I have never had an issue with. I think emotionally, the way I work as a female sometimes is my advantage as I lay everything on the table."

Chadwick says she has "never thought" of her gender as being an issue in the sport, but her recent win has "showcased" the lack of females in the sport.

"It is still male dominated and we need to get more women involved," she said. "The fact I have only just broken the record shows we need to make a step forward."

F1 has not had a female driver since Giovanna Amati in 1992, but more recently there have been female test drivers such as Britain's Susie Wolff.

"Unfortunately it does require a lot of backing, but if the right person comes along, there is no reason why a female can't make it in F1," said Chadwick.

"The only way to get the right person is to increase participation at grassroots levels.

"I just want to prove it's possible. I know when I drive my best, there is nothing stopping me from being one of the best and there is no reason why there wouldn't be the same case for girls coming through in karting to get the same opportunity in F3."

Chadwick says she needs to win a few more F3 races before she can start to "merit" a move up.

Chadwick is aiming for more wins in the final races of the season and she will look at making the next step up to European F3 or racing in America.

'Monger is faster now than before his accident'

One of Chadwick's rivals is Monger.

The 18-year-old had both his legs amputated after a crash last year and drives a specially adapted Tatuus Cosworth car.

"When you are racing he is just another driver you want to beat," adds Chadwick.

"I raced him before his accident and I think he is faster now than before, he is so mentally strong and he can't be broken. He is tough to beat, but fortunately I got my first win before him."