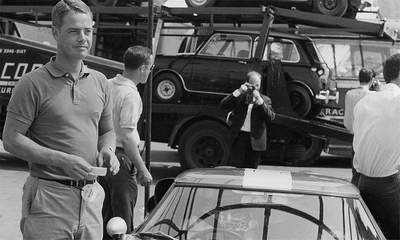 Augie Pabst on Wednesday received the 2010 Bob Akin Award from the Road Racing Drivers Club in Daytona Beach, Fla. Pabst drove a Meister Brauser Scarab to the 1959 USAC Road Racing Championship and the SCCA B-Modified Championship in 1960. He also won the Road America 500 in 1961, '63 and '64.

The Akin award is the top award for amateur, vintage/historic or semiprofessional drivers. The RRDC gives the award in honor of Akin, who died in a racing accident in 2002. It is awarded to the driver who best exemplifies Akin's qualities, including a passion for motorsports, automobiles and sportsmanship, and who has contributed to the sport of motor racing.

“I feel honored and humbled to receive this award because I thought Bob was such a great person and a fabulous driver. He was a good sport and sportsman,” Pabst said. “He loved the sport as much, if not more, than we did. He contributed so much, in both professional and vintage racing.”

“I got to know Bob Akin when I drove with him a couple times in 1979 and 1980,” Rahal said. “Unfortunately, we lost Bob in an accident in 2002. He represented so many good things and epitomized a true gentleman in the sport."

Urciuoli added, "Bob was a great fellow competitor who was tragically killed at the age of 66. He had a great 40-year road-racing career and gave generously back to our sport, to his family, his community and his business.

“Bob Akin and I had a lot of fun together in vintage racing in the '90s,” Pabst said. “He had a very fast little Cooper, and in the beginning the Scarab that I drove and the Cooper were very similar on lap times, and each year the Cooper got a little faster.”

Pabst will be inducted into the Motorsports Hall of Fame of America later this year.