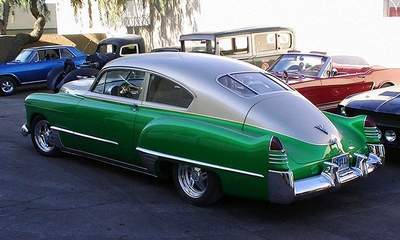 A customized 1948 Cadillac from customizer Drew's Garage in Tempe, Ariz., is on display at the Barrett-Jackson auction in Scottsdale, Ariz.

The weather might have played a part, as for the first time in quite a few years, temps have been in the Chamber of Commerce-like low 70s during the days with cool nights.

Perhaps the real reason is a renewed confidence in the economy. These just might be the most optimistic crowds in years as well, as informal interviews with both bidders and sellers have revealed an urge to do business that has been absent in the past few years.

Tuesday's attendance at Barrett-Jackson was up 53 percent from 2010 as well. Numbers for Wednesday's sale have yet to be announced, but if a parking-lot scan is any indicator, things are continuing to be rosy.

Russo and Steele starts its sale on Thursday, and a new tent structure and abandonment of the company's "all reserve" format looks to make a difference. Storms last year caused a tent at the Russo and Steele auction to collapse, forcing the auction to halt for two days. Dozens of cars were damaged; some were total losses. Russo and Steele is more than ready to press the reset button and to get a fresh start in 2011.

The auction action starts in Phoenix for RM Auctions at the Biltmore Resort and Spa on Thursday with an all-English "The British Are Here" sale, followed by a full day of sales on Friday. Gooding & Co. will start its sale in Scottsdale on Friday morning with a second full day on Saturday.

Comment by Mike Moore on January 23, 2011 at 6:25am
I don't know if it was just me but it seemed the prices were a little soft this year at Barrett-Jackson.