Shadow Memorial Museum - click below to read the PDF file and learn how you can become a part of history - Help build the Shadow Race Car Museum
Shadow Car Collection 28 Oct10.pdf 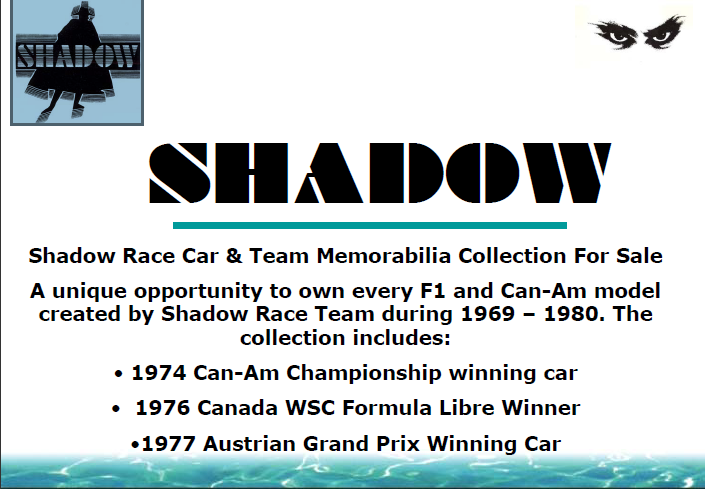 Shadow Racing Cars was a Formula One and sports car racing team, founded and initially based in the United States although later Formula One operations were run from Britain. 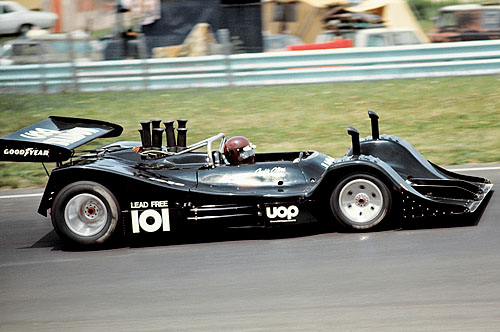 The company was founded by Don Nichols in 1971 as Advance Vehicle Systems; the cars were called Shadows, designed by Trevor Harris and entered under the Shadow Racing Inc. banner. The first Shadow, the Mk.I, was entered in the CanAm series with George Follmer and Vic Elford driving them. The Mk.1 featured an innovative design, using very small wheels for low drag and although the car was quick, it was not the most reliable car in the field

The team became more competitive the following year, replacing the Harris car with a Peter Bryant design owing some elements to his Ti22 'titanium car' with Jackie Oliver also arriving from this effort and finishing eighth in the CanAm championship. The team also found some financial backing in Universal Oil Products (UOP).

Shadow came to dominate the shortened 1974 series, although by this point they were competing largely against privateers, the works McLaren and Porsche efforts having left the series. 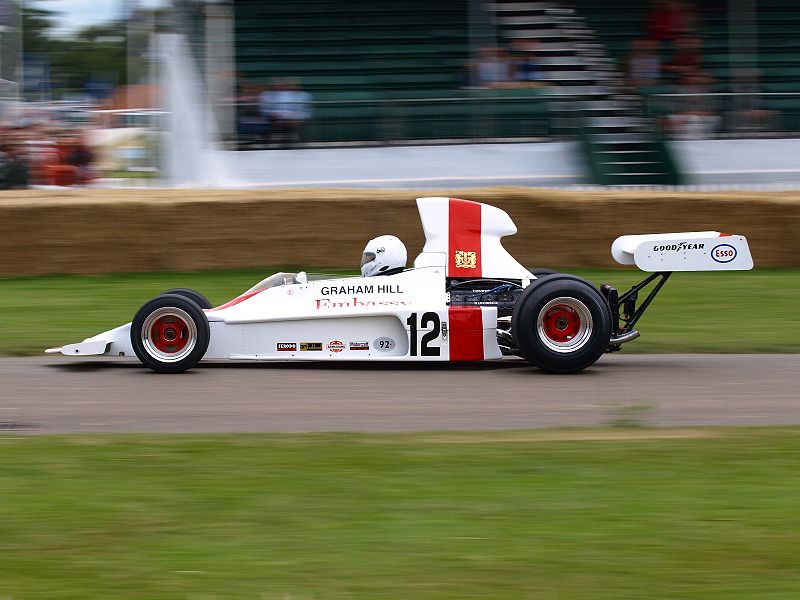 Towards the end of 1972, Nichols announced that he was entering his team into Formula One with UOP sponsored cars designed by Tony Southgate, who had designed the BRM that gave Jean-Pierre Beltoise victory at the Monaco Grand Prix the previous year.

The team debuted in Formula One at the 1973 South African Grand Prix with the DN1 chassis. Two cars were available for drivers Jackie Oliver and George Follmer, as well as a private entry for Graham Hill who ran his car under the Embassy Hill banner.

For 1974, the team hired two of the most promising drivers of the time: American Peter Revson and Frenchman Jean-Pierre Jarier. During a practice run for the South African Grand Prix Revson was killed by a suspension failure on his DN3. He was replaced by Tom Pryce. The new DN5 made the pole driven by Jean-Pierre Jarier in the two first Grand Prix the 1975 season but had mechanical failure in both races. The DN5 and most other Shadow Formula One cars used Ford Cosworth DFV engines, which produced around 490 bhp. However, later in 1975,another car was driven by Jarier, the DN7, and it was fitted with a Matra V-12 engine producing around 550 bhp. As one can imagine, the wheelbase was substantially lengthened to accommodate the much larger and more expensive French powerplant, although due to budgetary issues, the Matra-powered DN7 was doomed as a one-off. Jarier's new teammate, Tom Pryce, showed his talent by winning the non-championship Race of Champions that same year. Pryce however, died in a freak accident at the 1977 South African Grand Prix.

The team replaced Pryce with Alan Jones, who won the team's only Grand Prix at the Austrian Grand Prix the same year.

Following the departure of Jones to Williams and a majority of their staff leaving to form their own team, Arrows, the Shadow team started to decline sharply and in 1980 they were absorbed by Theodore Racing, but lack of money meant the team was broken up by mid-season.

You need to be a member of Shadow Race Cars Group to add comments!

Stephen saw your email about the Shadow book I have a large collection of digital pictures from all Shadows some I have bought the negs of and prints some I have taken over the years you be welcome to use any that are not copyrighted as I did pull many from the web. I am also in the printing industry and know what resolution is needed for print.

Comment by Dr Paul E Firmin on June 1, 2011 at 5:16pm
Dear Stephen Page,
Thank you for your encouragement. I am very interested in the history of the Shadow F1 and CanAm/F5000 teams and think that there is an interesting and intriguing story to be told about this innovative and enigmatic racing team. I'll check out the kindred spirit link, because I believe that Mr Springett was involved in an independent Shadow team who ran British driver Mike Wilds in the mid '70's and I want to include all aspects and details of Shadow cars. The VRL is already proving to be a great website as a potential source of contacts, photo's and information for my research into the Shadow marque. Thanks for your help so far.
Kind Regards,
Paul F.

The Group here is very switched on to Shadow's history.

You will find a kindred spirit in fellow UK member - http://www.thevrl.com/profile/RogerSpringett

I know Don Nichols and think you're on to a great project !!!!
All the best

Comment by Dr Paul E Firmin on June 1, 2011 at 2:22am
I'm looking for as much information about the SHADOW team, drivers and cars as possible, for a potential new book. Can anyone help provide info., stories and details?

Comment by Mike Buckley on March 10, 2010 at 5:35pm
To owners of Shadow cars congrats they are special and have been one of my favorites from way back in 1970 at Riverside my first race. Since the age of computers and the net has come along I have collected hundreds of pictures of various Shadow cars, logos, drivers, and misc. of everything Shadow. Since i'm also in graphic design i've been able to scan or recreate many of the logos in high resolution and used various graphics to make a few posters 20 x 24 size. Anyway Don asked me to make him a disc with everything I have and i've made one of the pictures and items and have sent one to Dennis Losher and can offer one to you as well. I'm making Don a copy along with another disc of pictures i've taken myself over the year being an on track photographer. If your interested in the first disc please contact me m7buck@att.net. The disk is sorted by car in F1 and for can am it's MKII & III then DN2 & 4 it includes the 4B Dodge small block used in the Can Am 2 series and then the DN6 Can Am then F5000 both years, F1 includes the Theodores as well. This sorting took me many hours to weed out dupes and to sort and put together.
Thanks Buck