Maserati is an Italian manufacturer of racing cars and sports cars, established on December 1, 1914, in Bologna. 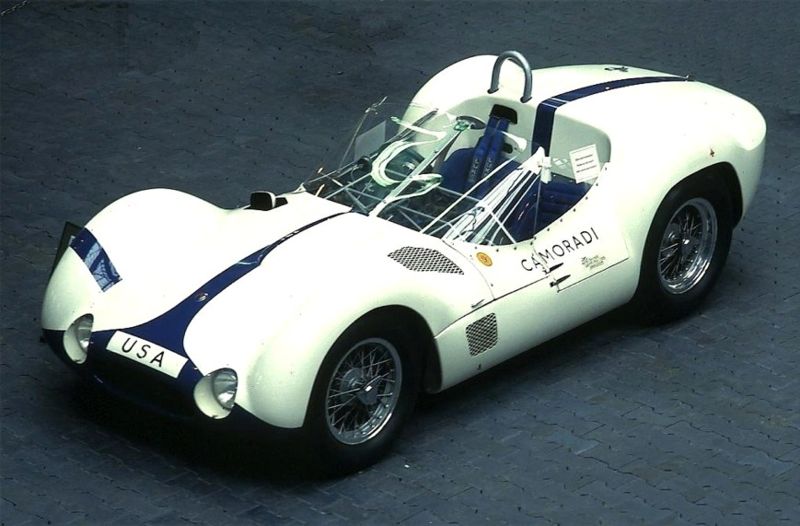 Maserati "Birdcage"
Maserati is an Italian manufacturer of racing cars and sports cars, established on December 1, 1914, in Bologna. The company's headquarters are now in Modena, and its emblem is a trident. It is a luxury car manufacturer competing directly with Aston Martin and Jaguar, and sometimes with large German mass-producers, including Audi, Mercedes-Benz and BMW. It has been owned by the Italian car giant Fiat S.p.A. since 1993. Inside the Fiat Group, Maserati has been initially associated with Ferrari S.p.A., but more recently it has become part of the sports car group including Alfa Romeo.

History
The Maserati brothers, Alfieri Maserati, Bindo Maserati, Carlo Maserati, Ettore Maserati, Ernesto Maserati and Mario Maserati, were all involved with automobiles from the beginning of the 20th century. Alfieri, Bindo and Ernesto built 2-litre Grand Prix cars for Diatto. In 1926, Diatto suspended the production of race cars, leading to the creation of the first Maserati and the founding of the Maserati marque. One of the first Maseratis, driven by Alfieri, won the 1926 Targa Florio. Maserati began making race cars with 4, 6, 8 and 16 cylinders (actually two straight eights mounted parallel to one another). Mario, an artist, is believed to have devised the company's trident emblem, based on one the Fontana del Nettuno, Bologna. Alfieri Maserati died in 1932 but three other brothers, Bindo, Ernesto and Ettore, kept the firm going, building cars that won races.

Orsi ownership
In 1937, the remaining Maserati brothers sold their shares in the company to the Adolfo Orsi family, who in 1940 relocated the company headquarters to their hometown of Modena,[2] where it remains to this day. The brothers continued in engineering roles with the company. Racing successes continued, even against the giants of German racing, Auto Union and Mercedes. In 1939, a Maserati 8CTF won the Indianapolis 500, a feat repeated the following year.

The war then intervened, Maserati abandoning cars to produce components for the Italian war effort. During this time, Maserati worked in fierce competition to construct a V16 towncar for Benito Mussolini before Ferry Porsche of Volkswagen built one for Adolf Hitler. This failed, and the plans were scrapped. Once peace was restored, Maserati returned to making cars; the Maserati A6 series did well in the post-war racing scene.

Key people joined the Maserati team. Alberto Massimino, an old Fiat engineer, with both Alfa Romeo and Ferrari experiences oversaw the design of all racing models for the next ten years. With him joined engineers Giulio Alfieri, Vittorio Bellentani, and Gioacchino Colombo. The focus was on the best engines and chassis to succeed in car racing. These new projects saw the last contributions of the Maserati brothers, who after their 10-year contract with Orsi expired went on to form O.S.C.A.. This new team at Maserati worked on several projects: the 4CLT, the A6 series, the 8CLT, and, pivotally for the future success of the company, the A6GCM.

The famous Argentinian driver Juan-Manuel Fangio raced for Maserati for a number of years in the 1950s, producing a number of stunning victories including winning the world championship in 1957 in the Maserati 250F alongside Toulo de Graffenried, Louis Chiron, Prince Bira, Enrico Platé, and a few others. Other racing projects in the 1950s were the 200S, 300S (with several famous pilots, among them Benoit Musy), 350S, and 450S, followed in 1961 by the famous Tipo 61.

Maserati had retired from factory racing participation due to the Guidizzolo accident in 1957, though they continued to build cars for privateers. After 1957, Maserati became more and more focussed on road cars, and chief engineer Giulio Alfieri built the 6-cylinder 3500 2+2 coupé, which featured an aluminum body over Carrozzeria Touring's superleggera structure, a design also used for the small-volume V8-powered 5000. Next came the Vignale-bodied Sebring, launched in 1962, the Mistrall Coupé in 1963 and Spider in 1964, both designed by Pietro Frua, and also in 1963, the company's first four-door, the Quattroporte, designed by Frua as well. The two-seat Ghibli coupé was launched in 1967, followed by a convertible in 1969.

Citroën ownership
A 1957 Maserati 200SI at the Scarsdale Concours 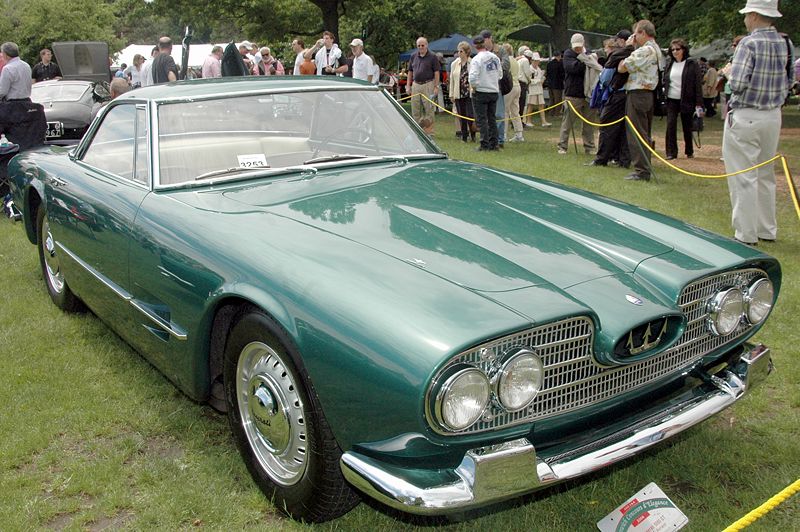 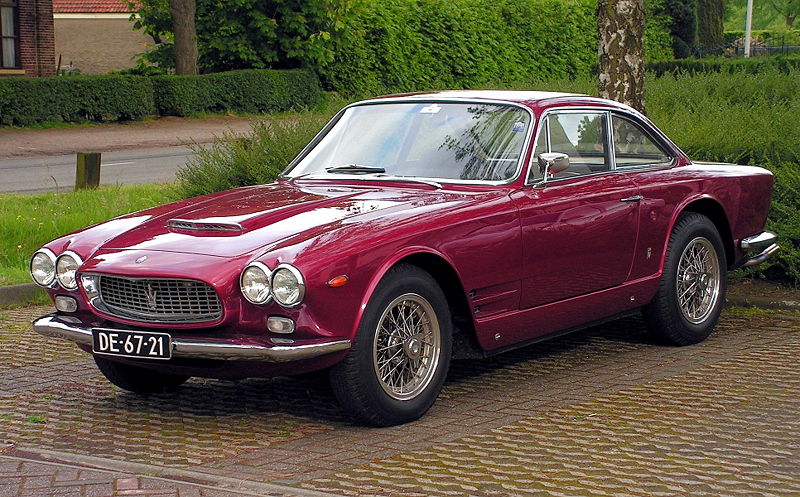 Maserati Sebring
Maserati Quattroporte grilleIn 1968, came a great change—purchase by Citroën. Adolfo Orsi remained the nominal president, but Maserati changed a great deal. New models were launched, and built in much greater numbers than before. Citroën borrowed Maserati expertise and engines for the Citroën SM and other vehicles, and Maseratis also incorporated Citroën technology, particularly in hydraulics.

New models included the Maserati Bora, the first mass-produced mid-engined Maserati, in 1971, and the Maserati Merak and Maserati Khamsin soon afterwards; the Maserati Quattroporte II, which shared some parts with Citroën SM, never came into production. The 1973 oil crisis, however, put the brakes on this ambitious expansion—suddenly, the demand for fuel-thirsty sports cars shrank. Citroën went bankrupt in 1974 and on May 23, 1975, the new controlling group PSA Peugeot Citroën declared that Maserati also was in liquidation.[3] Propped up by Italian government funds (GEPI), the company stayed alive, if barely.

The Maserati engine and its associated gearbox have been used in other vehicles such as Special Rally prepared Citroën DS, as used by Bob Neyret in Bandama Rally or in the Ligier JS 2. 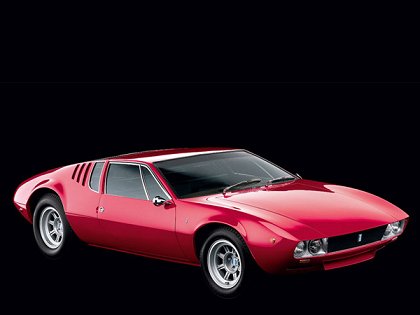 1975 saw the company back on its feet with Alessandro de Tomaso,[3] an Argentinian former racing driver, the new managing director. De Tomaso had arranged for the Benelli motorcycle company, which he controlled, to buy Maserati from Citroën and install him as its head. New models were introduced in 1976, including the Maserati Kyalami and the Maserati Quattroporte III.

The 1980s saw the company largely abandoning the mid-engined sports car in favour of squarish, front-engined, rear-drive coupes, cheaper than before but with aggressive performance, like the Maserati Biturbo.The Maserati Biturbo has been declined in a large number of models, all sharing key components among which a short two door coupe Maserati Karif and a cabriolet, the Spyder, designed by Zagato. The last version of the Maserati Biturbo was called Maserati Racing. It has been a transitional model in which several features to be found on the Ghibli II and the Shamal were tested. Two new coupes, the Maserati Shamal and Maserati Ghibli II, were released in 1990 and 1992, respectively.

The company also worked loosely with Chrysler, now headed by de Tomaso's friend Lee Iacocca. Chrysler purchased part of Maserati and the two jointly produced a car, the Chrysler TC by Maserati that took much too long to introduce on the US market.

Fiat ownership
1993 saw the company acquired by Fiat.[3] Substantial investments were made in Maserati, and it has since undergone something of a renaissance.

In 1999, a new chapter began in Maserati's history when the company launched the 3200 GT, the only "Fiat Maserati". This two-door coupé is powered by a 3.2 L twin-turbocharged V8 which produces 370 hp (276 kW); the car does 0–60 mph in less than 5 seconds. Its top speed is 285 km/h (177 mph). With the addition of a Ferrari-designed and -built V-8 and automated manual transmission for the 2002 model year, this car continues to be produced today as the Coupé (hardtop) and Spyder (convertible model).

Ferrari
In 1997, Fiat sold a 50% share in the company to Maserati's long-time arch-rival Ferrari (though this was, and is, itself controlled by Fiat). In 1999 Ferrari took full control, making Maserati its luxury division. A new factory was built, replacing the existing 1940s-vintage facility. Ferrari is credited for bringing Maserati back into business, after many lackluster years of Maserati teetering on the brink of bankruptcy.

More recently, Maserati discussed an agreement with Volkswagen for the German company to share its Audi division's Quattro all-wheel-drive technology (originally meant for the still-born Maserati Kubang sport utility vehicle concept) for Maserati's current Quattroporte platform. This idea has since been abandoned because Volkswagen owns two of Ferrari's direct rivals, Lamborghini and Bugatti.

Meanwhile two new models have been shown to the public: the MC12 road supersports and successful GT racer with an Enzo Ferrari–derived chassis and engine. And the Quattroporte, a high luxury saloon with the 4.2l V8 engine. Maserati is nowadays back in the business, very successfully selling on a global basis. In 2001 Ferrari decided to throw away all the old instruments and installed high-tech devices in the Modena factory, making it one of the most advanced in the world.

Today
In 2005, as a consequence of the termination of the agreement between Fiat and General Motors under which GM may have been obliged to buy Fiat's car division, Maserati was separated from Ferrari and brought back under Fiat's full control. Fiat plans to create a sports and luxury division from Maserati and another of its marques, Alfa Romeo. GM had to pay Fiat around two billion dollars. Maserati sold 2,006 cars in the United States in 2005, 2,108 in 2006, and 2,540 in 2007. In the second quarter of 2007 Maserati made profit for the first time in the 17 years under the Fiat Group ownership. 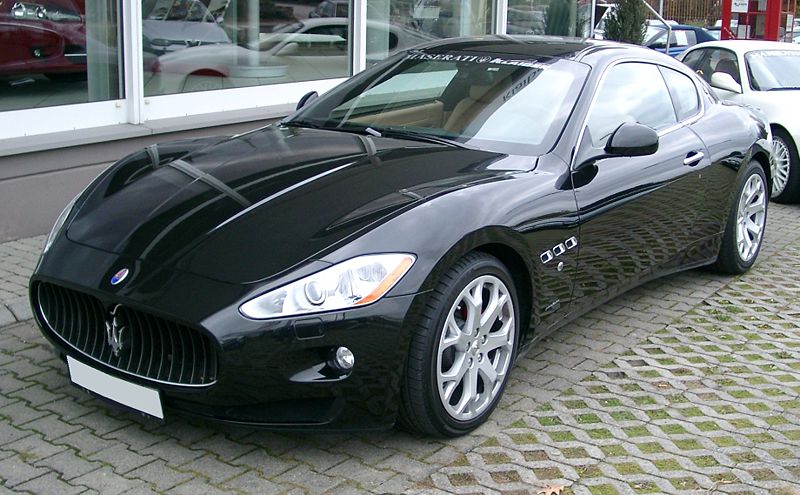 GranTurismo is the new four seat coupé.
Since early 2002 Maseratis are once again being sold in the United States market, which has quickly become for Maserati the largest market worldwide. The company has also re-entered the racing arena with their Trofeo and, in December 2003, the Maserati MC12 (formerly known as the MCC), which took part in select GT races in 2004. The MC12 is based on the Enzo Ferrari supercar; 50 street-legal homologation models (roadsters and coupes) have been sold for about US$700,000 each.

You need to be a member of Maserati Owners Group to add comments!

Comment by Cindy Meitle on July 20, 2009 at 2:43am
We hope you will join us at La Dolce Vita Automobili at Black Horse on Friday, August 14 of Monterey Car Week as we present wonderful Italian cars plus more on the European fairway. Come celebrate Maserati Days and stay for the tailgate party. Enjoy specialty displays such as the Automotive Design Pavilion, Alfa Romeo Through the Ages, a Silent Auction and much, much more.We have dozens of wonderful Maseratis on board and hope to see you there! www.ladolcevitamontereybay.com 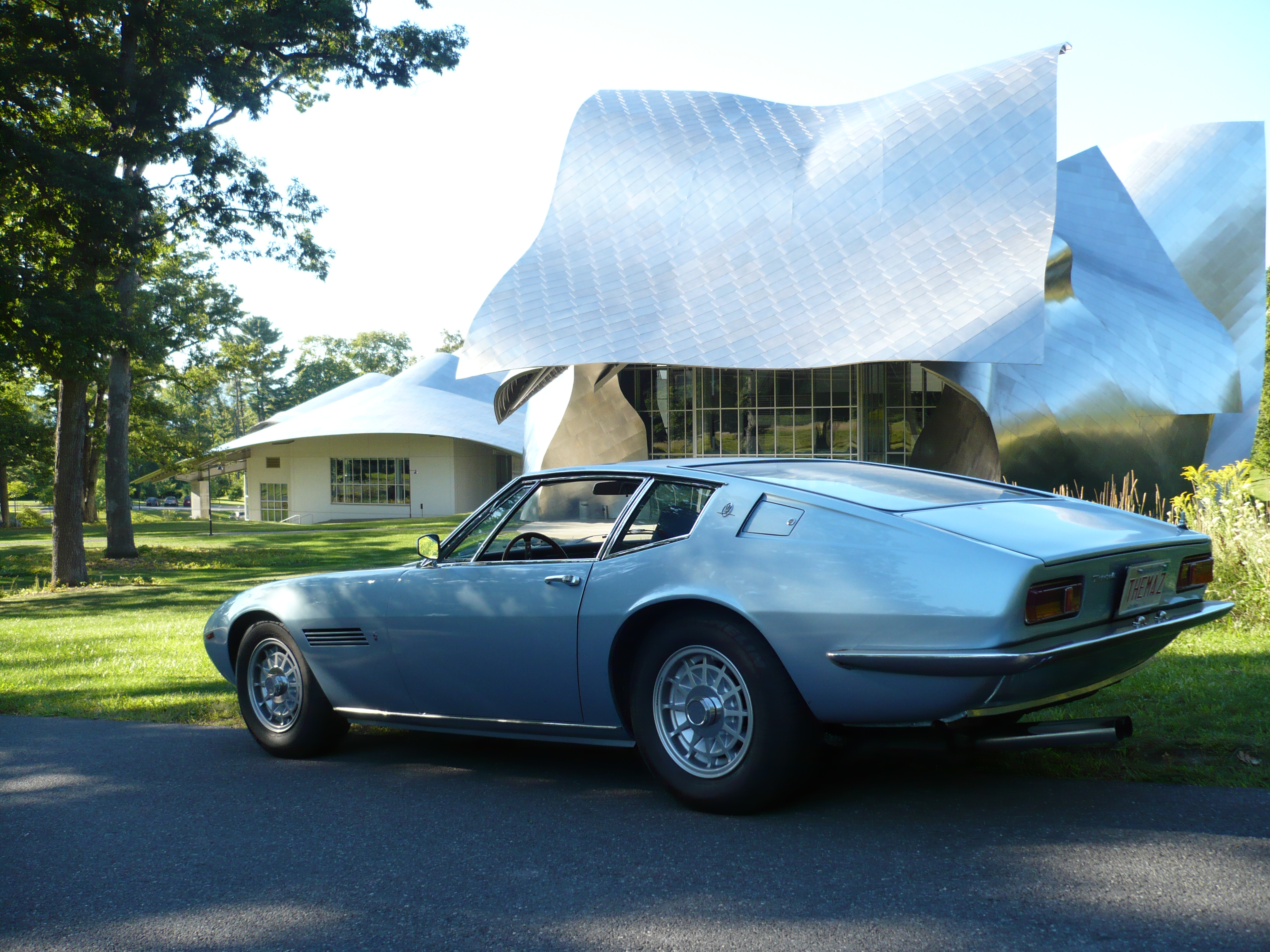