I posted on another forum about the history of the Viking Formula Ford and got some skeptical messages about the designers.  I was involved with the original designers, John Taylor and Arnie Loyning long before that car was conceived.  We were a group of racers in Tacoma Washington back in the 60's. Taylor and Loyning were old high school friends who started out doing solo events along with Marty Loft before they all went SCCA racing in production cars.  Loyning, Taylor and Loft later formed a team with Loft and Loyning sharing a Lotus Elan and Taylor driving a Lotus 23.  Loyning moved to Portland, Oregon and got involved with Pierre Phillips, while Loft partnered with Ted Slatten to dominate the Formula Ford series.  Taylor sold his Lotus and began working on a Formula Ford design of his own, while Loyning was also working on a design as well.  About 1975, Taylor was campaigning the ex-Loft Titan Mk6 and Loyning was driving a Lola 340 for Pierre Phillips.  The 2 old friends discussed their ideas about racing and Formula Fords and decided to form a company called Viking Racing.  They had a couple of rental Formula Fords, did preparation work for other drivers including the ADF's of Dale Elmer and Tom Weichman. They also had an engine dyno for Arnie's motor work, all housed in an old barn south of Gresham, Or.  It was there that they began the construction of the Viking Formula Ford.  Up in Tacoma, I had helped Taylor on his prototype design by cutting and fitting tubing for the chassis.  His design had a number of unique ideas, including a radiator mounted behind the seat  drawing air from below the car.  It also incorporated a fully welded chassis with a front loop over the steering wheel and all around the engine bay for stiffness.  Taylor also had designed his car with a high nose similar to today's F-1 cars to let the air flow under the seat to the radiator intake.    The final Viking design was a combination of Loyning's and Taylor's ideas merged.  I visited their shop a few times during race weekends, but still lived in Tacoma, so I lost touch after a while.  From what I heard from other guys we knew, there was some conflict, mostly between the wives about the business, and before the Viking was completed the partners split up.  Loyning, along with another guy finished the Viking and it went on to win a National championship and he stayed in Portland to build his engine business.  Taylor went on to be one of the first guys to be involved in the China trade after they opened up in 1979 and designed a bulldozer as well as the now ubiquitous 3 in 1 lathe-mill- drill machine.  After Taylor left Viking and went into the China business, he did not have any involvement with racing for 25 years, and his contributions to the Viking were largely ignored ( and sometimes denied) by those involved.  Taylor later returned to racing in 2001, winning a championship in the tough Legends cars racing against Kyle Bush in Las Vegas. He continues to race at the 3/8 mile short track known as the Bullring in the  NASCAR Super Late Model division.  Loyning went on to win a championship in the C sports racing SCCA division and now races in historic events with a replica of his old Lotus Elan.  Taylor is currently building a replica of his old Healey 100-6 with which he won an SCCA  E-production championship back in 1968. 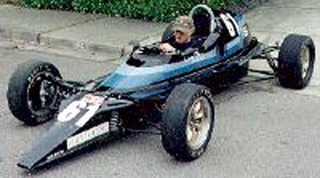