Vic Elford, considered one of the fastest race-car drivers of the Sixties and Seventies, was honored by the Road Racing Drivers Club with the 2015 Phil Hill Award. 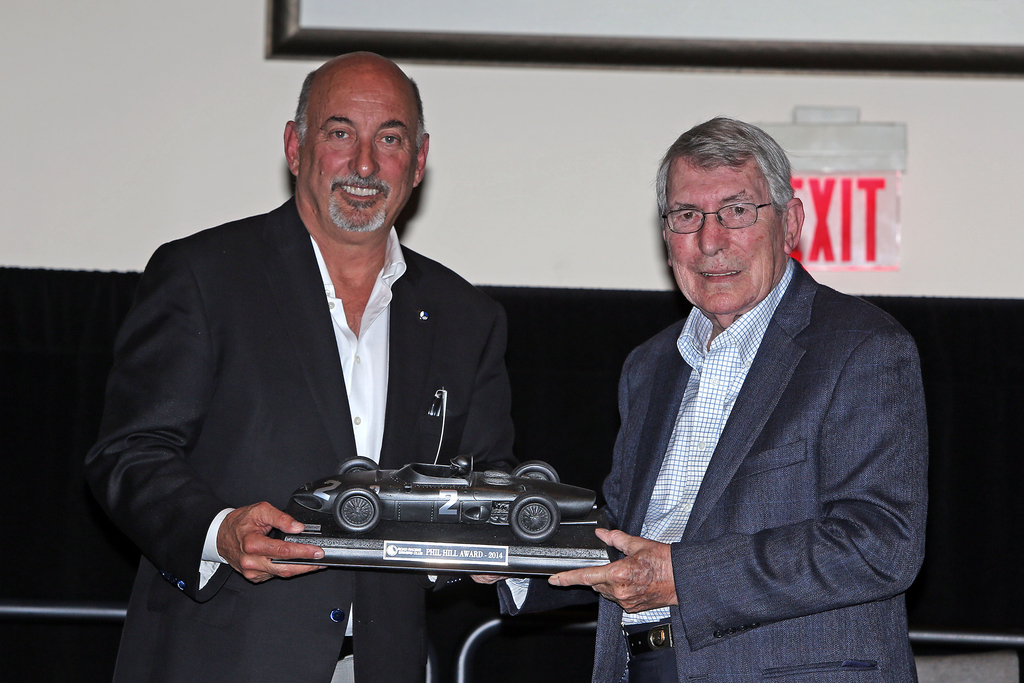 DAYTONA BEACH, Fla. (Jan. 22, 2015) - Vic Elford, considered one of the fastest race-car drivers of the Sixties and Seventies, was honored by the Road Racing Drivers Club with the 2015 Phil Hill Award. RRDC president Bobby Rahal made the presentation at a dinner prior to the running of the Rolex 24 At Daytona, the season opener of the 2015 TUDOR United SportsCar Championship.

The Phil Hill Award has been presented annually since 1993 to the person who the RRDC feels has rendered outstanding service to road racing. The recipient may be a driver, entrant or outstanding member of a sanctioning body.

It is named in honor of America’s first Formula 1 World Champion (in 1961), and is not only a tribute to his masterful accomplishments on the race track, it also recognizes his contributions as a great ambassador for the sport. Hill passed away in 2008.

Born in London and now a Florida resident, Elford was nicknamed "Quick Vic" by his peers, and is highly regarded for his versatility as a driver. He is one of only four drivers to record six major victories at the Classic Nurburgring (the others were Rudolf Caracciolo, John Surtees and Stirling Moss).

He also excelled in international rallies and was the last British driver to win the Monte Carlo rally (1968) and the European Rally Championship (1967). His 1968 season also included a win at the Daytona 24 Hours, a second at the Sebring 12 Hours, and victories at the Targa Florio and the Nurburgring 1000.

His first drive in Formula 1 resulted in a fourth-place finish at the French GP driving the slowest car in the field. Elford also competed with outstanding results in Can-Am, Trans-Am, off-road events in Africa, and even NASCAR.

Well known as a "Porsche hero," he was the only driver to race every version of the Porsche 917 in his five years with Porsche. His career included being hired by Steve McQueen to drive the 917 at high speed for the movie, "Le Mans," and narrating Michael Keyser's film, "The Speed Merchants."

He also raced for Ford, Triumph, Lancia, Alfa-Romeo, Ferrari, Chaparral, Shadow, Cooper, Lola, Chevron, Subaru, and drove a McLaren in Formula 1 and Can-Am, and a Chevrolet in Trans-Am.

Elford has garnered numerous lap records, and was the first driver to lap the LeMans circuit at over 150 mph in the Porsche long-tail 917 in 1970. He was a Formula 1 team manager, and, in the U.S., managed the Porsche Owners Driving School and the Porsche Driving Experience. He also authored three books: two versions of the "The Porsche High Performance Driving Handbook," and "Reflections on a Golden Era in Motorsport."

"Phil Hill represented everything that was great about the American spirit internationally," said Rahal. "He was the first U.S. Formula 1 champion and multi-time winner of Le Mans. He was a gentleman in the finest sense of the word. Vic Elford is indeed a worthy recipient of the Phil Hill Award.

"In the early Sixties, late Seventies, if you wanted to get it done, Vic Elford was the guy you called," said Rahal. "When nobody wanted anything to do with the Porsche 917 Vic was the guy who raised his hand and said, 'I'm there,' and nearly won the Le Mans 24-Hour in 1969 in that car.

"He was the Renaissance Man of racing because he started in rallying and he converted his success in rallying to great success in sports-car racing, and also scored points in Formula 1. He was one of those guys you may not have heard too much about, but if you studied the sport, you'd know this guy was a titan, and he is a titan."

After a spirited "interrogation" of Elford by Rahal on stage, Elford said he was humbled by receiving the award. "Phil HIll was a great friend, competitor, of course, and I'm speechless," he said. "I'm just honored and thrilled to have received this award in his name."

About the RRDC:
The Road Racing Drivers Club was formed in 1952 as a way to give champion drivers a say in their sport, particularly in the areas of safety, and has evolved to serve the future of road racing by mentoring new drivers on both amateur and professional levels. The Club’s membership includes leading industry professionals, race officials and motorsports journalists, in addition to prominent racing names.

In 2011, the RRDC launched a free on-line training seminar –  www.SAFEisFAST.com – featuring more than 30 RRDC members and other industry experts in high-quality videos covering subjects from physical and mental preparation to driving techniques, driver safety to car setup and sponsorship. The videos are updated regularly. Each week, a professional from the world of motor racing answers readers' questions on the site in a feature called “Ask a Pro."

The RRDC presents three annual awards: the Phil Hill Award, the Mark Donohue Award, and the Bob Akin Award, and supports the Team USA Scholarship, which has been assisting young Americans in the early stages of their careers since 1990.

Membership in the RRDC is by invitation only. Additional information on the organization may be found atwww.rrdc.org.