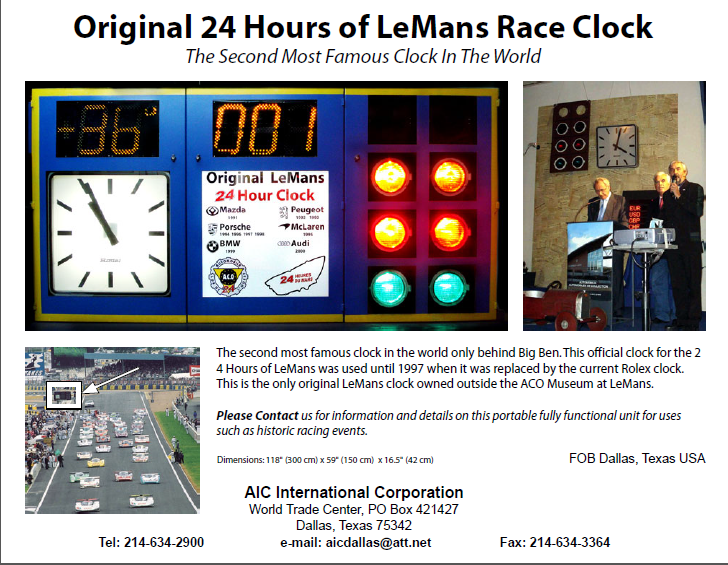 You are looking at what auction houses and appraisers have called the:

We purchased this Clock and Race Display from the ACO, organizers of the 24 hours of LeMans race, at the ACO Museum Archive Auction.

We have in a folder of 8 x 10 glossy photos of the Auction. The photos show the clock, lights along with the head of the ACO Museum, Director of the Curcuit of LeMans, and the Auctioneer, the Auction Catalog Pages, and the display housing in storage at LeMans

In the 100+ years of the 24 hours of LeMans this is the ONLY LeMans Clock (and race display) in Private Hands.

About the Clock & Displays

The Clock on its own, is an exceptional piece, which can be programmed for any of the 24 hour time zones, and is accurate to + or – .01 of a second.  The master clock can be equipped with an optional antenna for synchronization with the Atomic Clocks in France or Germany, or with a GPS antenna for synchronized anywhere it should be in the world.

If the power goes out, once the power is restored, the clock will fast forward itself to the current correct time.

This originally held the LED display for the race leader number; this LED display is still in use today in the current LeMans Clock & Display.

c) Install a digital clock = for use in Timed Events (ie: Track & Field or any timed event)

e) The one we like = Digital Timing Clock (day, date, time) and Flat Screen TV  = which allows not only for event timing, but also post race photo opportunities. Example: Marathon = after the race one could show the runner crossing the finish line on the Flat Screen along with there time for a post race family “Photo in a Photo” Opportunity (also a fund raising opportunity)

This clock & display are truly a global piece = works on 110v to 230v anywhere in the world.

Comes with a Custom Built, reusable HD export crate for shipping anywhere in the world

The most valuable collector cars in the world today ALL trace their pedigree and values to the 24 hours of LeMans.

Like the Olympics, World Cup Soccer, Super Bowl, NBA Finals, The Master Golf Tournament, Wimbledon, World Series in Baseball. . .  and like the hockey’s Stanley Cup Trophy, Borg Warner Trophy at Indy 500 . . . the 24 hours of LeMans Clock is an Iconic Symbol of Endurance & Performance at the highest level = Truly a Globally Recognized Iconic Symbol.  The Halo effect of LeMans

This clock & display was used from 1991 to 2000 and includes some of the greatest names:

Mazda 1991 (only Japanese car company to win = neither Honda nor Toyota have won?!)

- each of these winning cars are valued in excess of $1M+.

Events of all types:

Marathon = “sponsored by or brought to you by”

Race for the Cure = sponsorship or Fund Raiser

(take your and/or your family photo with Clock & Display)

This IS the Most Famous Clock in the World for:

AND it does not get any more Rare & Exclusive = it is the Only One In the World in Private Hands = truly a Global Iconic = Once in a Lifetime Opportunity.