The VW Story - What a Long Strange Trip

At the Berlin Auto Show in February 1939, Adolph Hitler delivered a speech decrying the increasing number of car accidents on the streets of Germany. For a man planning annihilation and world-wide domination, traffic safety would seem an odd preoccupation, but such was the Führer's enthrallment with all things automotive and his dedication to motorizing a German public poised at the starting line of the Thousand Year Reich.

That Hitler promoted or, rather, insisted on the development of a small, affordable, everyman's car—a volkswagen—is well-known. What's not clear is who exactly came up with the nuts and bolts of what would become the ingenious Volkswagen design. Two new books—"The Extraordinary Life of Josef Ganz" by Paul Schilperoord and "Thinking Small" by Andrea Hiott—are both diligently researched, but they differ in their conclusions about who deserves credit. Mr. Schilperoord's chronicle, whose subtitle is "The Jewish Engineer Behind Hitler's Volkswagen," is the more controversial and enlightening. 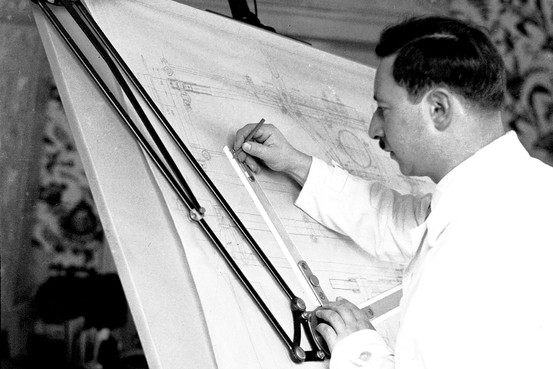 In 1934, Adolf Hitler drew a sketch for Ferdinand Porsche of a 'people's car,' which bore a striking resemblance to the Standard-Superior. 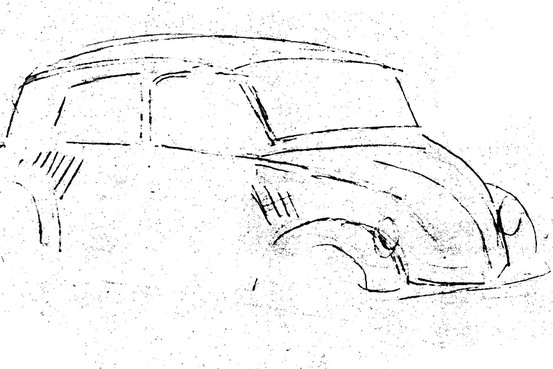 Josef Ganz was the kind of guy they don't seem to make much anymore. He was born in Budapest in 1898, the son of a German diplomat. When young Josef wasn't mastering the violin, he tinkered . . . and tinkered. He applied for his first patent, a streetcar safety system, at 9 years of age and invented an automatic aiming device for antiaircraft guns at age 17.

It wasn't until he was convalescing from a shrapnel wound during World War I that he truly got busy. He patented everything from board games to gearboxes and began taking particular interest in automobile design and construction. A few years and one serious motorcycle accident later, he became beguiled by designer Edmund Rumpler's Tropfenwagen, the bulbous, streamlined "car of the future" that was featured in "Metropolis" (1927), Fritz Lang's classic film.

In 1928, Ganz took a job as editor in chief of a small automotive magazine, Klein-Motor-Sport, determined to shake up an entrenched German auto industry wedded to building massive sedans. He promised to lobby for a reliable, reasonably priced smaller car. Mr. Schilperoord writes that Ganz "was an advocate of uncensored freedom and was disgusted by the way the majority of auto journalists practically ate out of the hands of established manufacturers, delivering fulsome praise for hopelessly outdated models." 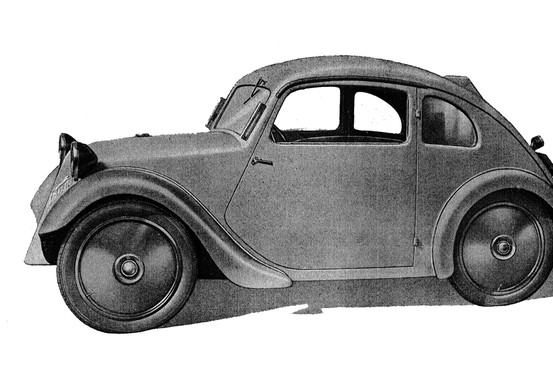 The Standard-Superior, a car produced the previous year by Josef Ganz.

To Ganz, the small car that would energize the industry needed to include daring technical advances: a straight steel-tube chassis, independent suspension and swing axles that ensured road grip, a rear-mounted, air-cooled engine, and a streamlined body. Ganz took on outside work as an engineering consultant with a number of auto builders hoping that they would advance his radical ideas—rules for magazine editors were lax in those days—but eventually determined that the only way to realize his vision was to build such a machine himself. The car that rolled out of his workshop was called the Maikafer, or May bug. 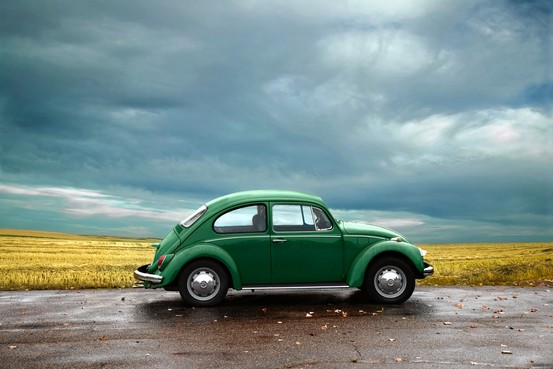 
Porsche would go on to design the famous 'Beetle'.

Ganz took the finished prototype on tour throughout Switzerland and Germany, where it was a tremendous hit. One of those who test-drove and admired the May bug was a gifted Austrian-born automotive engineer named Ferdinand Porsche. Though already a gifted designer, Porsche in 1931 had no "experience in designing lightweight models with rear-mounted engines and fully independent suspension," Mr. Schilperoord tells us. But after the test drive Porsche began developing drawings of his own small car, incorporating many of the technical features of Ganz's prototype. 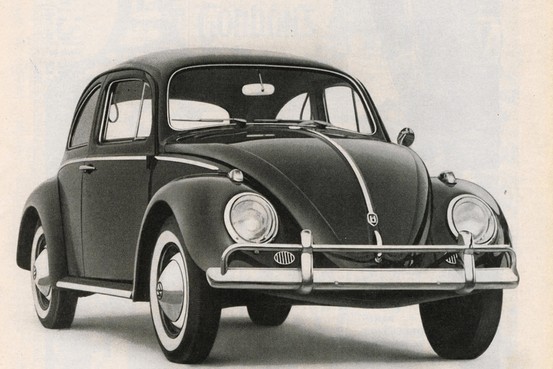 
First exported in the 1950s, its popularity took off in America with the famous advertisements by Doyle Dane Bernbach.

The May bug made no friends, however, among mainstream German car manufacturers; nor did Ganz, who continued to scold them in his magazine, now titled Motor-Kritik. Also taking notice of the rising May bug was the growing Nazi Party, which dismissed Ganz in the party newspaper as a lying "Jewish engineer."

The designer's next iteration of the small, affordable car, in 1933, was called the Standard-Superior, and in it one can clearly see the distinctive beetle shape emerging—the bug-eyed headlights, the small, flat windscreen and the rounded crown line running from the roof to the tail end. Like the May bug, it created a buzz.

But the buzz didn't bring the kind of results that Ganz had hoped for. Far from it. Over the next few years, with the Nazi Party would charge Ganz with attempting to blackmail Germany's dominant car companies by threatening to malign them in the pages of Motor-Kritik. The National Socialist government, Mr. Schilperoord notes, had an interest "in wiping from the collective memory the hugely positive influence of German Jews on science and learning." Poignantly if foolishly, Ganz steadfastly believed—even after an avalanche of falsified documents, trumped-up charges and character assassination descended on him—that justice would prevail and that his small car would triumph. After all, he reasoned, Hitler himself was behind the idea.

An updated version of the design is still produced today.

The Führer was calling for 4,000 miles of Autobahn to be built and was funding a German race-car program. Ganz remained certain that it was only a matter of time before he was asked to head up the development of a national people's car. "Hitler's determination to support his lifelong dreams," Mr. Mr. Schilperoord writes, "had perhaps blinded Ganz to the darker side of the Nazi people."

Hitler did indeed select an engineer for his project. Of the three men in Germany qualified for the task—Edmund Rumpler, Josef Ganz and Ferdinand Porsche—both Ganz and Rumpler were slashed from the list because they were Jewish. At a meeting with Porsche in 1934, Hitler roughed out notepad sketches of the sort of model he demanded. The drawings, on display in Mr. Schilperoord's book, show a car looking very much like the beetle-like Standard-Superior. Adding insult to Ganz's injury was the fact that, according to Mr. Schilperoord, Porsche didn't have much interest in building a small car—he preferred producing a cheap, normal-size car. What's more, many in the elite German auto industry didn't particularly care to work with the aloof and ill-tempered Porsche.

The Extraordinary Life of Josef Ganz

Ganz was eventually dismissed from his consulting contracts and fired as editor of Motor-Kritik. (The publication's owners graciously told him that he was welcome to free-lance as long as he did so without a byline.) In June 1934, he drove to Switzerland, where he soon realized, given the increasingly toxic nature of the regime, that it would be suicidal to return to Germany.

The last portion of Mr. Schilperoord's biography has the feel of a thriller as Ganz sweats out border crossings and checks hotel lobbies for Gestapo agents he knows are out to arrest him. The Nazis eventually seized his property, stole his patents, and charged him with the vague and bogus crime of "economic espionage." He survived the war, but ruined. Ganz lived to age 69, passing his final years in Australia with a female companion, broke and with little hope of rescuing his career. He wrote to a friend, "I am left, as it were, facing nothing."

Andrea Hiott's "Thinking Small: The Long Strange Trip of the Volkswagen Beetle" is as breezy in the telling of VW's story as Mr. Schilperoord's chronicle is sober. The author, an American writer living in Germany, takes the more conventional view that Ferdinand Porsche was the sole creator of the Volkswagen. Josef Ganz rates only a passing mention.

Ms. Hiott clearly admires Porsche's genius but not so blindly that it prevents her from wading briefly into a discussion of what Porsche knew, and how much he participated in, the use of forced labor during his manufacturing career. The question is left unresolved, but it is sufficient to say that while Ferdinand Porsche never joined the Nazi Party, he wasn't one to fight city hall. Presenting Hitler with a custom-built black Volkswagen cabriolet for his birthday in 1942 didn't hurt either.

Ms. Hiott devotes a good deal of her book to following the building of The Town of Strength Through Joy, a planned factory city where Hitler envisioned thousands of Aryans one day living and happily turning out Volkswagens—and more Aryans. Only one factory building was ever completed, and only a handful of Strength Through Joy Cars, as the Volkswagen was then called, were manufactured before the war effort demanded that the facility turn to the production of armaments.

After the war, the town, known today as Wolfsburg (in north-central Germany), returned to building Volkswagens in a factory so damaged by Allied bombing that assembly-line workers opened umbrellas when it rained. Sales of the car, under British supervision, began to take off, first in postwar Europe, then internationally, until control of the factory was returned to German hands.

In 1948, the Ford Motor Co. was courted as a corporate partner, but an adviser to Henry Ford II cautioned: "What we're being offered here isn't worth a damn." The author notes that this might seem today like a head-slapping miscalculation, but with the war still fresh in American minds, promoting a rear-engine, tin roller skate with a goose-stepping name like Volkswagen was a logical pass. By the early 1950s, however, VW felt ready to make a run at the U.S. market alone.

But how to capture American car buyers when Detroit's colossal road masters, and the upward mobility they projected, were all the rage? VW's advertising account landed with a tiny New York firm called Doyle Dane Bernbach, headed by a Jewish director named Bill Bernbach, who employed an office full of real-life Mad Men. DDB was quirky before quirky became commonplace in advertising, and the firm's signature strategy was to celebrate any product's greatest weakness. In VW's case, that meant size. Thus began a series of ads, beginning with "Think Small," that are now considered among the greatest ever conceived.

By the 1960s, 1970s and beyond, the VW had become the youth culture's main mode of transportation. Indestructible, easy to repair and cheap on gas, a VW Beetle meant freedom. Such was the car's universal appeal that if it were invented today it would likely be called the iBug. It has been known world-wide as the Flea, the Turtle, the Foxi, the Buba, the Poncho and the Mouse. By the time the last unit danced off the assembly line in Mexico in 2003, to the accompaniment of a mariachi band, 21.5 million of Hitler's volkswagens had been sent out into the world, the dream car of a man who never had a driver's license.

—Mr. Cooke, a frequent contributor to the weekend Journal, is a writer and critic in Pelham, N.Y.