When it came out, many automotive writers were falling over themselves trying to be the first to show pictures and write stories about Porsche's new Boxster. But I always like to look back to see where inspiration comes from so let me put things into historic perspective by taking a look at the 1950's Porsche Spyders that serve as its inspiration.  However, I'm not going to talk about Porsche's RSK or even their beloved Speedster.  Rather, I want to tell you about an earlier model with a heritage curiously similar in many ways to the Boxster prototype.

First, if I told you that there were headlines that shouted: "Porsche Unveils New Prototype at International Auto Show," would you believe that the show was the Paris Salon, not the Detroit International and the year was 1953, not 1993?  Well, in October of 1953 Porsche unveiled a silver, mid-engined, two seater prototype they called the Type 550 and it took the automotive world by storm much like the Boxster did 40 years later. 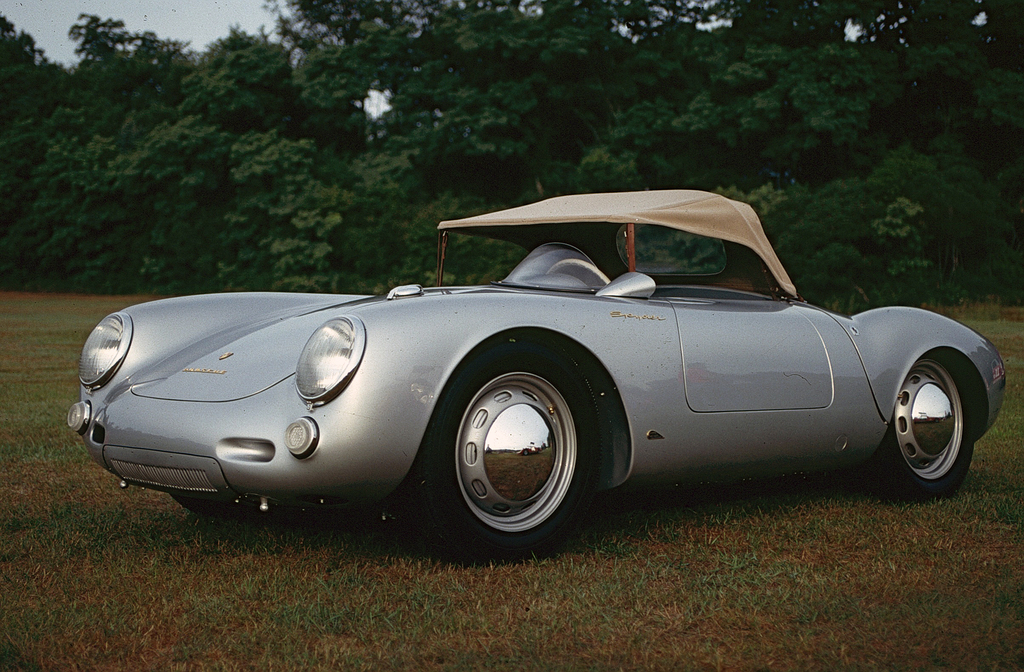 Like the Boxster, the Type 550 prototype was introduced well before Porsche had decided on a final shape for the body and it wasn't until a year after the Paris show that Porsche had a single production Type 550 to sell.  The similarities continue when you consider the reasons why each car was brought to market.  Today, Porsche is building the Boxster to prop up its entry-level sales.  It's seen as the car that will get people excited about Porsche again.  In 1953, the Type 550 was brought to market to satisfy its need for a true racing Porsche.  Back then Porsche realized that winning races helped sell cars.  So while their Type 356 cars were sporty and reliable, they were regarded as too heavy and too soft by Porsche engineers for the rigors of all-out racing.  The Type 550, and later the 550A, were designed to be light, powerful, space frame cars capable of winning on Sunday and bringing in customers on Monday.  So like today's Boxster, increased sales was Porsche's vision for their new Type 550.

The Type 550's roots began with the Glockler-Porsches - home-built specials that won many German races in 1950, '51 and '52.  Evolving from the Glockler's basic design of tube frame, light-weight body with mid-engine, the first two 550's were hand built in late 1952 and early 1953 by Porsche to compete in the Le Mans 24 hour race.  Constructed quickly and simply, these early cars featured a ladder frame made of welded steel tubes with a half dozen cross members.  Fitted over this chassis was a one-piece skin built of aluminum to which was fitted a trunk, doors and deck lid.  Powered by their 1500 Super pushrod motor, Porsche number 550-01 won its first race at an event called the Eifel Races which was held at the fabled Nurburgring.  Porsche 550-02 joined 550-01 at Le Mans and together they scored a 1-2 victory in the 1500 cc class, setting a track record in the bargain.  Porsche's marketing instincts about winning races to sell cars proved accurate because after Le Mans, both Type 550's were refurbished at the Factory and then sold to wealthy Central American businessmen for entry in the five-day Carrera Panamericana.  Here too the cars proved strong and fast, building on an already rapidly growing reputation for reliability. 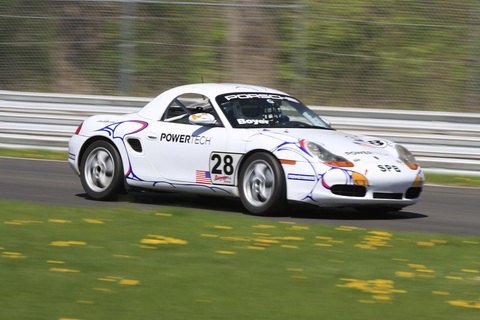 Encouraged by their early victories with the first two Type 550's, Porsche used the most logical recipe for continued success: more horsepower and lighter weight.  The additional power came from an Ernst Fuhrmann-designed motor called the Type 547. This is the famous (or infamous) roller bearing, 4 cam motor making 110 bhp at a lofty 7,800 rpm.  Porsche purists will note that the Type number, 547, precedes the Type 550 by 3 digits. This is because the design of the motor began before the design of the car.  Evolutionary changes to the Type 547 improved power over the years until, in the later forms, it was rated a respectable 135 bhp at 7,200 rpm.

The original design of the Type 550 chassis was simple (some say crude) and relatively heavy.  That's why over the winter of 1955-56, Porsche designed a new, stronger, lighter, and stiffer space frame chassis for their racing efforts.  Despite the similar looking exterior sheet metal, this was essentially a new and vastly improved race car.  It was given the designation of the 550A, although the changes to the basic structure were so significant, you could make a case for assigning a new "Type" number for it.

Weighing in at a scant 1170 lbs., the goal of improved power to weight ratio was reached with this new design.  To further improve the car for competition, larger drum brakes were fitted up front and a larger fuel tank (34.3 gallons) was added.  Testing showed a standing kilometer time of 26.6 seconds at a speed of 127.5 mph.  Top speed was a respectable 150 mph; amazing when you consider the small size of the motor and the simplicity of the aerodynamic testing employed in designing the body.

The first race for the 550A was the Nurburgring 1000 km event.  Happily, Porsche's mid-winter homework was rewarded with a 1-2 class win (fourth and sixth overall) and they were encouraged to attempt a try at the famous and difficult Targa Florio.  With Umberto Maglioli at the wheel of this nearly 450 mile race, victory was theirs as Porsche finished first overall, despite only running a 1500 cc motor against much more powerful competition.  And so the secret to Porsche's success was revealed: good design, superb preparation, faultless reliability and an aggressive and skillful driver. Unfortunately, Porsche have been playing around with that recipe these days, but that's for another story.

Dry stats and dusty history are interesting, but how did the drivers back then really feel about their Porsches?  Let me quote from Stirling Moss' wonderful book "My Cars, My Career" on his impressions of the Porsche 550A. 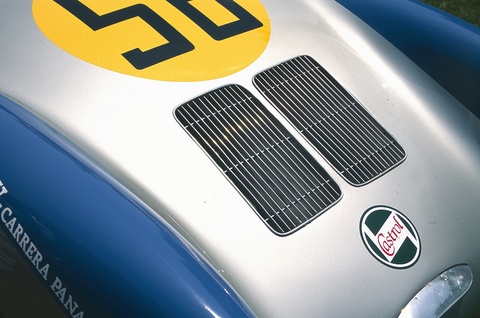 "Huschke von Hanstein offered us one of his works (550A) Porsches...  It proved just a joy to drive and we were able to go giant-killing amongst the works Ferraris which really were deeply satisfying.  What impressed me most was that rugged-sounding air-cooled engine behind my shoulders winding up to 7,400 rpm while at the same time feeling utterly unburstable. ... we still won our class by miles ... lapping only two seconds slower than Phil Hill's pole position time in the Ferrari Testa Rossa. It had been thoroughly enjoyable as we had forced the Ferraris to run harder than they had wanted, all day long."

So what did all of this mean to the Porsche nut who, back in the 1990’s stared pictures of the Boxster prototype?  To the optimist, it meant that the new car would be good right "out of the box" and that it would evolve into a classic (which it has!) Network Resources.  If you were a pessimist, I suggest you go back to reading Consumer's Reports and leave the dreaming about Porsches to the rest of us.