Seventy-five years after their first UK appearance, the Silver Arrows racers are to return in action on British soil at the 2012 Goodwood Revival

After much speculation and excitement, Goodwood is now able to confirm the sensational news that 75 years after the first appearance of the legendary pre-war ‘Silver Arrows’ in the UK, the 2012 Goodwood Revival (14-16 September) will stage arguably the most spectacular historic vehicle demonstration of all time.

The once-in-a-lifetime opportunity to see the famous Silver Arrows Mercedes-Benz and Auto Union Grand Prix cars once again being driven in anger at a British motor circuit for the first time in 75 years will make the 2012 Revival a must-attend event for all motor sport enthusiasts.

The iconic Mercedes-Benz W25, W125, W154 and W165, plus examples of the Auto Union Type C and Type D, will be in action at race-speeds in September, with well-known top-level racing drivers behind the wheels of these awesome and significant cars.   This promises to be the biggest thing in historic motor sport for decades. 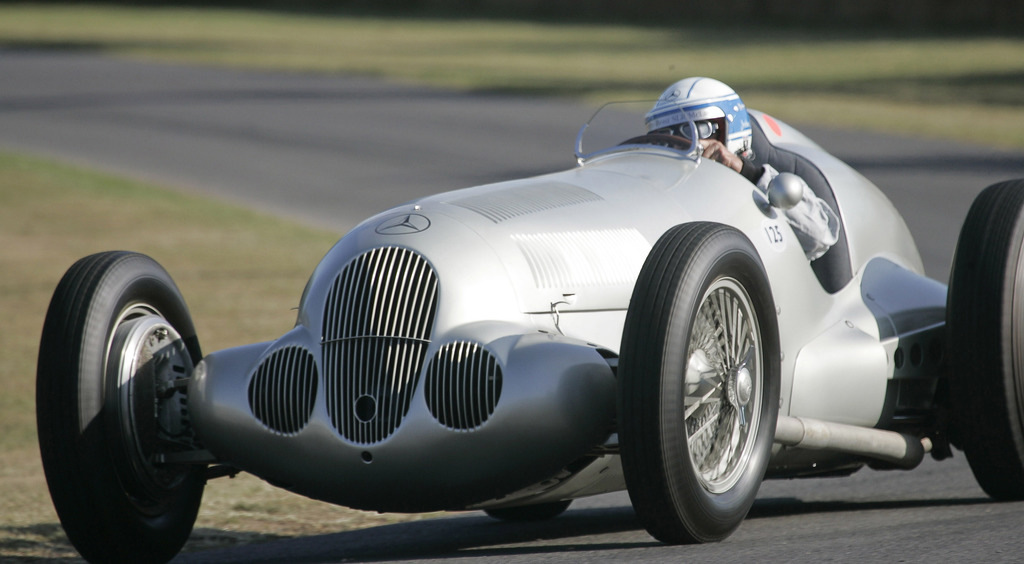 A Brief History of the Silver Arrows

The introduction of the 750kg formula in 1934, along with the promise of significant funding from the German government, led to the arrival on the Grand Prix scene of two of the most evocative names in motor sport history: Mercedes-Benz and Auto Union. Built with little regard for cost, their cars were light years ahead of the opposition, and dominated Grand Prix racing from 1934 until the outbreak of war in 1939.

Abandoning the traditional German racing white in favour of bare metal (legend has it that this was to save weight, in order to keep them below the 750kg maximum weight limit, although the truth of this story is still debated), the cars quickly gained the nickname of ‘Silberpfeil’ (Silver Arrows in German)’, creating a legend that endures to this day.

By 1937, when the cars raced in the UK for the first time, power outputs were approaching 600bhp – a level that would not be equalled in Grand Prix racing until the turbo era of the 1980s. Such was the speed and sound of these monstrous machines, and the astonishing feats of the daredevils who drove them, that the English crowd – more accustomed to seeing Rileys, MGs and ERAs with less than half the power of the German cars, competing in handicap races – were rendered utterly speechless.

With the full support of Mercedes-Benz and Audi, the 2012 Goodwood Revival will recreate the spirit of that momentous day in 1937, with a race-speed demonstration of as many as ten of these fabulous machines, including examples of the Mercedes-Benz W25, W125, W154 and W165, and Auto Union Type C and Type D.

Piloted by world famous drivers, the Silver Arrows will stage a carefully choreographed ‘race’, alongside examples of the British and Continental ‘cannon fodder’ that raced against them in period – providing all the spectacle of a real race, but without risk to these priceless machines.

Low-speed demonstrations by individual Silver Arrows are an impressive sight, and this will be the first time that so many of these mighty machines have been driven together at full racing speed since the Yugoslav Grand Prix, on 3 September 1939 – the day after WWII broke out. As such, it will be a truly once-in-a-lifetime experience – arguably the most momentous occasion in the history of historic motor sport.

To complete the spectacle, the cars will be housed in an authentic recreation of a period pit/paddock building, based on the distinctive structure at the Bremgarten circuit in Switzerland, alongside period transporters.

Switzerland had strong links with the Silver Arrows. The Swiss Grand Prix was a highlight of the European Championship from 1935-39, with the Bremgarten track was regarded as one of the most challenging in the world:

Additionally, the European Hillclimb Championship was very important during the 1930s, being won by such star drivers as Hans Stuck and Rudolf Carraciola. The Klausen Pass event was one of the most popular on the calendar, won in 1934 by Carraciola in a Mercedes-Benz W25, beating his rival Hans Stuck in an Auto Union.

More information about this one-off Goodwood Revival spectacle will be confirmed over the coming months.

Tickets and further information for the 2012 Goodwood Revival and Festival of Speed can be found on the Goodwood website (www.goodwood.com/motor sport/), or via the Ticket Hotline as follows:

On-line via the Ticket section of the website www.goodwood.com/motor sport/