Historic Grand Prix Group will race at USGP in Texas

Historic Grand Prix Group Will Race At USGP in Texas 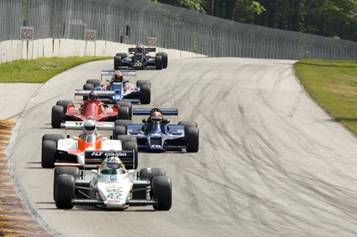 Austin, TX -- Formula 1 fans attending the U.S. Grand Prix at the debuting Circuit of the Americas here will have the opportunity to witness the dichotomy of mechanics working on current F1 machines with laptops, while at the same time watching Historic Grand Prix® caretakers with socket wrenches in their laps.

COTA has just announced that the HGP will be the first support series for the Nov. 16-18 race at the still-under-construction 3.4-mile road course.  HGP is comprised of 50 owner/drivers of authentic F1 sleds from the FIA's 3.0-liter formula which spanned 1966-83.

While the vintage open-wheelers will include familiar and contemporary F1 names such as McLaren, Ferrari, Williams and Lotus, the pack will also showcase nameplates which have since faded from the F1 scene, including Brabham, BRM, Tyrrell, March, Shadow, Penske, Hesketh, Wolf, Arrows, Ensign, Hill, Theodore and Vel's Parnelli.

HGP offers spectators the chance to see the vintage F1 cars up close and immerse themselves in the history of Formula One racing. Normally at vintage races the HGP paddock is together under one roof or canopy, with each car accompanied by a history board and accessible to the race fans.  It's unknown if that access will be offered under modern F1 ticketing, but the grid is sure to be full up as the historic drivers get their first look at the new track and enjoy the first F1 race in the U.S. since 2007, at Indianpolis Motor Speedway.

HGP driver Bud Moeller noted, "Having the rolling museum of Historic Grand Prix together with the modern F1 cars will thrill new and old fans alike.  F1 back in the United States again is what we've all been hoping for, and driving a new track is a great equalizer.  I'm really looking forward to it."

"Historic Grand Prix is a great compliment to the USGP as it allows our fans to see the technical and innovative progression of Formula 1 racing cars," said COTA exec v.p. Bruce Knox.  "Many of the HGP cars are legendary and include Mario Andretti's Lotus 79 that won the 1978 World Driving Championship, Niki Lauda's 1976 Ferrari 312-T2 that finished 2nd in 1976....and Gilles Villeneuve's 1980 Ferrari 312-T5.  Historic Grand Prix is a series that was widely requested by our customers and we are pleased that it will be included as a USGP support race."

Prior to the USGP in November, HGP will take to the track with back-to-back weekends at the Lime Rock Historic Festival Aug. 31-Sept. 3, and the SVRA Vintage GP at Watkins Glen Sept. 7-9.

For USGP tickets, visit www.cotausgp.com, or call Ticketmaster at 800-745-3000.  For information on HGP, visit www.historicgrandprix.com.

We are excited about the prospect of running Paul Rego's stunning Lotus 79, chassis #1 as support for the 2012 USGP in Austin.  We are prepping the car now and will also compete in the Lime Rock and Watkins Glen rounds.  Doc Bundy is doing the driving and they are all sure to be great events.  For more info on the car we will run go to metcalfracing.com.