I'm hoping to find photographs, of both the chassis without coachwork AND complete race-ready.

I have a "race-ready" '65-'66 Crusader but it has been morphed & butchered over its lifetime and I'd like to restore it to its original glory over the coming year.

Please contact me here & we can set-up direct communication after that.

Thanks, in advance, to anyone & everyone.

Okay... Grattan wasn't a stellar weekend, but it was a lot of fun (despite the blistering heat).

Road America, my all-time favorite track, on the other hand decided to bite REALLY hard at the "Kink".

It's going to be a loooong, busy winter...

Wow. It's been THAT long since I last posted ?  LOL

I really don't feel the need to elaborate on my 2014 season except to say it was short and, sometimes, fun.

Here we are in 2015 and I finally have a working GoPro camera !  Here's a VERY short video of our heat race at Grattan:

It's only 10 minutes long but I was having a blast.  Hope you all enjoy.

Getting ready for Road America.

Glenn, i can't find your email address anywhere on my cranky computer. I have an original Crusader Formula Vee cap i would like to send to you. Email me Richard Davis, richard@rhdavis.net

Drivers' school / first race at Gingerman Raceway in South Haven, Michigan was, overall, a success... as long you don't count the motor being 1000rpm shy of a normal FV redline. I heard the valves floating at 4800-5000. But this turned out to be a blessing as it forced me to really drive in a vane attempt to keep up. If I'd had all the motor I'm used to, I would've spent more time landscaping than actually racing. But it was still a ton-o-fun to be back on track. I have evaluated the weekend and I have declared it good.

Before the next race I learned that, with the exception of the pushrods & rockers, the motor was bone-stock... like right out of a Beetle. I was less than happy to learn this but wasn't going to let it end my season. I spent a weekend installing & adapting my Noble motor (the one that took me to an SCCA Regional championship in '98).

Fast forward a few more weeks... Fathers' Day weekend at Blackhawk Farms Raceway (South Beloit, Illinois). The Noble motor proved to be the same ol' beast it was 13-years ago... tons of bottom-end to pull my butt out of the slowest corners and enough top-end to pull away from guys on the straights. I do still have a little way to go in sweeping out the cobwebs (I was a good 10-seconds off the pace of the front runners) but I'm more familiar with this track and concluded that I like the way this car drives.

Unfortunately (to be quite understated) we lost a fellow competitor during our feature race in a horrific shunt that involved wheel-to-wheel contact followed by a violent set of cartwheels and rolls.

As a result, I decided that, before my final race of the year, I would add support to the upper chassis & roll hoop. But, as is always the case, too many "real-life" things got in the way and I ran out of reasonable time to complete what I wanted. And there was no way I was going to race again until I feel the driver's cocoon is safe enough for me.

Starting the overdue work on the chassis and already drooling in anticipation of 2014. I'll post periodically over the winter as I re-build both Vees (yes, I plan to run the current-era car in SCCA too !)

I received several photos from a fellow Crusader owner and, after close examination, I realized that mine only had a few modifications over the years... this is actually how these things were built in the 60's!!

I ended up only making some minor seat & pedal adjustments to fit my 6'3" carcass.

She's ready and I'll be going through VSCDA Drivers' School (and hopefully racing) at Gingerman Raceway in South Haven, Michigan next weekend (May 2-5, 2013).

If all goes well, I may have some in-car video to  upload at YouTube.

Here's a photo taken just before loading the trailer. 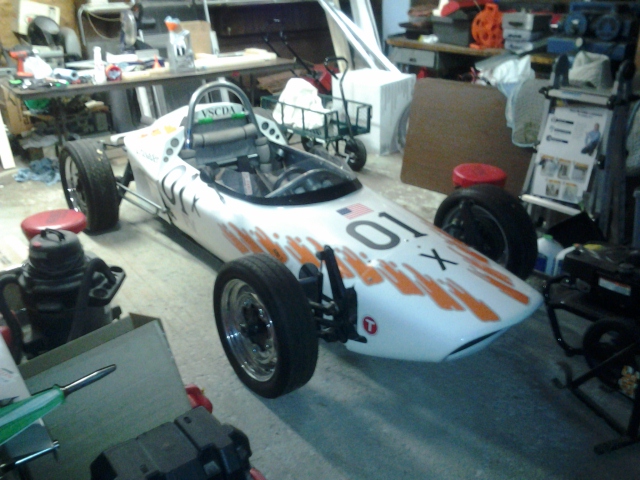