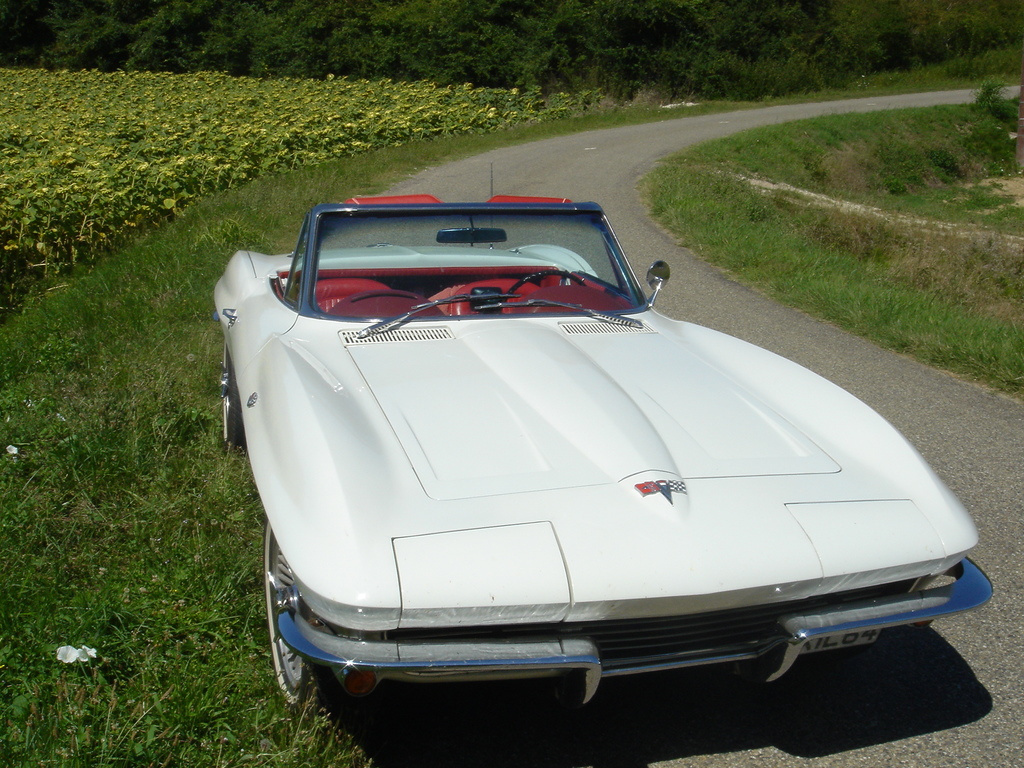 The Corvette is regarded as one of the world’s most popular 2 seater sports car with over 1.5 million built and sold since 1953. All corvettes are built with a fibre glass body which means they don’t suffer from rust, making them very durable. The V8 engine has been a standard fitting on all cars since 1955. The Corvette has been selected 11 time s as the pace car for the Indianapolis 500.

The first corvette was unveiled in 1953 at the GM Motorama, and it was originally intended to be a show concept car. Designed and built by Harley Earl and named after the highly manoeuvrable warship of the same name.

The concept car became the first generation of Corvette sports cars. The first generation corvette was built and sold between 1953- 62. Often referred to as a solid axle model because; independent rear suspension wasn’t introduced to the Corvette model until the 63 Sting ray. In 53 300 hand built Corvette were produced, it was originally inspired by European sports cars of the period. The Corvette was designed to compete and win at the race track. It was intended that the Corvette would have a short production run, until an engineer named Zora Arkus Duntov joined the company and persuaded GM to take performance and motorsports seriously. Zora was primarily responsible for introducing the V8 and manual transmission to the car and pushed the design toward racing.

The 1960’s saw a new generation of Corvette, production rose dramatically to 10,000 cars a year built and sold. It was during this period of the cars evolution that they received rear independent suspensions, which were several years ahead of other domestic models. The designers had in previous years tried without success to introduce fuel injection, but the new C2 models were technological and performance leaders of the day, and this time the fuel injection worked.

This period of Corvette models are considered the most expensive to restore, but are regarded as the models with the best investment.

At the end of the 60’s saw the most widely recognised version of the Corvette produced, the Corvette Stingray. This was called the age of the stingray due to being the largest ever produced model of Corvette. Of the 1.5 million corvettes made and sold in total, 540,000 were Stingrays. This model started out strong, but due to emissions standards and a general malaise at GM during the 70’s saw a reduction in horse power and collector value.

1975 became a low point in the Corvette history, the car’s horse power was at its lowest, a measly 165, which was almost back to the 1953 level. It was also the year in which the last convertibles were built, because GM was convinced the American consumer wasn’t interested in buying them. It was also the year in which Chief Engineer Zora Arkus Duntov left the company. Even 5though the car was at it low point sale and production did rise during this period. In 1979 over 53,00 cars wre built and sold. These particular cars can be purchased at a very reasonable price, especially those built after 1975.

During the 80’s the Corvette was redesigned and the new model was launched in 84. This version of the Corvette had the second largest production run a total of 51,000. C4 Corvettes make up the 2nd largest cohort after C3’s about 350,000 cars have been built in a 12 year period. The convertible also returned during this period after an 11 year absence.

Corvettes made during the period from 1984-88 are some of the lowest priced cars on the classic Corvette market. Most of the base models are not considered collectable by most collectors. Which means they are a very good starter car for those wishing to collect Corvette, but are unlikely to hold value and may become a poor investment long term?

Chevrolet went back to the drawing board with next generation of Corvette, the C5 built from 1997-2004. Using the latest technology the C5 gained the lead in performance and made a return to motorsports. The car was entered in the Le Mans 24 and the American Le Mans series. It also proved a popular car on the North American SCCA Trans AM Series.

Production of the new Corvette started at just under 10,000 but eventually rose to a more stabilized amount of 35,000 per year. C5 Corvettes are still considered by many to be a modern sports cars rather than a classic and as such prices are still on a more downward trend. Long term these cars should become a good investment, especially the special editions of the C5.

2005 saw a new Corvette, this was no longer just a sports car, but built and fitted with the latest technology the Vette had become a supercar. It has the highest levels of sports car performance with speeds equal to its European counterparts. The C6 debuted with 400 HP, though later versions such as the Z06 produced 505 and in 2009 the ZR1 was able to smack out a whopping 638 HP from a 7 litre V8 engine.