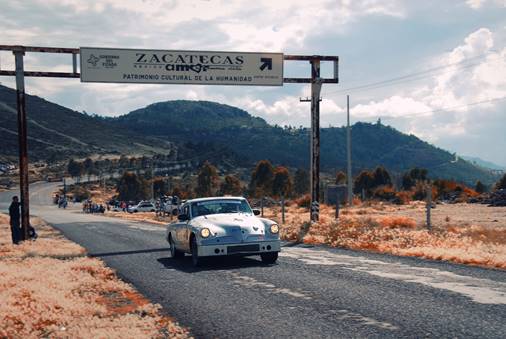 Congratulations to Benito Guerra, Jr. and Manuel Iguinez (Mexico) for winning the overall Chihuahua Express championship by more than 5 minutes in a Mini Cooper! Yes, a Mini. Guerra, with only 2.5 turbo liters, but an impressive rally record, finished ahead of two cars with more powerful turbo engines. Awesome!  https://www.youtube.com/watch?v=CqLuozr3UdU

Another pre-race favorite, Doug Mockett (US) and Angelica Fuentes (MX), hit a concrete barrier on the side of the highway when their steering broke in a transit at the end of Day #2. Both were OK, but their ’54 Olds Pan-Am car will need extensive repair.

Taz Harvey (US) and Paco Ortiz (MX) finished 1st in Pan-Am Historic B and 5th overall in a Datsun 240 Z, ahead of many 911s.  Ray Stephens and Ben Slocum (US) got second in Historic B and 9th overall.

There were 22 entries from Canada and the US of the 34 cars in the stage rally (65%), plus those in the Tour.  Sadly, three norteamericano crews withdrew from competition at the last minute. Last year, there were 13 cars from the US of the 22 entered (59%).  Entries from the US and Canada increased by 38% this year.

Carson Scheller and his daughter, Lauren (US), finished first in the Original Pan Am class.  They were followed by Jakes Shuttlesworth (US) and Ralf Christensson (SE) in Jake’s “new” ’54 Ford.

Frank McKinnon and John Putnam(US) in a 2012 Mustang were first in the modern stock car class (15th overall), followed by “rookies” George Schroeder and Laurence Seiterle from Texas (24th overall) in another Mustang.

Vance Stewart II and daughter Kristen “BC” Stewart were styling and smiling in daddy’s new 2005 Saleen Mustang during the ChiX Tour.

And special congrats to Kaming Ko (China) and Stafford Galen (US) for finally finishing a rally in their classic Dodge Dart.

Fifteen of the 25 cars than finished the race were from Canada and the U.S.  Chacho Medina warmly welcomed all the newcomers, including:

Dennis Varni and Larry Hursh in their beautiful Nash (DNF)

Doug and Max MacDonald in a Porsche 944 Turbo (DNF).

All competitors praised the organizer Chacho Medina and the authorities of the city and state of Chihuahua for another great event!  Mr. Medina is considering adding a fourth day to the competition for 2017 upon the request of some of the competitors.

Event organizer Chacho Medina has set the tentative dates for the 2017 ChiX as April 27-30.  These dates are subject to the approval of various authorities.  If it stands, these dates will allow competitors to warm up in the Big Bend Open Road Race (BBORR) the previous weekend and then motor down to Chihuahua for the Xpress.

BBORR is a “bracket” race that runs on a closed highway 43 miles from Ft. Stockton to Sanderson, TX and return.  There is an unlimited-speed class, but most of the cars attempt to finish on their target time.  Their speed “bracket” is based on the car’s safety equipment.  That is, the faster you go, more roll cage is required.

The Pan-Am is scheduled for October 13-20, starting in Huatulco and ending in Durango.  Overnights along the way include:  Oaxaca, Mexico City, Toluca, Morelia, Guanajuato, Zacatecas.

The organizers have decided to allow modern BMW Mini’s in the event.  Of the 35 entries listed on the official web site five are Mini’s.  The Pan-Am’s U.S. representative is now Ms. Renée Brinkerhoff of Denver, CO.

This new rally, in its second year, is scheduled for June 23-26.  For more information go to www.rallyhistoricotranspeninsular.mx. Also on Facebook. The rally will begin in Tijuana and end 925 miles later down in Cabo.  This event will also include a touring class for those who want to make the trip at a more leisurely pace.

Editor’s note:  This is the deal of the century!  A well-built, safe car with a re-enforced frame, superb electricals, and drive train.  Adjust the seats and away you go! 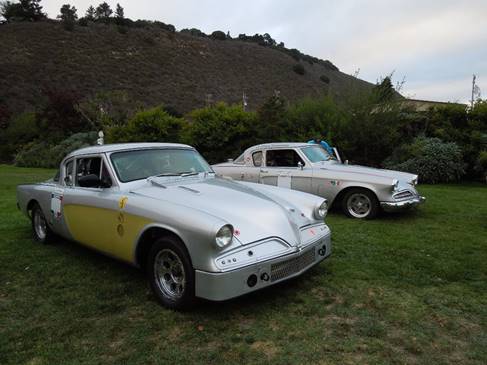 If you want a package deal that includes a Pan-Am and/or Express entry, stage rally instruction, transport of the car to Mexico, and service for the car during these races, contact gbledso@aol.com.

Like most motorsports, road-racing in Mexico is dangerous and addictive.  Be careful, be prudent.  CARRERAS NEWS is neither an official publication of any organizer nor an advertisement for any event.