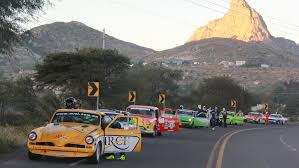 Event organizer Chacho Medina has confirmed April 19-22, 2018 as the dates for the next Chihuahua Express and Express Tour.  Registration and tech inspection of the cars will begin on Wednesday, April 18.  The qualifying run will take place on April 19 on one of the remaining stretches of the original Pan-American Highway just outside of Chihuahua.

The Express combines modern and vintage cars in a variety of classes.  Historic cars run in their appropriate Pan-Am class.  The three-day route is 1000 miles long, with more than 300 miles of unlimited speed stages.

Early registration is now open.  If paid before the end of the year, the early entry fee for the unlimited-speed, stage rally is $3200.  And if five nights at the Sheraton-Soberano Hotel are added, the combined cost will be $3950, a discount of $75.  After the first of the year, the entry fee moves to $3500 and $4250, if the entry and five nights at the hotel are paid at the same time.  The hotel rooms are normally $165 per night (taxes included), and most competitors stay for five nights, Wednesday through Sunday.

Last year there were 57 entries, almost tying the record of 58 set in 2013.  Two entries had to drop out at the last minute.

Over the years the “Chi-X” has enjoyed the full support of the city and state of Chihuahua, with police stationed along the race route, plus ambulances and tow trucks at the ready.

According to the final results posted on the Pan-Am web site, 69 Pan-Am cars started the event which was won by Richardo Codero and Marco Hernandez from Mexico in an all fiberglass, tubed ’54 Studebaker.   Last year’s champ, Hilaire Damiron (France) and his wife Laura were second, only 1:17 behind.  Gabriel Perez and Angelica Fuentes, another pre-race favorite, had a couple of minor mishaps that put them back in 4th overall.

Looking at the results, it is virtually impossible to tell how many cars actually finished the event, but one spectator counted 58 Pan-Am cars entering Zacatecas on the next to the last day.  Last year only 30 or so entered that city.   There were five historic cars running in the Exhibition class, along with 11 modern BMWs and Minis in a separate event.

Among the 14 entries from the U.S., the highest finisher was Doug Mockett and his co-piloto Manuel Iguiniz (Mexico) in 8th place.  Taz Harvey and Francisco Ortiz (Mexico) was listed as the 2d highest U.S. entry in 22d overall, followed by the only woman driver in the event, Renée Brinkerhoff, 24th overall, plus first in Sports Menor for the second time, a new Pan-Am record for a woman driver.  Robert Curry was 2d in that class, 4 minutes behind her.

One U.S. entry crashed the first day and another withdrew over health concerns.   From Canada, Karlo Flores finished 16th overall and first in class in his very special Porsche 356, running in Sports Major.

The Pan-Am cars included 11 Mustangs, 11 Studebakers, 8 Porsche 911/912s, and a bevy of Ford Falcons. Only one Chevy and a Mopar with all the Fords in Historic C, the largest class.  Somewhat surprisingly, there were 6 Porsche 356s in the event.  Sadly, there were no starters in the Original Pan-Am class.

There were several serious wrecks, as expected, with a broken pelvis being the most serious injury reported.  The car, an Opel Commodore, went off the road and crashed into a gap between a wall and a house.   The only Chevy, a Corvette, also crashed badly, but is listed as finishing in 38th place overall and 7th of 16 cars in Historic C.  And one of the leading Porsche 356s rolled badly, too.

As noted, there were only 14 entries from the U.S., the lowest number ever.  The number of U.S. entries will only increase when the route and other aspects of the event are improved

The third annual Rally Historico down the Baja peninsula is schedule for June 21-24, 2018, according to event organizer Pedro Vargas.  The event is now sanctioned by the Mexican Rally Commission, which should help attract more Mexican entries.  In the first two years, almost all of the entries have been from the U.S.  The event starts in Ensenada and runs about 900 miles down to Cabo on the main highway.  No vehicle import permit is required to drive a U.S. registered vehicles into Baja.  For more information, check out the rally’s FaceBook page.

Auto racing is inherently dangerous and unless you drive prudently, it can be seriously injurious to your health.  Rallying through the mountains of Mexico can also be addictive, possibly ruining your desire to compete on tracks.  Please note that the opinions expressed herein are the editor’s and do not represent the views of any race organizer on either side of the border.