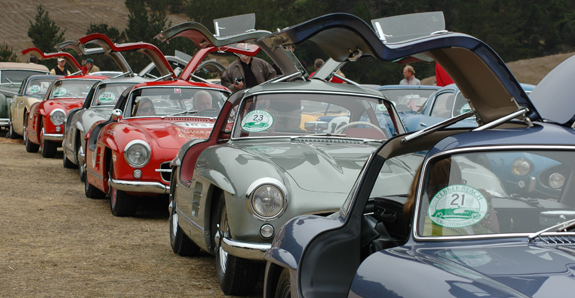 Featured marques and classes for the 2011 Pebble Beach Concours d’Elegance have been determined, and the crucial process of selecting the 200 cars and motorcycles that will compete on the 18th fairway of Pebble Beach Golf Links on August 21 is now underway.

“The success of everything we do really hinges on this one thing—selecting the best cars and motorcycles to compete here at Pebble Beach,” said Concours Chairman Sandra Button.

Entry applications were mailed to interested enthusiasts this week and are due to be returned by January 15. Applications are then vetted by members of the Selection Committee, and formal invitations to compete are delivered in the spring.

A major focus for the 61st annual Concours will be the 125th anniversary of the automobile. In 1886, Karl Benz received the first patent for a gas-propelled car (the three-wheeled Benz Patent Motorwagen). Later that same year, Gottlieb Daimler mounted an engine on a four-wheeled vehicle. The automotive era had begun.

The 2011 Pebble Beach Concours will feature:

* The creations of Benz and Daimler and their successors—notably, Mercedes and Mercedes-Benz. In addition to classes emphasizing style and technology, one preservation class will be devoted solely to these marques.

* Early Rolls-Royce Silver Ghosts (1907–1919). Created in the Edwardian era and considered by many historians to be the most famous luxury cars ever made. These smooth, exceptionally reliable cars — often noted for their ghostlike, quiet ride — are among the most desirable collector vehicles in the world.

* Stutz Centennial. Often called America’s first sports car, a Stutz was entered in the 1911 Indy 500 and finished 11th, becoming known as “the car that made good in a day.” The company’s high performance Bearcats featured one of the first multivalve engines.

* The Birth of the Ferrari 250 GTO. This Enzo Ferrari creation, engineered by Giotto Bizzarrini and designed by Sergio Scaglietti, dominated Grand Touring races in the early 1960s. A total of 39 Ferrari 250 GTOs were produced between 1962 and 1964, and they are often said to be Ferrari’s crowning achievement.

* Italian Motorcycles. The Concours will feature motorcycles for the third consecutive year, with the creations of Italian manufacturers like Ducati, MV Agusta, Moto Guzzi and others taking center stage in 2011.