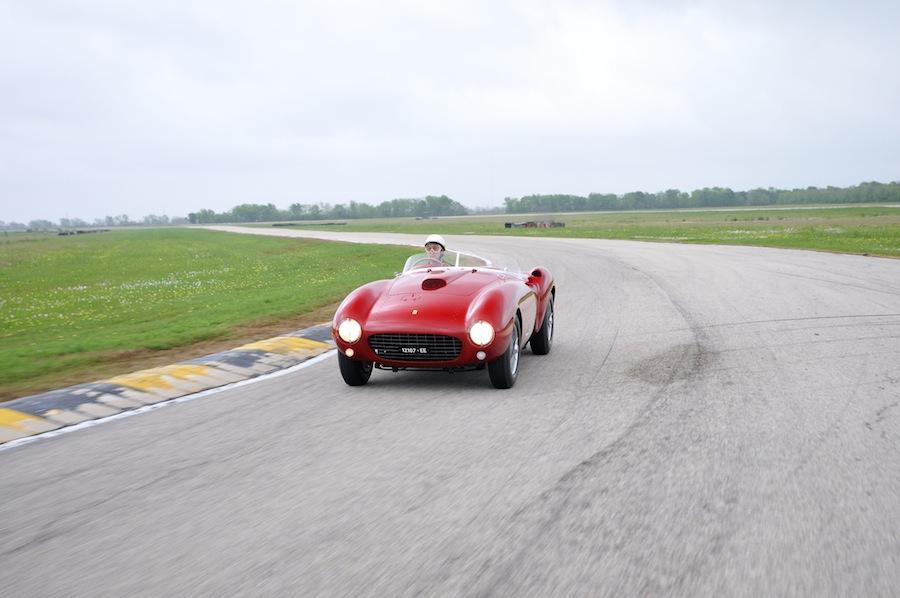 Even by most classic-Ferrari tale standards, the story behind the star of Mecum's 2014 Monterey auction is remarkable. From its beginnings as a winning racer in the stable of a controversial Los Angeles construction magnate to its restoration in the hands of two Southern California college professors, this seductive 1954 Ferrari 375 MM Spider has more history in its Pinin Farina-sculpted body than an entire fleet of lustrous Prancing Horse garage queens.

"This 375 is simply an incredible racing car linked to the beginning of the Ferrari mystique, but step back from that and you see an amazing life," says Mecum's Sam Murtaugh, who adds that the auction house estimates the rare beast will fetch between $8 and $10 million when it hits the block during the company's Aug. 14-16 event.

"The car was a West Coast road warrior in its early years, with some great drivers getting behind its wheel," adds Murtaugh. Although there was a period where the car changed hands and shape, it was brought back to its original state by two men known for their perfectionism. "We feel confident about the price given that a 335 MM went for $9 million and a (more powerful) sister car, a 375 Plus, sold at auction for $19 million. Those are solid comparables."

Downshifting to the beginning, serial number 0362AM left Maranello and went directly to the Los Angeles home of Anthony Parravano, who was busy amassing a healthy collection of race-ready exotics. The 375 MM caused an immediate stir, hitting 172 mph at the dry lake bed of El Mirage in the spring of '54. A few months later, the car took first place at a race through San Francisco’s Golden Gate Park with car dealer Jack McAfee at the helm. McAfee repeated his winning ways a month later at Offutt Air Force Base in Nebraska.

The 375 MM (MM for Mille Miglia, the storied 1,000-mile race around Italy that would be shut down after its 1957 running resulted in the deaths of drivers and spectators alike) continued to make a name for itself over the next six years. Among the famous drivers who experienced the power of the 2,000 lb. car's 4.5 liter V-12 were Dan Gurney, Bob Bondurant and Skip Hudson. Veteran SCCA racer Don Hulette would write the final chapter in the 375's early race history, taking third at a Grand Prix for Sports Cars Consolation Race in Riverside, Calif.

Let's return for a moment to the illustrious car's first owner. By 1957, Parravano had become entangled in a cat and mouse game with the IRS, which immediately sought to seize his expensive four-wheeled toys as way to claim just some of the businessman's unpaid taxes.

Parravano's reaction was to immediately move his cars to Mexico; some made it over the southern border, and later were sold off by his heirs. Others, including the now-modified 375 MM (tinkering with race cars, even Ferraris, was common in racing's early days), were put on the block by federal agents. Curiously, just three days before a 1960 court date at which Parravano was to have cleared up his tax obligations, the man vanished and was never heard from again.

Another Southern California construction magnate, Frank Arciero, took custody of the 375 MM; other parts associated with 0362AM were purchased from Parravano's racing operation by a man named Bill Sorrell, parts that years later would be critical to an accurate restoration.

In 1965, Arciero sold the car to collector Ron Kellogg. That vehicle would barely be recognizable as the glamorous machine in Mecum's spotlight: it was painted gold and featured a Kamm-style tail. But its underpinnings were pure 375 MM. Three years later, recognizing both the challenge and the car's heritage, two college professors, Charles Betz and Fred Peters, purchased the rolling chassis, spare wheels and set about bringing the car back to its glory.

Sourcing parts that were either original to this car or other 375 MMs, Betz and Peters - passionate and now legendary Ferrari restoration experts - got to work. And hit walls: Sorrell resisted selling his 0362AM parts. For decades.

Finally, in 1986, Sorrell sold all his Ferrari inventory to renowned Ferrari restorer David Cottingham at DK Engineering in England. Before the shipment headed overseas, Sorrell allowed the professors to purchase dozens of parts related to 0362AM, which, astonishingly, even included the car's ID plate, which Sorrell had carried in his wallet for years. Another providential stroke of luck came when the Parravano family loaned a series of original photos to Betz and Peters, which allowed the duo to fine tune body panels.

Today, the car looks as it did when it rolled off a flatbed and into Scuderia Parravano. A notable exception is its engine, which comes courtesy of a different 375 MM; when Arciero sold the car at the end of its racing life, it was being powered by a Maserati 4.2 Indianapolis powerplant. That may sound outrageous today, but fifty years ago these cars weren't seen as seven-figure museum pieces but rather practical tools with which to win trophies. If a different engine might do the trick, so be it.

Two years ago, 0362AM made its new-millennium debut at a Ferrari Club of America event in Indian Wells, Calif.; in 2013, it hit the Carmel Concours on the Avenue event during Pebble Beach Concours d'Elegance week, and took Best of Show. That likely isn't the last beauty pageant this 375 MM Spider will win. But the real question is whether its next owner will have the stuff necessary to take this battle-tested Ferrari back to its original habitat. The race track.