Just added a bunch of Riverside Can-Am photos, still more to follow. Rex Mays 300 Indy car races next I think. Maybe Trans-Am,too many to choose from. The 2010 Tasman Revival Meeting is all set for Eastern Creek on November 26-28 2010. The team at Motorsport Retro have produced the website for this great event and its now live at www.TasmanRevival.com.

Just spent a couple days scanning old photos from Riverside Raceway. Sure brings back memories of when cars were not all the same.

This exciting movie from the 1954 LCP was too long to post in the video section but if you're a La Carrera fan well worth the viewing.

Does calling your vintage Jaguar a BLOODY B**** fix the problem? 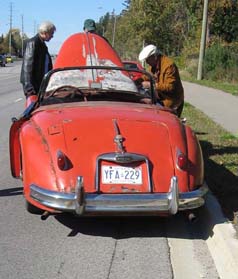 A typical "Bloody B**** Breakdown". Out in the middle of nowhere a small copper pipe decided to break off spewing and spilling out motor oil all over the highway. Notice the trail of oil which on that day extended well over a…

30Years Race Team Experience - I built them when they were new.Let me build one for you!

Just found that racecar of your dreams? But it's in an

assortment of boxes! Want to see it come to life in your lifetime?

race preparation projects for your formula or…

The McLaren M8F that never was …