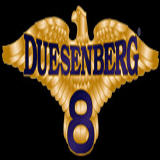 Duesenberg was based in Auburn, Indiana from 1913 to 1937, and is most famous for their high-quality, record-breaking roadsters. 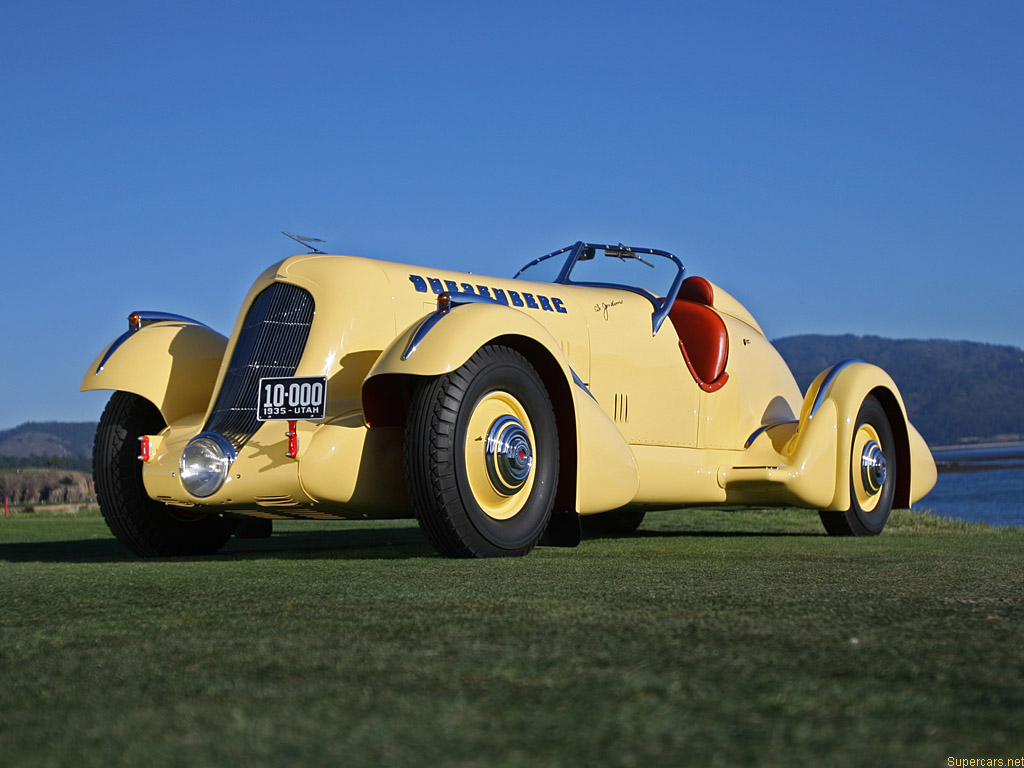 Duesenberg was an Auburn, Indiana based luxury automobile company active in various forms from 1913 to 1937, and is most famous for their high-quality, record-breaking roadsters.

History
In 1913, German brothers Fred and August Duesenberg founded Duesenberg Automobile & Motors Company, Inc. on State Street in Garner, Iowa to build sports cars. Born in 1876 and 1879 in Lemgo, Germany, the two brothers were self-taught engineers and built many experimental cars. Duesenberg cars were considered some of the very best cars of the time, and were built entirely by hand. In 1914, Eddie Rickenbacker drove a "Duesy" to finish in 10th place at the Indianapolis 500, and a Duesenberg won the race in 1924, 1925, and 1927.

1923 saw the only use of a Duesenberg as the pace car at the Indianapolis 500. In 1921, Jimmy Murphy became the first American to win the French Grand Prix when he drove a Duesenberg to victory at the Le Mans racetrack. 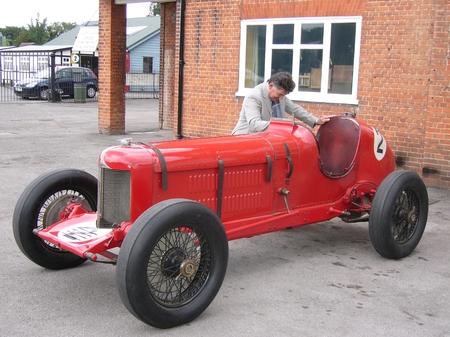 Duesenberg Automobile and Motors Company moved from New Jersey to a new headquarters and factory in Indianapolis in July 1921 to begin production of passenger vehicles. Although the Duesenberg brothers were world-class engineers, they were unable to sell their Model A car, their first "mass-produced" vehicle—just 667 were ever made. It was considered extremely advanced, offering features such as dual overhead camshafts, four-valve cylinder heads, and the first hydraulic brakes offered on a passenger car. The company went into receivership in 1922, finally being acquired from creditors by a Fred Duesenberg-led investor group in 1925, forming the Duesenberg Motors Company. 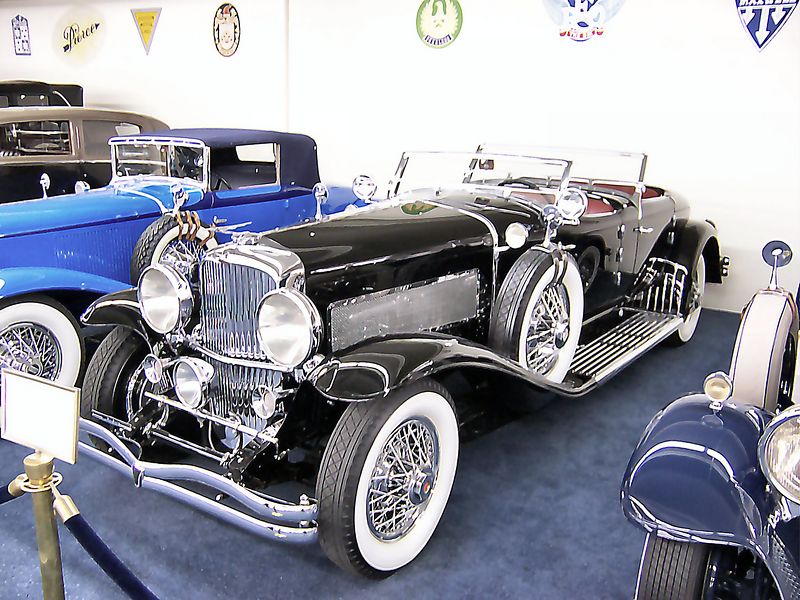 E.L. Cord, the owner of Cord Automobile, Auburn Automobile, and other transportation firms, bought the company in 1926 for the brothers' engineering skills (and the brand name) in order to produce luxury cars. Hiring Fred Duesenberg to design the chassis and an engine that would be the best in the world, the newly revived Duesenberg company set about to produce the Model J, which debuted at the New York Car Show of 1928. In unsupercharged form, it produced a whopping 265 horsepower (198 kW) from a dual overhead camshaft straight 8 and was capable of a top speed of 119 mph (192 km/h), and 94 mph (151 km/h) in 2nd gear. The supercharged version, sometimes called the SJ, was reputed to do 104 miles per hour (167 km/h) in second and have a top speed of 135–140 mph (217–225 km/h) in third. Zero-to-60 mph (100 km/h) times of around eight seconds and 0-to-100 mph (160 km/h) times of 17 seconds were reported for the SJ in spite of the unsynchronized transmissions, at a time when even the best cars of the era were not likely to reach 100 mph (160 km/h). Duesenbergs generally weighed around two and a half tons; up to three tons was not unusual, considering the wide array of custom coachwork available. Only the chassis and engine were displayed at New York, since the interior and body of the car would be custom-made by an experienced coachbuilder to the owner's specifications. The bodyworks for the Duesenbergs came from both North America and Europe, and the finished cars comprised some of the largest, grandest, most beautiful, and most elegant cars ever created. The chassis cost $8,500 ($9,500 after 1932); the completed base model cost $13,500; and a top-of-the-line model could reach $25,000 at a time when the average U.S. physician earned less than $3,000 a year. 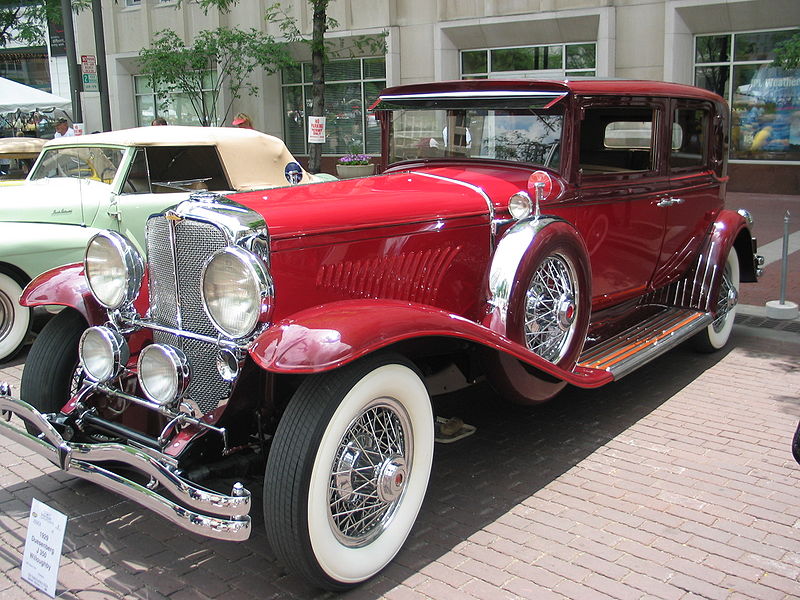 The supercharged Model J, with 320 hp (often referred to as "SJ") was introduced in 1932. Special-bodied models, such as the later "Mormon Meteor" chassis, achieved an average speed of over 135 mph (217 km/h) and a one-hour average of over 152 mph (245 km/h) at Bonneville Salt Flats, Utah. The SJ's supercharger was located beside the engine; to make room for it, the exhaust pipes were creased so they could be bent easily and extended through the side panel of the hood. These supercharged cars can be recognized by these shiny creased tubes, which Cord registered as a trademark and used in his other supercharged cars from Cord and Auburn. It was said, "The only car that could pass a Duesenberg was another Duesenberg—and that was with the first owner's consent." 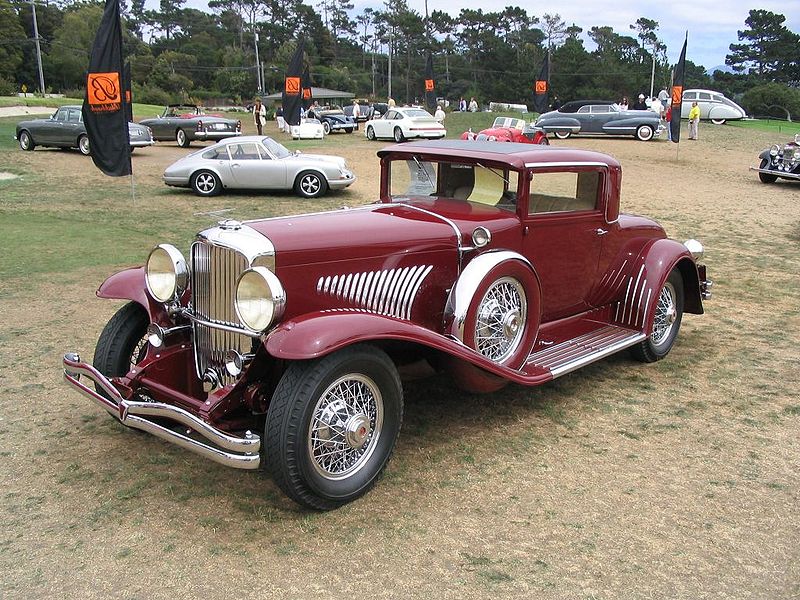 The Duesenberg quickly became one of the most popular luxury cars in America and also in Europe, driven by the nobility, rich and famous, among them Clark Gable, Gary Cooper (each driving one of the two very rare SSJ 125″ short-wheelbase convertibles), the Duke of Windsor, the King of Spain Alfonso XIII, who was very keen on motoring, chose his now missing Duesenberg J, among his cars, to go to exile after the proclamation of the Second Spanish Republic. Duesenberg advertising claimed it was the best car in the world, and their world-beating performance and extreme opulence tended to back that up. There was a gradual evolution (up to the 1937 model) to preserve the "stately lines" while moving into a more integrated mode of styling. The final evolution of the Duesenberg engine was ram-air intakes, which were added to some of the last supercharged models to produce 400 hp (298 kW), referred to as "SSJ" (also a name never used by the factory). Of the 470 Model Js[1] and 11 SJs produced between 1928 and 1937, about 384 are extant.[2] Duesenberg ceased production in 1937 after Cord's financial empire collapsed.

Model X Duesenbergs are very rare. According to Randy Ema, the top Duesenberg authority in the United States, only 13 were built. They fit in between the Duesenberg Model A and the famous J and SJ; only four known Xs survive. 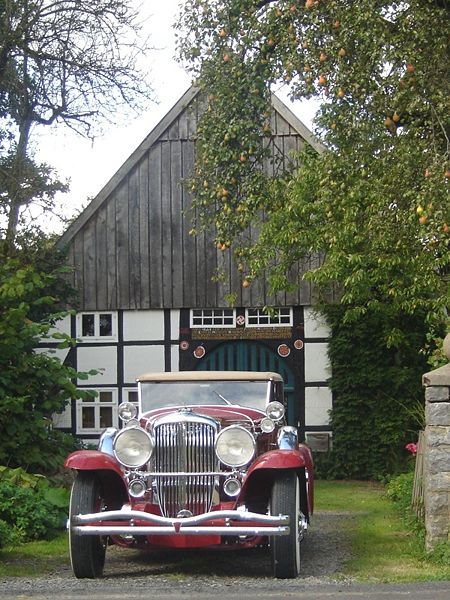 Revival
After World War II, August Duesenberg tried to revive the Duesenberg name, but was unsuccessful; several later attempts were also unsuccessful. The closest came in the mid-1960s, with Fritz (August's son) at the helm and Virgil Exner as the stylist, using the chassis of a 1966 Imperial and a Chrysler engine. One of Exner's Duesenberg designs was later produced as the modern Stutz Bearcat.

A 1970s Duesenberg was also created, based on a Cadillac Fleetwood and with modern styling, although its production was not high.

In 1969, another car was the 1969 Pontiac Grand Prix SJ. Approximately 100 of these cars were purchased brand new and shipped from GM to Italy, where they were provided with a new bodywork, pearlescent paint, and a custom interior. Other than that, they were absolutely stock Pontiacs. Finish and final assembly took place in Beverly Hills, and they initially had a list price of around $60,000. 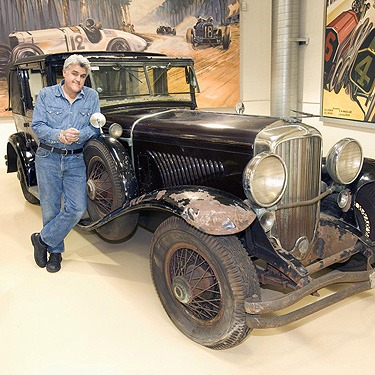 Beginning with its introduction in 1975 at the ACD Festival in Auburn, Indiana, the reproduction Duesenberg II automobile was produced and sold through mid-2000. Five models of the original Duesenbergs were made, each one carefully copied from an original and visually identical, with a modern Ford V8 driveline and modern comfort features. These exacting reproductions sold for up to US$225,000.

The Duesenberg name still lives on as an object of opulence and luxury. It is estimated that as of 2006, approximately 50% (or roughly 600) of the originally manufactured Duesenbergs are still on the road as classic cars or "oldtimers". Today, Duesenberg Model Js and SJs are among the most desired collectible classic cars in the world. It is not uncommon today for a Duesenberg in good condition to sell for over $1-million, and a few sell for multimillion-dollar figures. (Note: at the Barrett-Jackson auction in January 2008, a Duesenberg J went for more than $1,000,000.)

Etymological note
The origin of the American slang word "doozy," meaning something excellent or powerful, is either the Duesenberg's nickname, "Duesy," or an older term (derived from earlier slang, "daisy"). Encarta.com describes the origins of the term as unknown, and dictionary.com lists it as possibly a blend of the terms "daisy" and "Duesenberg." Etymonline.com lists it as "1903 (adj.), 1916 (n.), perhaps an alteration of daisy, or from popular Italian actress Eleonora Duse (1859–1924). In either case, reinforced by Duesenberg, an expensive, classy make of automobile, 1920s–30s."

You need to be a member of Duesenberg Owners Group to add comments!

An invitation to Duesenberg owners:

Have a 24x36 photo illustration of your vehicle created by Ed Dooley Design.