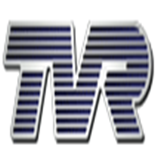 Since 1949, TVR have fuctioned as an independent British manufacturer of sports cars based in the English town of Blackpool, Lancashire. 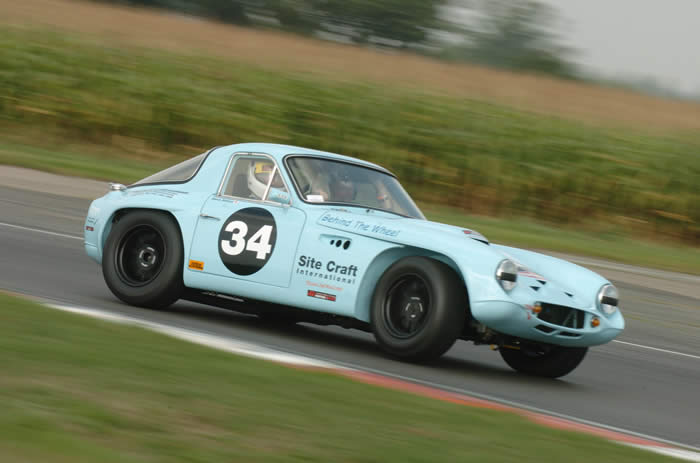 TVR is an independent British manufacturer of sports cars based in the English town of Blackpool, Lancashire. The company manufactures lightweight sports cars with powerful engines and is the third-largest specialised sports car manufacturer in the world, offering a diverse range of coupés and convertibles. Most vehicles use an in-house straight-6 cylinder engine design; others an in-house V8. TVR sports cars are composed of tubular steel frames, cloaked in aggressive fibreglass body designs.

TVR's two arms are TVR Engineering, which manufactures sports cars and grand tourers, and TVR Power, their powertrain division. The company has a turbulent recent history and an uncertain future.

History
Foundation
Trevor Wilkinson (14 May 1923 - 6 June 2008) was born in Blackpool and left school at 14 to start an engineering apprenticeship at a local garage. In 1946 he bought a wheelwright's business in Blackpool, renaming it Trevcar Motors in 1947, for the purpose of selling and repairing cars and light engineering. 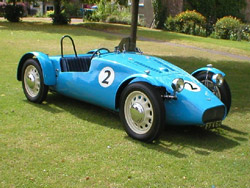 In 1947, Wilkinson built his first car, a special two-seater body on an Alvis Firebird chassis for himself. As a result, Wilkinson with partner Jack Pickard then started a separate company, TVR Engineering, with a name derived from Wilkinson's name - TreVoR. Their first car was an alloy-bodied two seat body on a tubular chassis, which appeared in 1949. 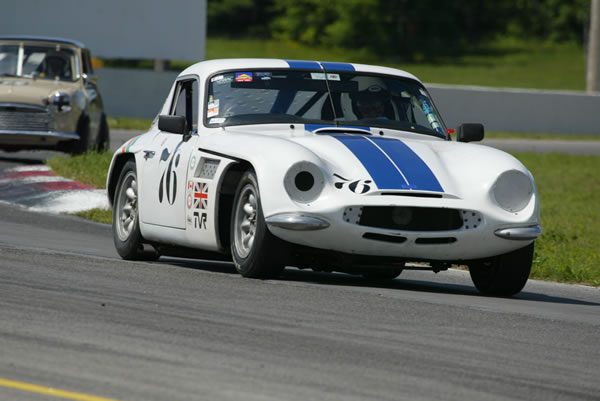 In 1953 the concept of glass-reinforced plastic bodywork over a tubular steel backbone chassis was accepted, and continued throughout TVR's current production history. In 1954, TVR Engineering was renamed TVR, in light of the launch of the first "production" car called the Mk1, later name Grantura. The glass fibre body design and layout remained, in modified form, until replaced by the angular wedge design Tasmin in 1980. At launch in the 1950s, TVRs were powered by 4-cylinder engines from Coventry Climax, BMC or Ford, the performance models having Shorrock superchargers. As with many other British sports cars, engine sizes remained under two litres, and all produced less than 100 bhp (75 kW). As most TVRs were sold in the domestic British market, to avoid a British tax on assembled cars many of the early cars were sold in kit form - a practice which continued until the 1970s, when the tax loophole was closed and the kit-form option removed.

In April 1962 Wilkinson and Pickard left the company to set up a specialist fibre-glass engineering business. On retirement, Wilkinson moved to Minorca, Spain, where he died aged 85, on 6 June 2008.

1960s and 1970s
In the 1960s, American motor dealer Jack Griffith decided to put a 4.7 litre V8 engine from an AC Cobra he owned into a TVR Grantura, in much the same way that V8s were first transplanted into AC Cobras (It is in honour of Jack Griffith that the TVR Griffith was so-named). 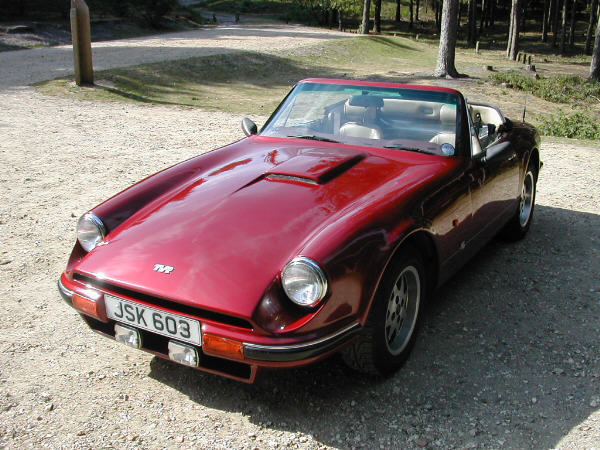 Wheeler ownership
In the 1980s, under the ownership of Peter Wheeler — a chemical industry consultant and TVR enthusiast — TVR moved away from naturally-aspirated and turbocharged V6s back to large V8s, namely the Rover V8 (to which Rover bought the intellectual property rights from Buick). Capacity grew from 3.5 to 4.5 litres. In the 1990s, TVR Power modified a number of Rover V8s, but subsequently developed an in-house engine design. The AJP8 engine, a lightweight alloy V8, was developed by engineering consultant Al Melling along with John Ravenscroft and Peter Wheeler (hence the AJP initials), a notable achievement for a small maker. The new engine was originally destined for the Griffith and Chimaera models, but development took longer than expected and it finally became available in the Cerbera and Tuscan race cars. 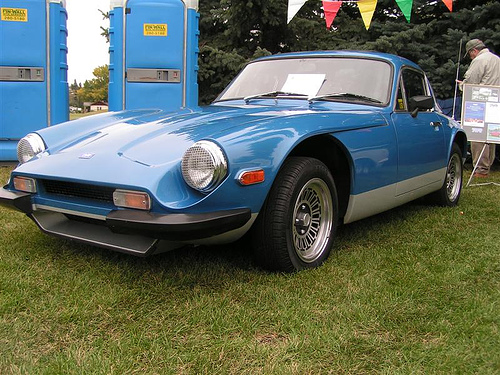 Perhaps more significantly, Peter Wheeler was instrumental in the body design of TVR cars during his ownership. He managed a design team that produced a number of acclaimed and resolved body designs including the Chimaera, Griffith, Cerbera, Tuscan, Tamora, T350, Typhon and Sagaris. These attention grabbing works of sculpture helped to keep TVR on the front covers of magazines around the world and thus in the public eye.

Wheeler subsequently directed the design of a straight-six derivative of the AJP8 that would be cheaper to produce and maintain than the eight. This engine, designed by John Ravenscroft, became known as the TVR Speed Six engine, and powers current TVRs.

Smolensky ownership
In July 2004, 24-year-old Nikolay Smolensky bought the company from Wheeler, for about £15 million. Despite his Russian nationality, Smolensky said he intended TVR to remain a British company.

In April 2006, responding to falling demand and with production rumoured to have dropped from 12 cars a week to 3 or 4, TVR laid off some of its 300 staff. At the same time, the firm announced plans to move to updated facilities in the Squires Gate district of Blackpool, citing impending expiry of the lease of the current factory in late 2006, where owner Peter Wheeler was said to be planning to build a housing estate.

In October 2006 Smolensky announced that body production and final assembly for TVR would move to Turin, Italy, with only engine production remaining in the UK. In protest at this and to show support for the workers, a large number of TVR owners paraded through central London on 26 November 2006. Dubbed "London Thunder", it was also an attempt at the official world record for the biggest one-marque convoy on record.

By December 2006, it emerged that Smolensky had split TVR into a number of different companies;

Brand and intellectual property rights had been transferred to a core Smolensky company.
TVR Motors - held the licence to the brands and intellectual property in the UK, as well as sales and marketing of the brand
TVR Power - the parts and spares business had been sold to a management buyout .
Blackpool Automotive - the factory and manufacturing assets
On 13 December, Smolensky and production director Mike Penny resigned as directors of Blackpool Automotive, being replaced by Smolensky UK personal assistant Roger Billinghurst and 25 year old Austrian Angelco Stamenkov. By 24 December Blackpool Automotive was in administration. Administrators are now seeking legal clarification on the ownership of certain assets, including the brand and intellectual property, to see what assets the company has and who should pay the redundancy notices of the remaining 200 workers.

On 22 February 2007 it was revealed that Smolensky is once again the owner of the company after being the highest bidder. On 28 February 2007, less than one week after reacquiring TVR, he has reportedly announced plans to sell the company to Adam Burdette and Jean Michel Santacreu, who intend to export TVRs to the United States market. On 8 October 2007 it was found that Smolensky was still in control of the company and was hoping to restart production, with a target of 2,000 cars to be sold in 2008. On 11 July 2008 It was reported that TVR announced the relaunching of the Sagaris as the Sagaris 2, at its new centre near Wesham in Lancashire.

You need to be a member of TVR Owners Group to add comments!

Comment by Steve Lewis on August 10, 2009 at 5:35am
New member.
Started the TVRCC Challenge in UK 1999
Won the Championship 02 and 04.
This is now the TVR Challenge with many old and current TVRs racing.

This year is the first in 15 that I have not renewed my license!

I did once meet Mr. Smolenski at the factory because I wanted to set up the TVR Drivers Club. He closed the company before I had an answer.

Over the years I have owned several TVRs but was more into racing them.

I live across the road from Steve heath who writes the Technical books.
In fact some of the pics in the books are the undreside of my cars.
I highly recommend these publications.shpub.co.uk

Comment by Marshall Moore on December 4, 2008 at 8:08am
Alan,
yes it has been quiet, as I think this site is still very much undiscovered by the bulk of the TVR faithful.
Marshall