Created in 1966, the Trans-American Sedan Championship was derived from the Sports Car Club of America's A & B Sedan amateur Club Racing classes. 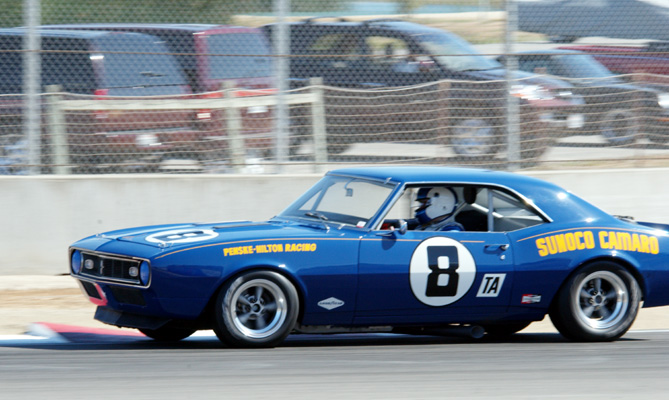 Created in 1966, by SCCA President John Bishop, the Trans-American Sedan Championship was derived from the Sports Car Club of America's A & B Sedan amateur Club Racing classes, and was divided into 2 classes; the Over 2.0 Liter (O-2) and Under 2.0 Liter (U-2), with both classes running together. Formed at the dawn of the “pony car” era, this series was best known for competition among American V8 sedans such as the Ford Mustang, Chevy Camaro, Plymouth Barracuda, Mercury Cougar, AMC Javelin & AMX, Pontiac Firebird, Dodge Dart & Dodge Challenger in the 1960s and early 1970s. A fan favorite in the early '70s was the "Grey Ghost", a '64 Pontiac Tempest prepared by Pontiac Chief Engineer Herb Adams and a his young Engineers, which had once been Adams' wife's car. Marques such as Porsche, Alfa Romeo, Datsun, Mini-Cooper, Saab, and Volkswagen competed in the in the series Under 2.0 Liter category. 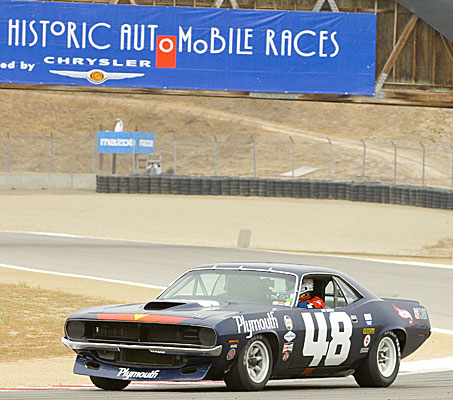 The Sports Car Club of America (SCCA) is the sanctioning body for the series and holds the rights to the "Trans-Am" name. The series was most recently operated by the Champ Car World Series and ran the majority of its races in support of the parent open-wheel championship. 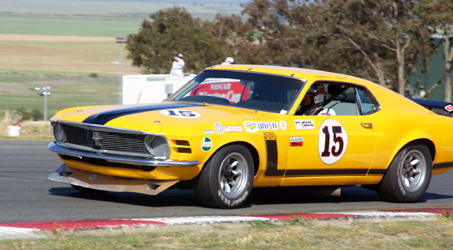 Due to a lack of participants and interest, the series ceased operations after the 2005 season. However the Sports Car Club of America (SCCA) continued to own the name and permitted Heartland Park Topeka to run two races in September and October 2006 using Trans Am rules and the Trans Am name. In 2009, the SCCA will revive the series based on the GT-1 class and five races have been announced, with former champion Greg Pickett sponsoring the series with the Muscle Milk brand, using the SCCA's GT-1 category rules. 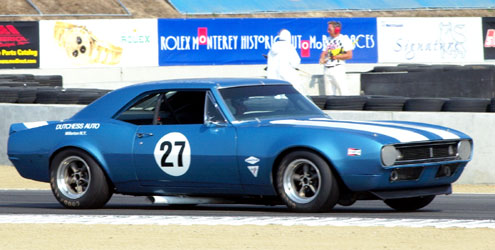 History
The Beginnings (1966 - 1967)
At first, the Trans-Am vehicles were primarily modified versions of the road-going car. The competition was divided into two classes- an "Under 2 Liter" class (predominantly small European sedans) and the "Over 2 Liter" class (displacement limited to 5.0 liters, or 305 cu. in.). 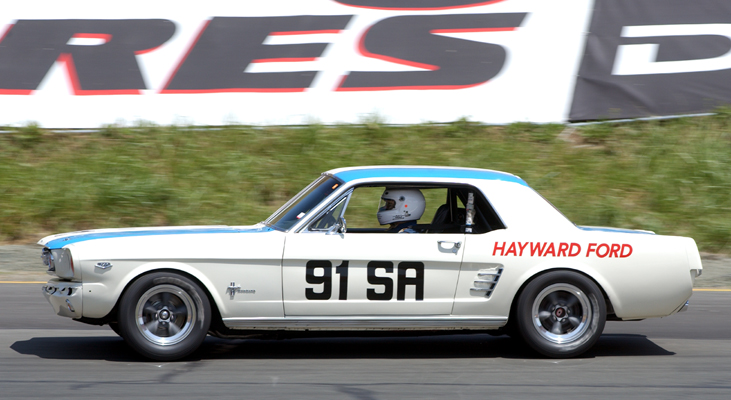 The first race was in 1966 at Sebring International Raceway. The overall win went to Jochen Rindt driving an Alfa Romeo GTA (an Under 2 Liter entry), with Bob Tullius (driving a Dodge Dart) taking second overall, but first in the Over 2 Liter class. The separate 12 Hours of Sebring race that same weekend was marred by tragedy: driver Bob McLean is killed in one accident and another incident between Mario Andretti and Don Wester resulted in the deaths of four spectators who were struck by Wester’s car after they entered a prohibited area.

The Golden Era (1968-1972)
These years were largely dominated by Mark Donohue, driving for Roger Penske. Penske campaigned Chevy Camaros through 1969, when he signed with American Motors to race the Javelin in 1970 and 1971. Donohue would chalk up 20 race victories between 1967 and 1970 and three unofficial drivers's championships, the third achieved in 1971. The 1970 Trans Am series is regarded by most racing historians as the high water mark of American road racing. Every "pony car" manufacturer was represented with a factory team and top driving talent: Chevrolet had the Chaparral Chevy Camaro Z28 team with Jim Hall, Ed Leslie, and Vic Elford. Ford's Bud Moore Boss 302 Mustangs were driven by Parnelli Jones and George Follmer. For Plymouth, the All American Racing Cudas were handled by Dan Gurney and Swede Savage. Sam Posey, and occasionally Tony Adamowicz, drove Ray Caldwell's Autodynamics Challenger TA, Jerry Titus had the Pontiac TransAm, and Roger Penske's Sunoco AMC Javelin team starred Mark Donohue and Peter Revson.

Most of these cars have been preserved or restored and are still racing in vintage events today. The Historic Trans Am Group events often reunite drivers from the era to with the cars they raced in "back in the day".

The Two-Five Challenge
In 1969 the "U2" class was renamed when the engine displacement limit was increased to 2.5 litres. Porsche 911s and Alfa Romeo GTVs were dominant, later joined by the Datsun 510. Successful drivers included Peter H. Gregg, Horst Kwech, Bob Sharp, and John Morton. The Vintage Sedan Racers Group or VSRG is made up of vintage race drivers, car owners, car builders and enthusiast working together to bring the excitement of Trans-Am 2.5 and B-Sedan cars to vintage racing. 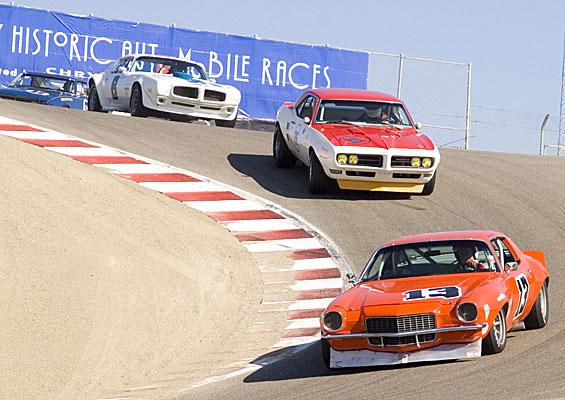 Evolution
Rules evolved over the years, incorporating FIA touring and grand-touring classes as well as SCCA Club Racing classes. The different classes had restrictions placed on the allowed modifications in an effort to equalize competition between the different cars. In 1976, Trans-Am returned to the two category format, classifying FIA Group 4 and 5 cars as "Category II".

The Modern Era (1980 - 2006)
In 1980, the SCCA developed a weight-to-displacement ratio for handicapping cars. Five-liter, 2600 pound vehicles dominated the field. Soon, tube-frame cars would begin to appear on the grid, eventually becoming the standard for Trans-Am competitors as they discovered the well-designed and relatively affordable circle track chassis being built in Ed Howe's Beaverton, Michigan shop also made an excellent road racing chassis.

In 1988, after years of rallying, Audi would enter the series with the 200 turbo quattro via the services of Bob Tullius's Group 44 Racing. As usual the car ran their trademark Quattro system. However this did not run without controversy as the car, piloted by Haywood and with both Walter Röhrl and Hans Joachim Stuck sharing duties, steamrollered the opposition taking eight out of thirteen wins. As Audi would defect to IMSA by the end of the season, the SCCA would change the regulation to a two wheel drive only and banning cars with non American engines from taking part. The Historic Trans-am & IMSA Group is dedicated to the preservation of the cars that ran in the SCCA Trans-am series and the similar IMSA GTO class from 1980 until 1991. The variety of cars in these classes ran the gamut from turbo charged 4 cylinder Merkurs to Corvettes with 358 cu in. V-8’s.

In the nineties Tommy Kendall, in a Ford, was the driver to beat- he would take four driver's championships in this decade. Chevrolet was also prominent in this time period, with 6 drivers' champions in their cars.

Paul Gentilozzi rose to the fore beginning in 1998 with his first championship in Trans-Am. He would win four more championships, his latest in 2006, driving a Chevrolet, Ford, and Jaguar. These latter years also saw more marques enter the field, with exotics such as the Panoz Esperante, Qvale Mangusta and Jaguar XKR. Later in the 2004 season, a Rocketsports Racing Jaguar XKR raced with a production-based 4.5 liter 650 hp DOHC AJ-V8. A 2006 season seemed unlikely until late in the year when a short two race season was run with both races taking place at Heartland Park Topeka. Fields were shored up by a makeshift assortment of SCCA GT-1 class amateur racers in town for the National Championship Runoffs later that week.

note: 1966 through 1970 and 2006 championships were not official SCCA driver champions

You need to be a member of Trans-Am Group to add comments!

The invited guest speaker and Grand Marshal at the RMVR Trans Am Invitational event will be John Morton, Trans Am Champion who drove the Datsun 510 for BRE. The 2.5 liter Trans Am series sedans will be the featured marquee for this event.

Comment by Jess Neal on February 22, 2010 at 10:58pm
Thanks for the info, I'll have to find that issue. What I am most interested in is the true engineering construction of the car. I have seen many articles about the Cudas but they only give a brief basic look at what was changed. I've heard stories that there are blue prints and books of notes but don't know if that is true. Thanks, Jess Neal

Comment by Mike on February 22, 2010 at 7:47am
Jess Neel had asked earlier in this thread about information on the construction of Dan Gurney's AAR 'Cudas for the 1970 Trans-Am. In addition to the earlier sites I posted, I came across an article in the April, 1970 issue of Hot Rod magazine dealing with the cars' construction. It begins on page 66 of that issue and runs for three pages. There are pictures and some description of the build. Not much, but could help. - Mike

Comment by Mike Rogers on February 14, 2010 at 2:35pm
Rocky Mountain Vintage Racing has two great racing opportunities on the schedule for the 2010 racing season for Trans Am racers.

Rocky Mountain Vintage Racing is again commemorating the glory days of the Trans-American Sedan Racing Series on June 12-13, 2010 at Pueblo Motorsports Park, just south of the former Continental Divide Raceways.
The track is a 2.2-mile course with challenging elevation change, long straights, and a mix of corners including a high-speed Turn One. Passing is possible most everywhere on the track, making it great for Trans-Am racing. The elevation is 4,900 feet and requires re-jetting for those coming from lower elevations.

For more information, please see the event page at:
http://rmvr.com/category/transam/

The 88th edition of the world famous Pikes Peak International Hill Climb will be staged on June 27th, and another assault on the record books is in store for fans of the race.

Rocky Mountain Vintage Racing will be fielding a Vintage Division in 2010. The date has been moved up to accommodate the paving plan on the mountain. This will be the last year to race the upper mountain’s dirt course.

In 2009, six vintage division drivers added their names to the record books as hill climb rookies. Ten vintage autos ran including three Mustangs, three Falcons, a Corvette, an Oldsmobile Super 88, a Desoto Firedome 8 and a ‘71 Cuda and a new course record of 13:56 was set for the Vintage Division automobiles.

For more information, please see the event page at:
http://rmvr.com/2010-pikes-peak-international-hill-climb/ Comment by Mike on December 12, 2009 at 5:07am
Jess - There is a little information in a book called "Dan Gurney's Eagle Racing Cars" by John Zimmermann published by David Bull. I assume you have seen these websites on road racing 'Cuda's: http://users.erols.com/mathewg/mgcudat.html http://www.carcraft.com/featuredvehicles/116_0507_1968_plymouth_bar... http://www.rittich.ca/barracuda/ http://www.teamstarfish.com/ They don't deal so much with 1970's preparation as with current preparation. Take care Mike

Comment by Jess Neal on December 11, 2009 at 10:10pm
Hello, my name is Jess Neal. I own and road course race a '71 'Cuda. I'm interested in any info about the construction of the original '70 Chrysler Trans Am cars. Thanks for the help, Jess

Comment by Dale Mathers on June 17, 2009 at 12:50am
Hi Andy Boone, we need to get you and your TA Cuda down here next year(Jan/Feb) for the McLaren/F5000 Festival, all in the north island this time and 3 tracks to race on!!! Im back over for the Historics at Monterey, will you be there? Dale(NZL)

We are also looking for additional cars to compete in the Vintage Racing Group in the Pikes Peak International Hill Climb in July. Tech is on the 14th, followed by practice from the 13th thru the 17th, with the race to the clouds on the 19th. For more information on that event please visit the RMVR Hill Climb page.

Hope to see you soon!