The Phoenix Park - This is Dublin's playground and one of its most famous landmarks - the largest urban enclosed park in Europe,

- This is Dublin's playground and one of its most famous landmarks - the largest urban enclosed park in Europe, with a circumference of 11km (7m) and a total area of 712 hectares (1,760 acres). Situated 3km (2m) west of the City centre. Ornamental gardens, nature trails, and broad expanses of grassland, separated by avenues of trees, including oak, beech, pine, chestnut, and lime. Deer roam the forested areas, and horses romp on polo fields and once a year we turn this wonderful park into a MOTOR RACING CIRCUIT.

The rolling grasslands and clear roads of Phoenix Park have long been a draw for sports and sportspeople alike including running, cycling, polo, cricket, soccer and hurling.

From motor racing to cycling, polo, cricket, soccer and hurling, the wide expanses allow for a broad range of activities.

- The Phoenix Park is the largest enclosed Park in Europe and hosts almost 250 events annually.

Motor racing has taken place in the Phoenix Park since 1903, and during the period 1929 – 1931 the Park was the venue for the first ever Irish Grand Prix which led to the annual motor racing event that continues to this day.

The Motor Races were originally the model for Albert Park in Melbourne which also set up its own race meeting. Today, that meeting is the Australian Formula 1 Grand Prix.

During the 1990’s, a number of sponsors used the Phoenix Park Motor Races to promote their involvement in Formula 1, bringing World Champion Jacques Villeneuve to the circuit in 1996, and Damon Hill in 1997. The rich history of the Park has seen memorable racing by John Watson, Derek Daly, Eddie Jordan – all of whom became international names.

Motorsport Ireland, the governing body for motor sport in Ireland is involved in the organisation of this event in conjunction with the Phoenix Park Motor Racing Committee. This committee is made up of selected personnel from various motor racing clubs, with combined experience of 70 years of organisation of this prestigious event. The event is FREE to spectators and the revenue required to run the Park is generated through Competitor Entry Fees, Sponsorship and Corporate Hospitality.

Motorsport Ireland is fully conscious that the circuit, which consists of three public roads in the Phoenix Park, is not primarily there for motor racing. However, at the same time over the past 100 years the Phoenix Park has become synonymous with motor racing worldwide. Obviously, a major part of the budget required to run this event is the circuit build to the high standards of safety that are required.

The track is very suited to both historic racing cars and several of the modern racing classes. In order to attract both motorsport enthusiasts and general spectators, the 2009 event will have a mixture of historic and modern racing cars. Negotiations are taking place with several overseas classes that will be major attractions in 2009 – who knows – we may even have ‘The Stig’.

An event of this nature incurs a substantial amount of organisation and financial backing. The fact that it is also a free event to spectators makes matters more difficult. With this in mind, there are a number of excellent opportunities for potential sponsors and businesses who wish to promote their product(s) to a large audience. Some of these opportunities are outlined below.

The future of the Phoenix Park Races -

You need to be a member of The Phoenix Park Motor Races to add comments!

Comment by Neil Kavanagh on August 10, 2009 at 9:55am
Wish the weekend went as well for me! Had clutch problems in practice and...well...i'll let the video explain!
Click here

Comment by Eamonn Harte on August 10, 2009 at 9:19am
I took that corner sideways every lap. You'd think I was doing it on purpose but I always missed my braking point. If you think that the track is bumpy try driving on the grass.
The Park Races are most peoples first experience of motorsport so you have to put on a show.

Comment by Conor O'Brien on August 10, 2009 at 7:16am
Holding you off for a while. A great weekends racing and kept out of trouble also. 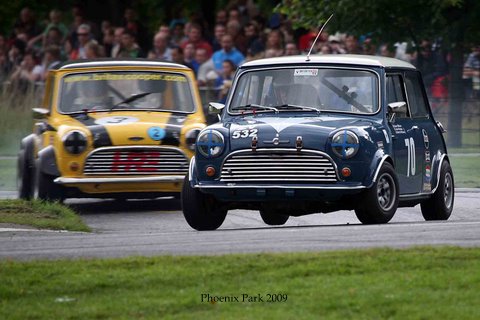 Comment by Eamonn Harte on August 10, 2009 at 5:30am
I'm still buzzing from a great weekends racing in The Park. During the first race I got caught up in the incident at turn one but survived entact to finish sixth. I had a fantastic battle with Paul O'Connell in the Avenger for most of the race and I was delighted to see the chequered flag. He managed to keep me behind him in the second race. It started to rain towards the end and I thought that if it keeps up I might catch him but I was the one that overcooked it coming back onto the straight and ended up taking to the grass. I tried to slow down but my right foot refused to listen. Mark Byrne had a fantastic weekend in his Mini and had no problems keeping up with the bigger engined guys. I imagine YouTube will be full of incar footage before too long. Thanks to everyone at the Park and it was marvelous the see the support from the crowds lining the circuit.

Comment by Conor O'Brien on August 4, 2009 at 3:07pm
Thanks Neil, lets hope that it will help publicize this weekend. See you on Friday

Comment by Neil Kavanagh on May 28, 2009 at 3:19am
Really looking forward to this event as it will be my first year competing at Phoenix Park. As a child, I was brought by my father religiously every year to watch so it holds a special place in my heart!

It has all the makings of an amazing event but there is still a lot of room for improvement. A proper pitlane and a few stands for spectators would go along way to making the event more attractive to both competitors and spectators. The event needs publicity more than anything however - publicity equals more spectators, more spectators means more attractive to sponsors, more sponsors means more money and more money equals a better event! Contra deals could be formed with newspapers, magazines, radio stations etc so the publicity may not even cost anything, and entrance gates to the event could be set up which would allow for the number of spectators to be calculated.

It may also be worth reviewing the track layout perhaps? It doesn't seem to be the most exciting formation! I could be wrong however as I've never driven the track.

Comment by Conor O'Brien on May 22, 2009 at 4:28pm
I agree with you Eamonn, the park has huge potential. In my view the different series who race in the park should not expect to have 2 races 1 each day. We should be content with 1 race and on the second day invited Classes from the UK and elsewhere should be invited to participate. We need to have some endurance races of 45 minutes 2 driver races as they do in the UK. I agree we do need a suitable pit area behind some Armco that can be taken up after the event. We need much more publicity before the event with a drive through Dublin by selected cars a few weeks before to publicize it. The other potential is that OPW could stage one of their concerts during the same weekend and part of the proceeds go towards the Races to help as we cannot charge entry to spectators. I am delighted to see that the Government have given the Car park at Farmleigh to us for this year so that we do not have to mud plugging as we did last time. Things do appear to be moving in the right direction and any help that we can give to the organizers I know will be gratefully received.
Keep the comments coming and suggestions. I know that Members of Motorsport Ireland do look at this site and useful suggestions and constructive criticism will be much appreciated.

Comment by Eamonn Harte on May 17, 2009 at 6:27pm
This event is a perfect opportunity to be used as a promotional tool for Dublin and Ireland. The problem is that the powers that be are blind to this. Properly funded this could be a major event in the racing calender for Irish and European racing classes. We should take heed to Monza in Italy and Albert Park in Australia. They run similar events, both in public parks.
If the track is upgraded with a proper surface and a proper pitlane area (can be returned back to a car parking area off season) we could have the makings of a great weekend of racing which could easily equal that of The Goodwood Festival.
One of the biggest problems is the public have no proper viewing area. They have to stand behind a barrier at least 20 metres away at track level. With the introduction of temporary stands which you could charge a nominal fee for to cover use, the viewing would be spectacular.