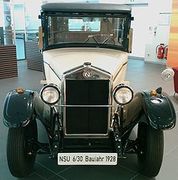 NSU began as a knitting machine manufacturer in the town of Riedlingen on the Danube in 1873, and moved to Neckarsulm, where the river Sulm flows into the river Neckar, in 1884. The company soon began to produce bicycles as well, and by 1892, bicycle manufacturing had completely replaced the knitting machine production. At about this time, the name NSU (from Neckar and Sulm) appeared as brand name.

In the early years of the 20th century NSU motorcycles were developed, in 1905 the first NSU cars appeared. In 1932 the car production in Heilbronn was sold to Fiat.

During World War II NSU designed and produced the famous Kettenkrad, NSU HK101 a half-tracked motorcycle with the engine of the Opel Olympia.

After the war, NSU restarted in a completely destroyed plant with pre-war constructions like the Quick, OSL and Konsul motorbikes. And also still the HK101 could be purchased at NSU as an all terrain vehicle in a civil version. The first post war construction was the NSU Fox in 1949, available in a 2-stroke and a 4-stroke version. In 1953 the famous NSU Max followed, a 250 cc motorbike with a unique overhead camdrive with connecting rods. All these new models had a very innovative monocoque frame of pressed steel and a central rear suspension unit. Albert Roder, the genius chief engineer behind the success story, made it possible that in 1955 NSU became the biggest motorcycle producer in the world. NSU also holds 4 world records for speed: 1951, 1953, 1954 and 1955. In 1956 Wilhelm Herz started at the Bonneville Salt Flats, Utah. Herz was the first man to ride a motorcycle faster than 200 miles per hour, in August 1956.

In 1957 NSU re-entered the car market with the new NSU Prinz, a small car with a doubled NSU Max engine, an air cooled two-cylinder engine of 600 cc and 20 hp. Motorbike production continued until 1968.

In 1964 NSU offered the first Wankel engine car of the world: the NSU Wankelspider. In the same year Prinz 1000 and derivates like the TT and TT/S followed. As a family car the Typ 110 (later 1200SC called) was launched in 1965 with a more spacious body design. The last NSU cars with a conventional 4 - stroke engine had the air cooled OHC four cylinder engine in common.

In 1967 the sensational 2 rotor 115hp NSU Ro 80 was presented to public and soon gained several design awards like "car of the year 1967". Despite its public acclaim, sales of the Ro 80 were disappointing.

You need to be a member of NSU Motorenwerke AG Owners Group to add comments!

OK, one more member!  Duncan Charlton here, from central Texas.  I will be collecting a 1967 NSU 1200TT race car in August (2014) to race in CVAR.  This car was raced by Gordon Kelly, Terry Mendini and Jack Bowling.