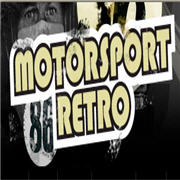 Motorsport Retro.com is an online publication celebrating classic motorsport. It’s about the classic machines, events, design, riders and drivers of the 1960s, 1970s and 1980s. Contact Richard Fowler at: rich@motorsportretro.com

Motorsport Retro.com is an online publication celebrating classic motorsport. It’s about the classic machines, events, design, riders and drivers of the 1960s, 1970s and 1980s.

The site was launched in 2008 by Richard Fowler from Sydney, Australia.

Everything on the site is here because we love it. We are all infected by the motorsport disease. Petrol runs in our blood. We love the sounds, the smell, the speed. We share a passion for those special motorsport moments, the glorious hand built cars and bikes and the gutsy riders and drivers that defined a heady period in motorsport history.

Henry Hope-Frost
If it moves and makes a noise, it gets my vote. That just about sums up my lifelong, all-encompassing passion for motorsport and its history. With a former BMC engineer and amateur racer/rally driver for a father it’s hardly a surprise. In fact, my great grandparents were regular visitors to Brooklands, so the seeds of my interest were sown long ago. School was a waste of time – as long as I could devour Autosport each week, I was happy. That the world’s oldest and best-known motorsporting weekly became my vocation – and remains so – is particularly poignant. Growing up in a house once occupied by original magazine benefactor and Connaught Grand Prix driver Dennis Poore seemed to help!

For the past 16 years I have been fortunate to contribute to many leading print and on-line media, and to join the television, radio and public address broadcast/commentary teams at international and national race and rally events around the world.

Richard Fowler
I was born into a motorsport loving family! I have been racing since I was four-years old, competing in motocross, gymkhana, trials and enduro on bikes and raced cars including a race winning stint in the Australian Formula Ford Championship, right though to rallying a classic Porsche 911 in the Targa Tasmania. I have a passion for riding, driving and everything motorsport related. I can’t get enough of it. I have worked at numerous motoring titles including Autosport in the United Kingdom and Auto Action, Motor and Australian Motorcycle News in Australia.
rich@motorsportretro.com

Darryl Flack
Like Rich, I was born into a motorsport family! I’ve been riding bikes since 1974, and saw my first road race in the same year, featuring Gregg Hansford and Warren Willing on Yamaha TZ700s. All that inspired me to become involved in bikes, and I have been a motorcycle journalist for 20 years, writing for magazines in Australia, Britain, the US and Europe. I was also the Australian correspondent for the official MotoGP website, and when Rich offered me the opportunity to write for Motorsport Retro.com , I jumped at the chance.

Ray Fowler
When I was a school kid in the late ‘40s growing up in the little town of Narrabri, New South Wales, I saved up to buy the English ‘Motor’ and ‘Autocar’ magazines. I even spent 5 GBPs (that was a lot of money then!) to buy a membership in the BRM Supporters’ Club. When I came to Sydney to study, I went to every motor race event I could. This always meant going by public transport and walking to the track, and sometimes sleeping in strange places. I went to Parramatta Park, and saw Stan Jones and the Maybach, and then Jack Brabham in the Cooper Bristol at Gnoo Blas near Orange. I ventured to Warwick Farm to watch Stirling Moss and Piers Courage, and saw races at Mt Druitt and Bathurst. In those days, there were lots of home-made specials mixing it with the classic cars of Europe. Later, my motorsport embraced whatever my sons were doing. We did the small-bore bikes and then Formula Ford. In the ‘90s, the first Porsche arrived and I have since had two others. The current 911 is a supercharged 3.0 litre. I’ve been the Editor of the Porsche Club NSW’s magazine Porsche Power for 12 years, and I have always had a passion for the history of this great sport.

You need to be a member of Motorsport Retro Group to add comments!