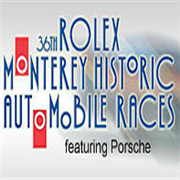 
The History of the Monterey Historic Automobile Races
It all began in the same year that included the Watergate hearings and the Patty Hearst debacle. During August 1974, a week after Gerald Ford was sworn in as president, there was a gathering of race cars and enthusiasts on the Monterey Peninsula. It was a pleasant day at Laguna Seca Raceway for the entrants who brought out 70 pieces of machinery dating from the 1920s up to late-model Ferraris.

David Love and his 1958 Ferrari 250 Testa Rossa has participated in all 35 Monterey Historics.This first-time gathering attained little notice in the outside world, but the following word of mouth lit a slow-burning fuse. It's doubtful that back then Steven J. Earle had any idea what the future would hold.

Steve Earle treated that first event as if it had been around for years and, from a historical sense, it had always existed in some form or another: the afternoon get-togethers at someone’s shop or house; the car club functions; impromptu rallies and drives. But no one had truly mixed it all up, brought it out into the open and offered it to the public. Earle’s optimism was on display by virtue of the title on the program: The 1st Annual Monterey Historic Automobile Races.

Piero Ferrari and his son Enzo, Mr. Ferrari’s grandson, are about to take a lap in LouSellyei Jr.’s 1958 250 Testa Rossa in 1994. General Racing's Steve Earle points the way.While Roberta Flack was Killing Us Softly and rocker Patti Smith was belting out Because the Night, David Love was showing off his 1958 Ferrari 250 Testa Rossa in 1974, and has participated in all 35 Monterey Historics since.

The last paragraph of the inaugural program thirty-six years ago pointed to the future that is now: “We are slightly overwhelmed with the great turnout of the cars for this first event. But just think what this event can be in the future. Many more of these great cars are ready to come back, and this can be the first of many marvelous times. By being here today, you are going to bring them back.”

Fast forward to another great moment at Monterey, while OJ's slowly driving his white Bronco up the 405 Freeway and Whitney Houston is bleating that she Will Always Love You, the Ferrari's, both car and people, are about to take a turn around the track.

For a wonderful overview of the 35 Year History of this great event, see:
http://www.montereyhistoric.com/attachments/176_Event_Info_History_35story.pdf

You need to be a member of Monterey Historics Group to add comments!