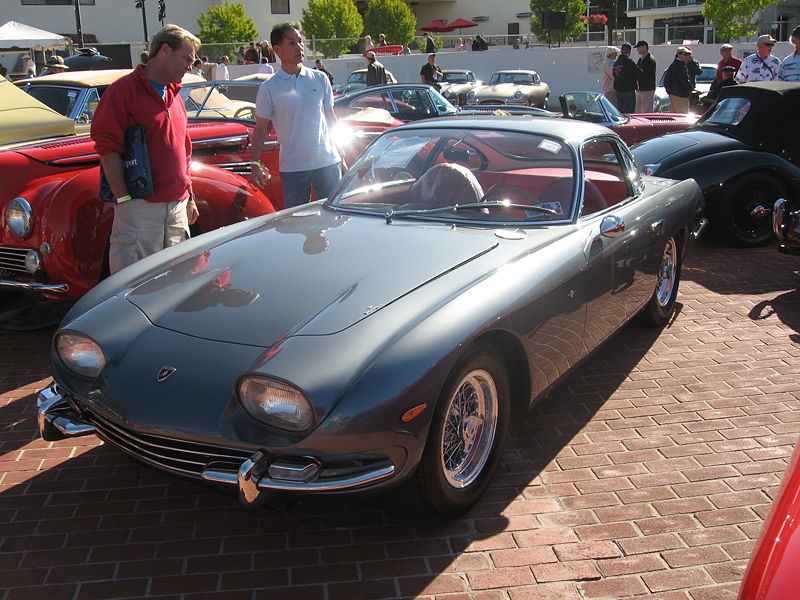 Automobili Lamborghini S.p.A., commonly referred to as Lamborghini, is an Italian manufacturer of sports cars, based in the small Italian village of Sant'Agata Bolognese, near Bologna. The company was founded in 1963 by businessman Ferruccio Lamborghini, who owned a successful tractor factory, Lamborghini Trattori S.p.A.. Origin
Founded by Ferruccio Lamborghini, Lamborghini started out as a tractor building company in the Italian village of Sant'Agata Bolognese. However, Ferruccio Lamborghini's priorities changed when he went to meet Enzo Ferrari at the Ferrari factory to complain about the quality of the clutch in his Ferrari 250. 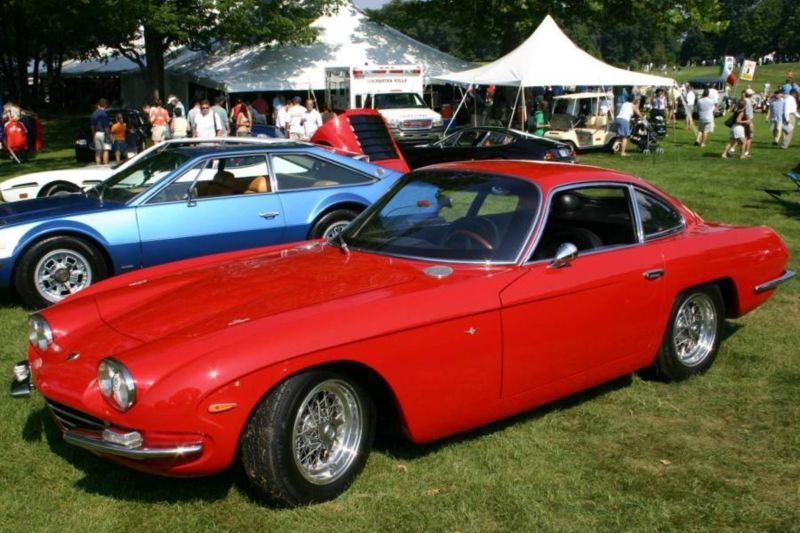 Under Ferruccio Lamborghini
Lamborghini 400GTThe 350GT was followed by the 400GT. Profits from the 400GT and its predecessor gave the company ample capital to design its first sports car, the Lamborghini Miura. The chassis of the new Miura was introduced by Ferruccio himself at the November 1965 Turin Auto Show. The car's engine was transversely mounted. The styling was executed by Marcello Gandini in less than a year. The completed car was displayed at the March 1966 Geneva Auto Show. The car's name was taken from the famed fighting-bull trainer, Don Eduardo Miura. One hundred and eleven Miuras were sold in 1967. Seven hundred and sixty-one were made in total. The Miura propelled the company into the small world of exotic car manufacturers. 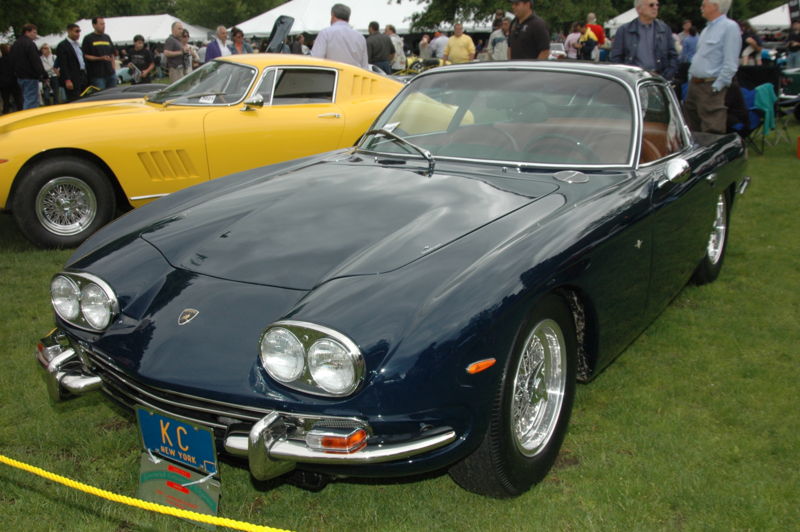 The Espada, a four-seat car based on the Marzal concept car, was developed alongside of the Miura. The name Espada means sword in Spanish, and referred to the sword used by the matador in bullfighting. Using the 4-litre V12 in a conventional front engine layout, the low-slung touring car could attain a top speed of approximately 150 mph (240 km/h). An interesting feature of the Espada was a glass taillight panel that used the same taillights as the contemporary Fiat 124 Coupé. The Espada received minor improvements over its production, resulting in three distinct series.

Lamborghini tractorIn 1971, Lamborghini produced the LP500 Countach prototype. The Countach was named after an Italian dialect term uttered in surprise by Nuccio Bertone upon seeing the car for the first time. The production LP400 Countach was introduced three years later. The prototype was the first car to sport Lamborghini's now-traditional scissor doors, along with vertically mounted rear air intakes. The Countach's V12 engine initially had the same 4-litre capacity as the Miura, but this was enlarged to five litres upon the introduction of the LP500S Countach in 1982. The Countach was one of the first cars to use the Pirelli "P-Zero" tires. Lamborghini's test driver would often demonstrate the Countach's abilities to journalists. A detail noted by journalists was the manner in which a Countach was reversed; the driver would raise the door and sit on the door sill. 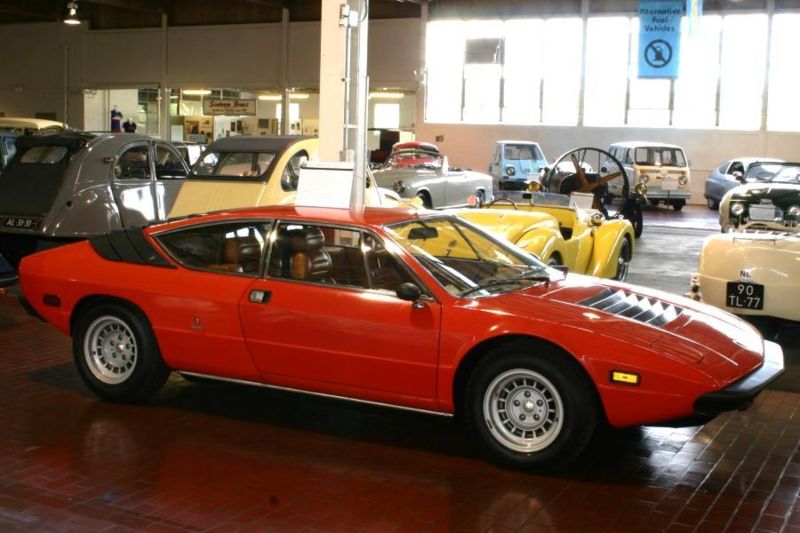 The company suffered a major setback in 1972 when a massive tractor order from a South American nation was canceled. In preparation of the order, Lamborghini had made upgrades to its factories to accommodate the increase in demand. Financial complications forced Ferruccio to sell part of his share of the tractor factory to Fiat. The tractor business was eventually acquired by SAME (now Same Deutz-Fahr). Lamborghini tractors are still sold today, as part of the SAME Deutz-Fahr Group. 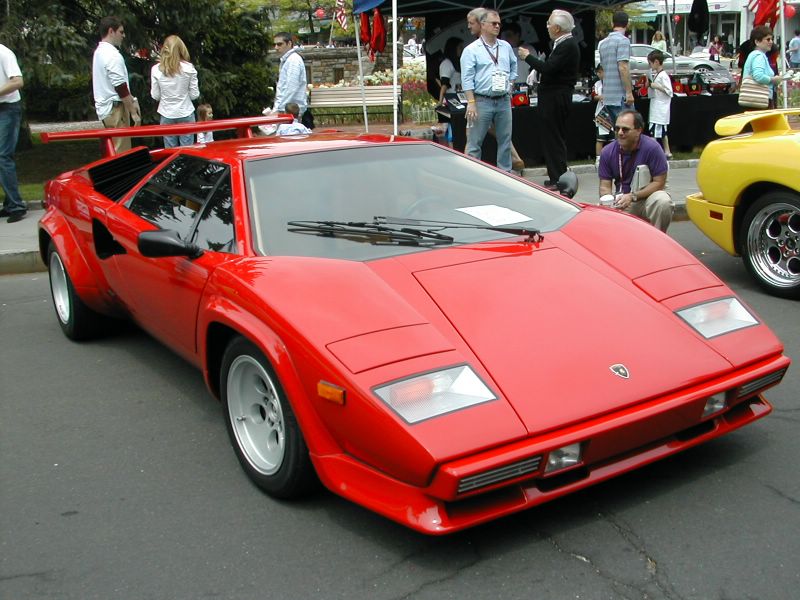 Eventually, the automobile division became self-sufficient and profitable. Lamborghini, however, sold all his remaining stock in the company to a Swiss investor and left the automotive industry. 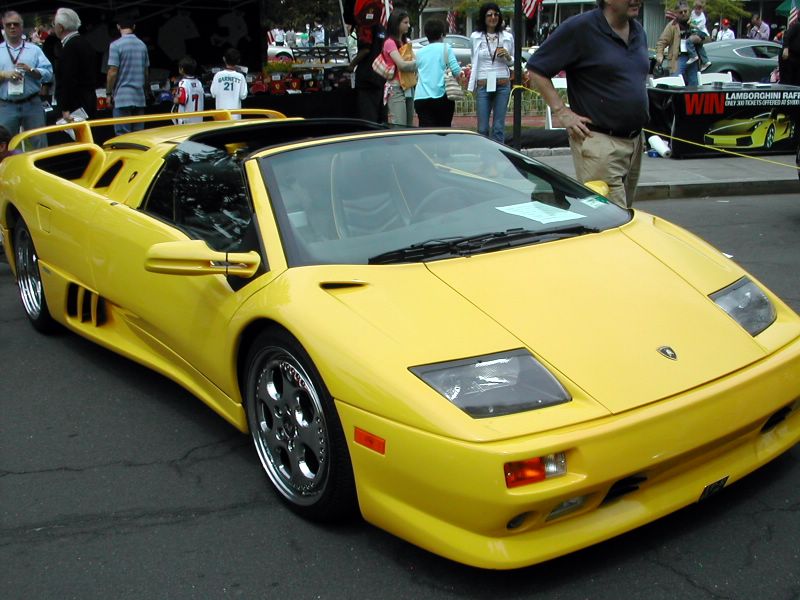 The 1970s oil crisis plagued sales of high performance cars. In 1978, Lamborghini declared bankruptcy. An Italian court was appointed to find a buyer, and the Swiss-based Mimran brothers took over the company in 1984, after managing the company for four years while it was in receivership. The company remained solvent under Mimran's control, selling the Countach, the Jalpa, and the LM002 during this time.

In a surprise move, the company was bought by the Chrysler Corporation in 1987 with the acquisition being driven by Lee Iacocca, Chrysler's chairman at the time. Lamborghini was then working on the Countach's successor, the Diablo. The basic design of the Diablo was by Marcello Gandini, who designed the Miura and the Countach while at Bertone. The design was further developed by Chrysler, which brought its resources, including design input, pollution controls, and new manufacturing techniques, into this development. Chrysler's experience with the design of mass market vehicles improved areas of practicality and comfort that had been neglected earlier, including noise, vibration, and harshness (NVH), engineering, and ergonomics.

Post-Chrysler: Megatech and Audi
In January 1994, poor economic circumstances and the political climate at Chrysler forced them to sell[citation needed] Lamborghini to Megatech, an Indonesian investment group headed by Tommy Suharto, the youngest son of Indonesian President Suharto. A new management team was installed at the company headquarters headed by ex-Lotus Group Chief Executive, Mike Kimberley and including ex-McLaren Cars head of sales, Nigel Gordon-Stewart who became International Sales and Marketing Director. Kimberley was, at the time, the only candidate acceptable to Chrysler as the new President of Lamborghini under the Megatech ownership as he was well known to senior Chrysler management from his previous senior roles at Lotus and General Motors. 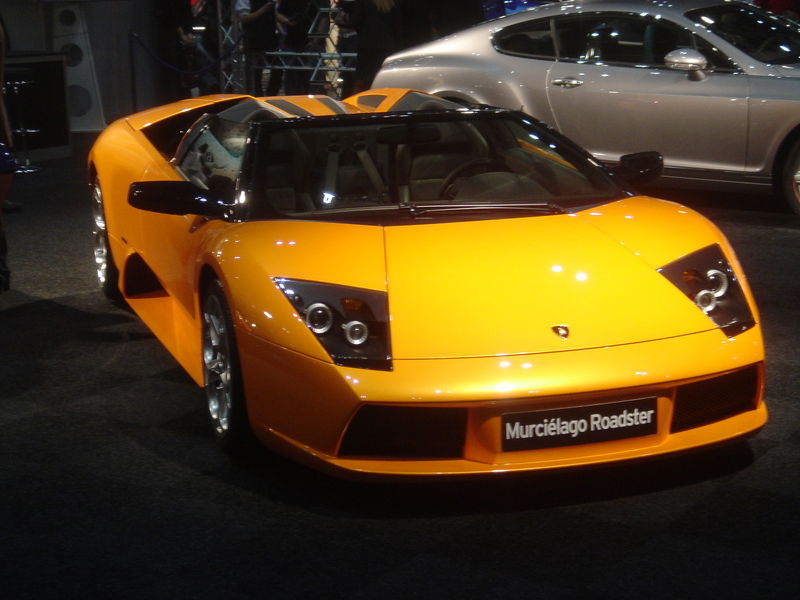 Under the new management, Lamborghini began a renaissance in the world markets, with a complete revision of its international dealer network and the implementation of highly proactive marketing strategies. Sales increased from 101 in 1993 to 301 in 1994 and 414 in 1995. Large stocks of cars held by the dealers were sold through aggressive marketing programmes and new models introduced to create a shortage of product in the market reinforcing the exclusive image and premium value of Lamborghini product. 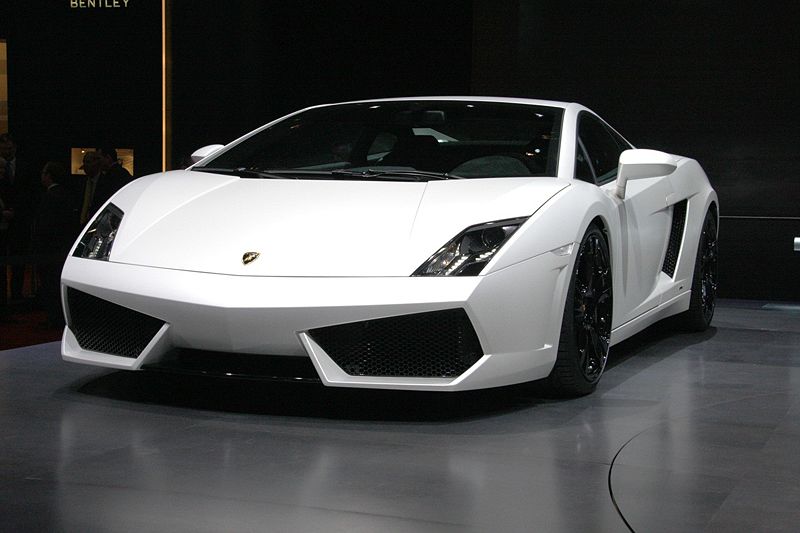 The Lamborghini Diablo SVR was also introduced in 1996 and used to compete in the one-make racing series developed by Stephane Rattel and sponsored by Lease Plan. 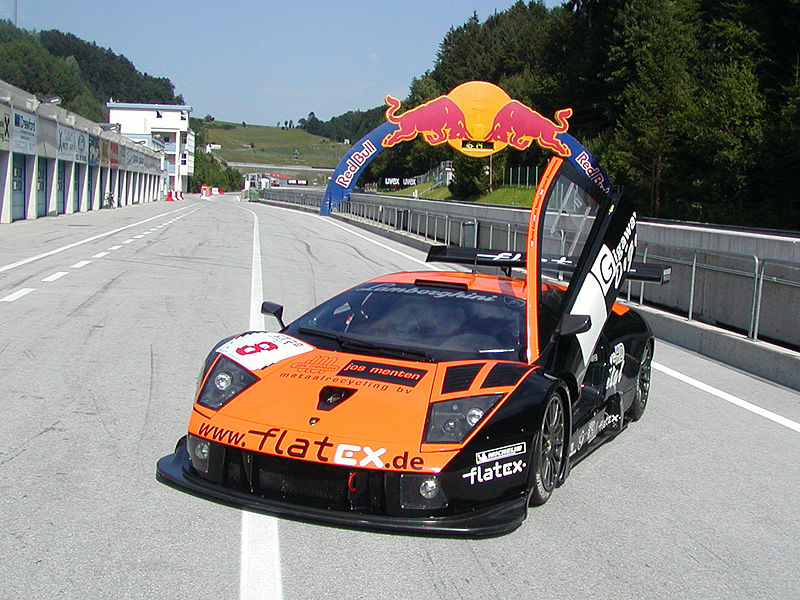 Megatech sold the company in 1997 as a result of changing circumstances in Indonesia and therefore an inability to fund the future business plan produced by Kimberley's team.

Lamborghini was bought by Audi AG, who had gained interest in the Italian company after being one of several major manufacturers approached as possible technical suppliers for major components for future Lamborghini models. After a complex series of transactions, Audi AG became the sole owner of Automobili Lamborghini. 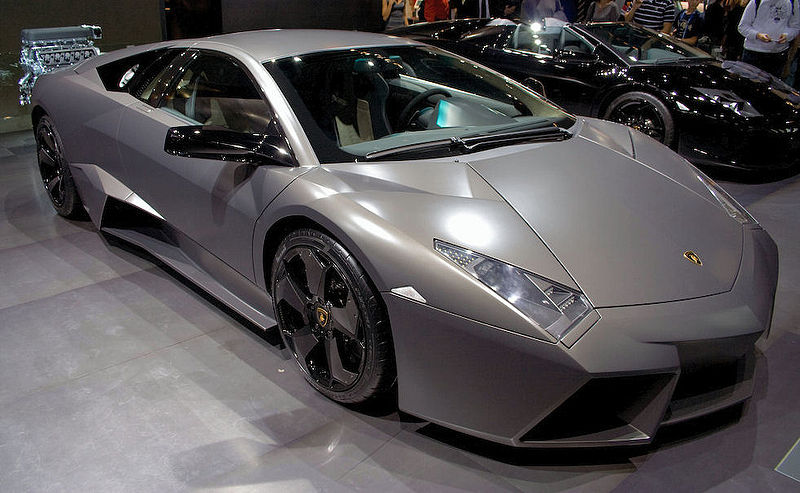 Lamborghini Showroom displayLamborghini's latest owner once again greatly influenced the design of its cars, including the Murcielago. Audi's vast technical resources helped produce one of Lamborghini's most sophisticated cars to date.

Lamborghini of Latin America
Jorge Antonio Fernández García set up his company, Automóviles Lamborghini Latinoamérica (based in Buenos Aires, Argentina), in 1994, with special permission granted by Automobili Lamborghini, then under the ownership of Megatech. The first cars, called the Eros GT-1 and the Coatl, were presented in 2000. These were hand-made Diablo-based special sportscars, and from 2003 they are offered for sale only in South America.

Since 2003, Automóviles Lamborghini Latinoamérica have not built any cars. In 2003, they asked the Argentinian Government to invest in the company, but their request was not granted.

Badge Licensing
The Lamborghini badge with its connotations of exotic motoring, has been licensed for use on unrelated products such as mountain bikes, watches, cigar lighters, humidors, sunglasses, coffee machines and notebook computers.

The current head of design for Audi and Lamborghini is Wolfgang Egger. 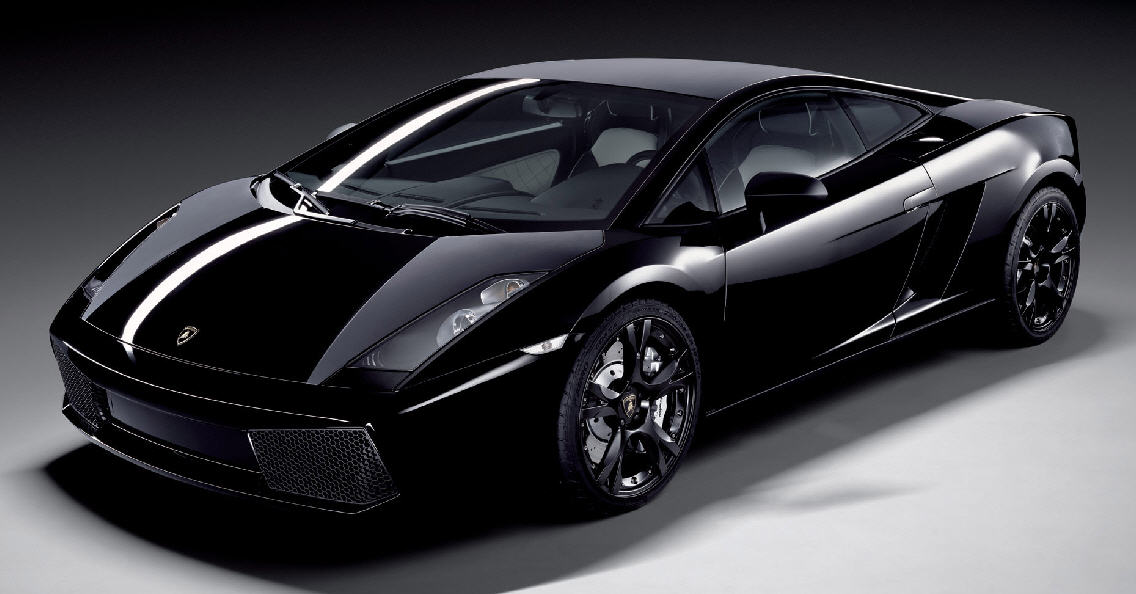 Future models may include a rear-wheel-drive version of the Gallardo, and possibly an SUV in the spirit of the LM002. At the 2008 Paris Motor Show Lamborghini revealed the Estoque Concept - a four door sedan.

Racing Models
Ferruccio Lamborghini had set a rule that Lamborghini would not be involved in motor racing. He saw such a program as too expensive and too demanding in company resources.[citation needed] Consequently, no Lamborghini racing car was fabricated under his management. The closest the company came to building racing cars at that time was when the company's test driver Bob Wallace made a few highly modified prototypes based on existing models. Notable among these are the Miura SV based Jota and the Jarama S based Bob Wallace Special.

Under the management of Rosetti, Lamborghini entered into an agreement with BMW to build a production racing car in sufficient quantity for homologation. However, Lamborghini found itself unable to fulfill their part of the agreement. The car was eventually developed in-house by the BMW Motorsport Division, and was manufactured and sold as the BMW M1.

Lamborghini developed the QVX for the 1986 Group C championship season. One car was built, but lack of sponsorship caused it to miss the season. The QVX competed in only one race, the non-championship 1986 Southern Suns 500 km race at Kyalami in South Africa, driven by Tiff Needell. Despite the car finishing better than it started, sponsorship could not be found and the program was cancelled.

Lamborghini was an engine supplier in Formula One between the 1989 and 1993 Formula One seasons. It supplied engines to Larrousse, Ligier, Lotus, Minardi, and to a 'Lamborghini' team, although this last was not viewed as a works team by the car company. The 1992 Larrousse/Lamborghini was largely uncompetitive but noteworthy in its tendency to spew oil from its exhaust system. Cars following closely behind the Larrousse were commonly colored yellowish-brown by the end of the race.

Late in 1991, a Lamborghini Formula One motor would be used in the Konrad KM-011 Group C sports car, but the car would only last a few races before the project was canceled. The same engine, badged as a Chrysler, by Lamborghini's then parent company, was tested by McLaren towards the end of the 1993 season, with a view to its use during the 1994 season. Although driver Ayrton Senna was reportedly impressed with the engine's performance, McLaren pulled out of negotiations, choosing a Peugeot engine instead, and Chrysler ended the project.

Two racing versions of the Diablo were built for the Diablo Supertrophy, a single-model racing series held annually from 1996 to 1999. In the first year, the model used in the series was the Diablo SVR, while the Diablo 6.0 GTR was used for the remaining three years.

A GT3 version of the Gallardo has been developed by Reiter Engineering.

Marine Engines
Lamborghini have for some years produced a larger V12 marine engine block for use in powerboat racing, notably the World Offshore Series Class 1. This engine is produced with a typical displacement of around 8500cc/510ci with an output of around 950 hp (710 kW).

You need to be a member of Lamborghini Owners Group to add comments!

Comment by Bernard Martin on June 23, 2011 at 11:20am
Just wanted to drop a quick note to Lamborghini Group members that we added and event that here on the VRL that is focused on Lamborghini. You are INVITED! >> PVGP Cortile Lamborghini Proiettore Macchina 2011

Comment by Cindy Meitle on July 20, 2009 at 2:50am
We've got dozens of BEAUTIFUL Lamborghinis exhibiting at La Dolce Vita Automobili at Black Horse on Friday, August 14 of Monterey Car Week. I hope you will also display your car and if you are not bringing a car, please come as a spectator and say hello to fellow Lamborghini enthusiasts. Sponsored by Cat's Exotics and Driven Exotics, Lamborghini will surely dominate our show! www.ladolcevitamontereybay.com 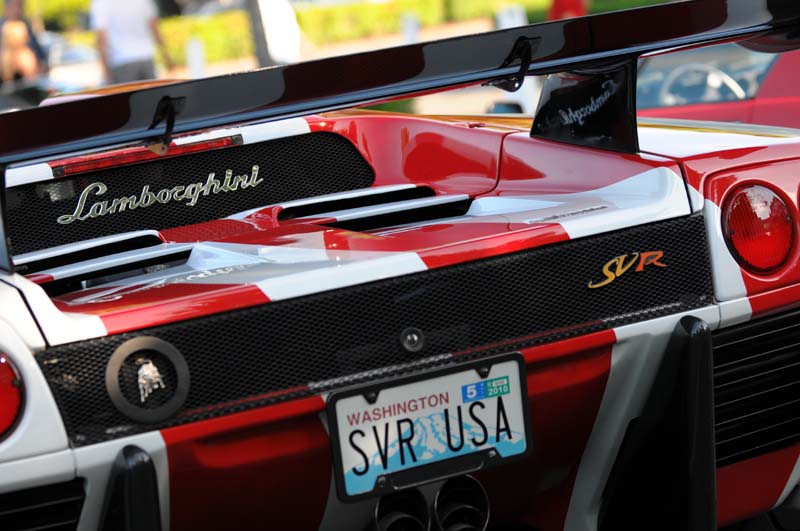