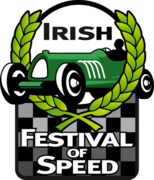 This group does not have any discussions yet.

You need to be a member of Irish Festival of Speed to add comments!

Comment by Conor O'Brien on June 4, 2013 at 5:36
The 1936 ERA's of Prince Bira and Peter Whitehead to Race again in Limerick, 77 years after they last raced in The 1936 Limerick Grand Prix.
The 2 cars, owned by two Irishmen, Charles McCabe and Paddins Dowling, who live in San Francisco, have agreed to compete in the 2013 Irish Festival of Speed at the IFS Circuit at Limerick Racecourse 2nd to 4th August 2013.

Thanks Conor,  I'll watch from afar!

Comment by Stephen Page on April 18, 2013 at 7:24
Well done Conor!
Glad to see that you survived Winter.
I'll feature the event in our Newsletter.
What else can we do to help ?
All the best - Stephen

It's bigger and it's more spectacular, It's a 2 day Event with a new 5 Star Venue located at Greenmount Raceway, Limerick - It's the Irish Festival of Speed 2013 on August 3rd &. 4th 2013

Following on from the very successful inaugural 2011 Irish Festival of Speed at Adare Manor, the 2013 IFS event is planned to be the biggest 5 star Motorsport event being within the island of Ireland.

With a new location at Greenmount Raceway and with a purpose built race track and two further tracks for Demonstration and Rally/Motorcycle events the venue provides the Irish Festival of Speed with a permanent home into the future where it will allow for the development of the IFS event into one of the key European Motorsport events over the next number of years.

The Irish Festival of Speed idea is the brainchild of a group of  motorsport and motoring enthusiasts who wished to bring a “Goodwood style” Festival of Speed to Ireland. In addition it is also commemorating the rich racing heritage of the region and  in particular the Limerick World Grands Prix of 1935, 1936 and 1938 which took place around the City streets of Limerick and which with Monaco remains today as the only two remaining City street Grands Prix routes, which are still in existence.

The Irish Festival of Speed is delighted to announce that Porsche Centre Dublin have agreed to be the Lead Sponsor for 2013 and will in conjunction with The Porsche Club of Ireland provide a spectacular display to celebrate the 50th Anniversary of the Porsche 911.

In addition to the large number of 5 star events taking place at the Greenmount Raceway, there will be a number of very high profile events on the Saturday evening 3rd August  in Limerick City.

This will include a Supercars Expo at Limerick Potato Market where followers and spectators can view these magnificent masterpieces of power and class up close and meet their owners.

Following this expo the Supercars will perform a demonstration parade through a route along the main streets of Limerick.

While all this activity is taking place there will be a major display on the River Shannon involving Formula 1 Speed boats and the super ZapKats and there will also be motorcycle stunt displays in Arthur's Quay by the world renowned Stunt  motorcyclist Mattie Griffin.

The evening will conclude with the IFS BBQ at the Limerick Milk Market with live Hillbilly music concluding the 1st day of events.

It is planned to incorporate a range of other festival style activities over the IFS weekend in Limerick City and Adare, which will include Shopping, Public house and Hotel entertainment.

The Irish Festival of Speed Organisers have a key objective in ensuring that this is a 5 Star Motorsport event that is a uniquely Irish and an International event and in doing so will maintain all standards to a level in achieving this objective.