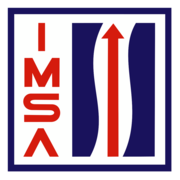 IMSA, the International Motor Sports Association, has a long history as the premier sanctioning body for sports car competition in North America.

The sanctioning body was founded in 1969 by John Bishop with the assistance of NASCAR President Bill France Sr. Bishop was a 12-year employee of the Sports Car Club of America, who elected to follow his own vision for professional road racing. Bishop and his wife, Peggy, brought a family-style feel to the organization, based in Bridgeport, Conn.

The first IMSA-sanctioned race was at Pocono International Raceway in Oct., 1969, a Formula Ford and Formula Vee event that paid $3,000 and attracted 348 spectators. Bishop abandoned his plans for open-wheel competition by the end of 1970, concentrating on forming a six-race series in 1971 for FIA Group 2 and Group 4 sports cars, along with “Baby Grand” stock cars.

That series became the IMSA GT Series.The R.J. Reynolds Tobacco Company began sponsoring what became Camel GT in 1972, and the series quickly gained in popularity. Bishop’s vision of adding prototype sports cars in the early 1980s proved to be a huge success, and the series thrived throughout the 1980s with many of the top names in U.S. and international sports cars battling on North America’s top road circuits in Porsche, Jaguar, Ford, Nissan, Chevrolet and Toyota Camel GTP Prototypes.

Bishop sold the organization to Florida businessmen Mike Cone and Jeff Parker in 1989. The company was relocated to Tampa, Fla. With a sharp drop in participation in the GTP class due to a challenging economy, IMSA announced a shift to a revolutionary concept for 1994, introducing the World Sports Car, an open-cockpit prototype.

There were many additional changes for 1994. Florida businessman and GT racer Charlie Slater purchased IMSA. Exxon USA took over sponsorship of the series, which became the EXXON World Sports Car Championship, while GT competition took place in the EXXON Supreme GT Series.

In September 1996, the International Motor Sports Group – a conglomerate including Roberto Mueller and Andy Evans – purchased IMSA and changed its name to Professional SportsCar Racing for 1997.

Many changes took place over the following three years. The United States Road Racing Championship sanctioned races with the assistance of the Sports Car Club of America in 1998-99.

While originally affiliated with the USRRC, Don Panoz departed to hold the inaugural Petit Le Mans endurance race at Road Atlanta in 1998. He expanded that concept into a full series in 1999, the American Le Mans Series. He envisioned bringing European-style endurance sports car racing to America – highlighted by the 12 Hours of Sebring and Petit Le Mans. Panoz also acquired rights to IMSA, which became the sanctioning body for the organization.

IMSA's WeatherTech SportsCar Championship opens with a pair of historic events – the Rolex 24 At Daytona and Mobil 1 Twelve Hours of Sebring fueled by Fresh from Florida – building on the vision of John Bishop and Bill France Sr. from 45 years ago.

You may also send your inquiry to info@IMSA.com. Please specify in the subject of your email if your inquiry is related to the following:

You need to be a member of IMSA to add comments!