HEMMINGS MISSION STATEMENT
Hemmings Motor News will strive to enhance the experience of the collector-car enthusiast by publishing high-quality products while serving our readers and advertisers with excellence.
We will do this by creating a work environment that empowers, challenges
and rewards employees who share this commitment.

Hemmings Motor News was founded by Ernest Hemmings in Quincy, Illinois, in 1954. The first issue consisted of four pages, and 500 copies were sold at 50 cents per copy. Today, Hemmings has over 180,000 subscribers, paying $31.95 per one-year, 12-issue subscription. An additional 45,000 copies are sold each month at newsstands and bookstores throughout the United States for $6.00 per copy.

In the late 1960s, publisher, Terry Ehrich and his partners purchased the business and moved it to Ehrich's native Vermont. As the interest in car collecting and restoring grew in the 1970s and 1980s, Hemmings' ad pages grew along with it. In April 1989, a full-color advertising section was introduced for the benefit of those with exceptional cars for sale or with special auto-related products best shown in full color. 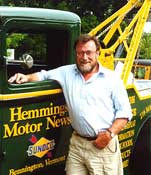 In 1970, Hemmings introduced a "companion" magazine, Special Interest Autos, to meet the growing needs of car-collecting enthusiasts. As the only publication in the car-collecting field which regularly road tested cars from the 1920s to the 1980s and accurately examined all aspects of their history and development, SIA entertained and informed its loyal following of automotive enthusiasts and historians while expanding its content to reach a broader audience.

In 1998, Hemmings Motor News joined the information superhighway, launching www.hemmings.com. Today it is the world's most comprehensive and informative web site of its kind, featuring over 30,000 searchable cars-for-sale ads, 10,000 Car Club listings, a viewer-generated online car show in the Readers' Rides section, a Dealer Showroom featuring collector-car inventories of over 130 classic car dealers coast to coast, and the opportunity to purchase all Hemmings' products via Hemmings online store.
Hemmings Motor News was acquired in April 2002 by American City Business Journals Inc. of Charlotte, NC, following the death of former publisher Terry Ehrich. Jim Menneto, the former publisher of ACBJ's Boston Business Journal, took over as publisher of Hemmings in May 2002.

In the fall of 2004, Hemmings launched yet another new and exciting automotive magazine, Hemmings Classic Car, which expands upon its legendary 34-year-old legacy as the old Special Interest Autos magazine, a publication that was considered to be the world's most definitive collector car magazine ever published. Hemmings Classic Car has built on that heritage, and devotes its editorial format entirely to American-built automobiles. Published monthly, it features contemporary road tests and in-depth automobile profiles, automotive design, engineering, styling and historical exposés, how-to restoration and technical articles, and profiles on specialists and shops specializing in the collector-car hobby.

Hemmings Sports & Exotic Car joined the lineup in September 2005. Each issue informs, educates and entertains its readers with everything there is to know about the world of Sports and Exotic Cars, from entry-level British roadsters to high-end German sports cars, sexy exotics from Italy, forgotten sports GTs from Japan, rally-inspired road cars from Sweden and distinctive designs from France.

Other unique Hemmings products include seven annual calendars. First published in 1991, the Abandoned Autos calendar is a one-of-a-kind, featuring abandoned collector cars throughout the country, all artfully photographed in scenic surroundings. The other calendars are Cars of the '50s, Vintage Pickup Trucks, Muscle Cars, Early Ford V-8s, Vermont Classics and Sports & Exotic Car. Each full-color calendar is jam-packed with significant automotive history dates and over 125 listings of car shows, swap meets and auctions.

Hemmings supports the collector-car hobby too, and in a big way, by attending more than 100 car shows and related automotive events each year throughout the country with its teams of field representatives. Specially designed trailers, lavishly illustrated with images of distinctive old cars, have become welcomed destinations for enthusiasts attending car shows from New England to the Northwest, from the Great Lakes Region to Florida, and hundreds of towns in between.

Hundreds of collector car hobbyists flock to Hemmings Motor News every summer to attend the Thursday night Cruise-ins, held in our parking lot, where hopefuls vie for trophies to add to their collections of prizes earned for their award-winning vehicles.

In 2005 and 2006, Hemmings Motor News was a major sponsor of the Great Race across America. HMN also participated in this event, driving a 1934 Dodge panel truck over 4,000 miles of winding back roads, even crossing the Rocky Mountains.

Today, Hemmings Motor News employs a staff of 100 people at its World Headquarters in Bennington, Vermont. This location, which is just 35 miles east of Albany, New York, is also home to our old-fashioned Sunoco filling station, Car Lover's store, and our vehicle display which features over 25 automotive legends from the past.

You need to be a member of Hemmings Motor News Group to add comments!