This group is for ALL Production Participants and fans of SHAKEN & STIRRED and the GT RACER TV-Series. (aka CLASSIC RACERS in the US)

Hello all GT Racers and Enthusiasts, Since a while I was thinking about how to create an online platform for all the participants of the creation of my TV series GT RACER (aka CLASSIC RACERS in the US) and its original pilot SHAKEN & STIRRED. After all we just finished the 11th episode in total. It gets hard to keep track. ("GT RACER, Season II" will air worldwide on Discovery HD as of March 2009, "Season I" and SHAKEN & STIRRED are out on DVD here: www.spiritlevelfilm.com)
During the course of the production I met so many wonderful people - naturally ALL vintage car enthusiasts - that where so incredibly helpful and supportive, that it is my desire to keep in touch with them all and to give them a chance to get in touch with each other (should they so desire) so that everybody can keep exchanging stories of the experience as well as continue to network.

And I received a lot of fan mail over the last year and a half, which makes me want to put those die-hard fans in touch with the participants of the show as well.

My greatest motivation to create GT RACER was the vibe that I experienced in the historic racing scene. The scene is just so open and welcoming and the racing experience is so tangible for ALL - including the spectators. The total opposite of modern racing. And it was that vibe that I wanted to bring across the screen, so to let more people know about it existence. This is why I chose the Cinéma Vérité style: To let the 'vibe' speak.

In retrospect I can confirm that this same openess and enthusiasm made the production a wonderfull experience. Yes, it is hard work shooting on a race track - but in the end so fulfilling. And the support all around was just unbelievable.

Then this morning (January 8th 2009) by pure luck I was invited by Stephen Page (with whom I just had a long chat) to join his historic car social network and by poking around I realized immediately this place can provide the platform that I am looking for. So thanks Stephen!

I hope that as many participants as possible of the GT RACER TV Series and the SHAKEN & STIRRED production will join - be it racers, car-owners, mechanics, truck drivers, event organizers or film crew members - so that they all can share their experience and give more insight about details and histories of the featured cars, the challenges of organizing events, anecdotes from the shown races and stories that did not make it into the final cut.

On the other hand fans may join to ask questions and to find out more about anything that might interest them.

The idea is to keep the same wonderful spirit that I found track-side and take it online with us in order to deepen our friendship and camaraderie for the sake of mutual enjoyment.

I know, only the fastest racers are here yet but I hope to see the whole field arriving real soon.

Here are more trailers from the new season:

Thanks for helping! Alexander 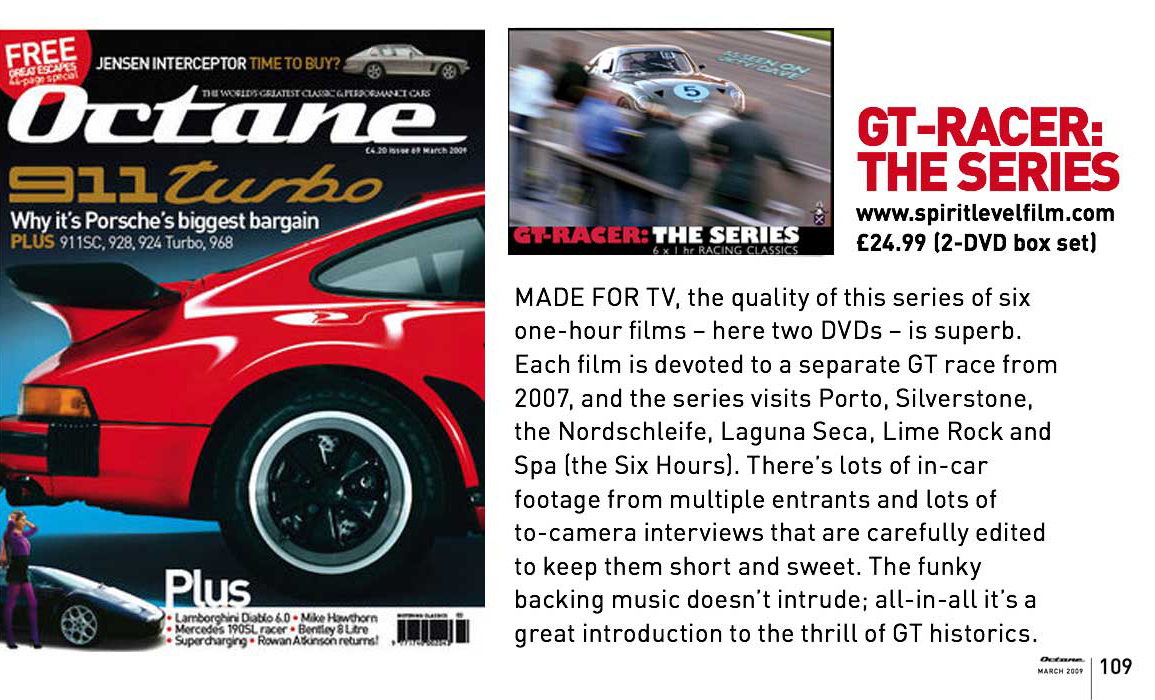 Some stills from Season 1, Legends of Lime Rock

You need to be a member of GT RACER Film Group to add comments!

Comment by Conor O'Brien on October 28, 2010 at 10:53am
Come on guys lets help Alexander Davidis / Galt Films get the Algarve Film published but he needs financial support by 7th November. See website: I am sure it will be even better than Shaken not Stirred and the GT Racer series published already.

Please pass this on to anyone you think would support this. Regards

Comment by Alexander Davidis on December 10, 2009 at 5:39pm
THAT is the link to your ultimate last minute Christmas present....
http://www.spiritlevelfilm.com/motoring-dvd/gt-racer-pack.html

Comment by Alexander Davidis on September 27, 2009 at 9:23am
As you can see "La Carrera Panamericana" and "Vintage Motorsport Magazin" have come in as Sponsors/Advertisers in the 11th hour and thus helped us to create a better product.
THANK YOU BOTH!

Thanks to them we where able to spend time effort and money on excellent DVD compression and a special feature to switch background music on and off! 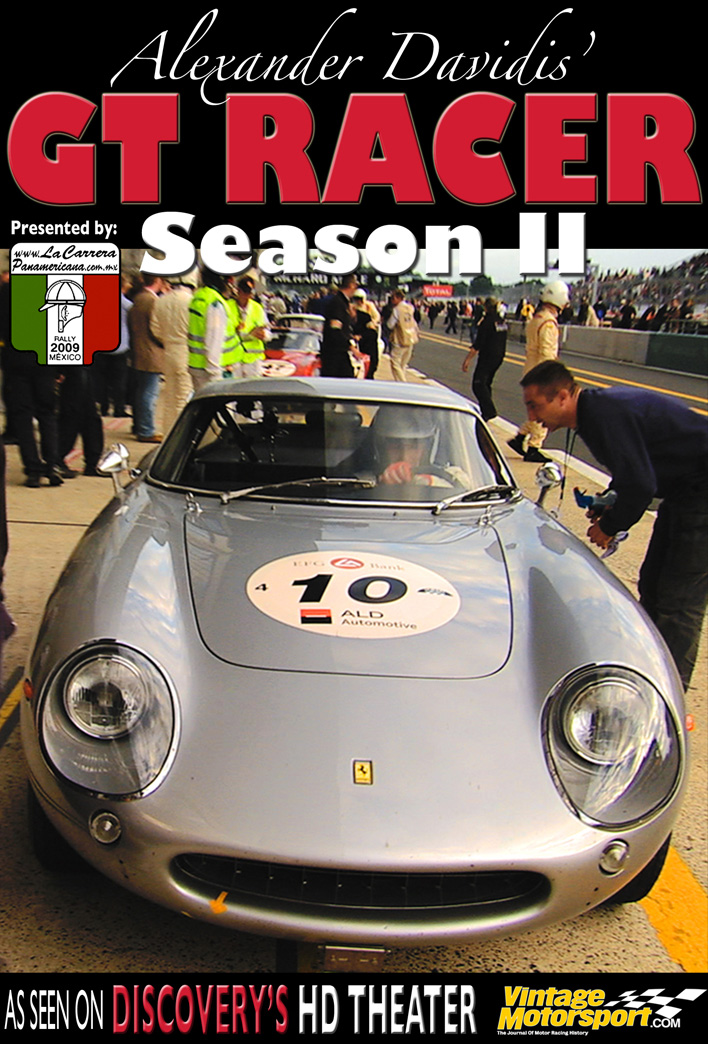 Comment by Alexander Davidis on September 27, 2009 at 9:18am
I am sure most got the email or have had a chance to read my blog.
But for completion sake: DVDs of SEASON 2 are OUT!!!!
go to Amazon:
http://www.amazon.com/GT-Racer-Gregoire-Audi/dp/B002O0QPVW 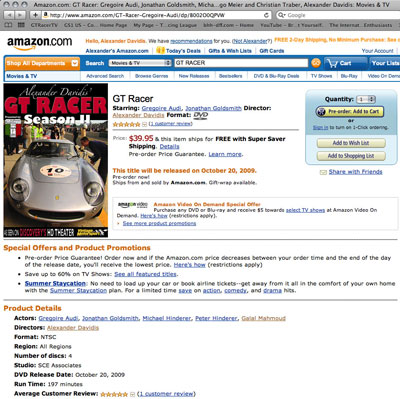 Or to the Discovery Channel Store (where you can also order by phone):
http://store.discovery.com/detail.php?p=109167&v=discovery 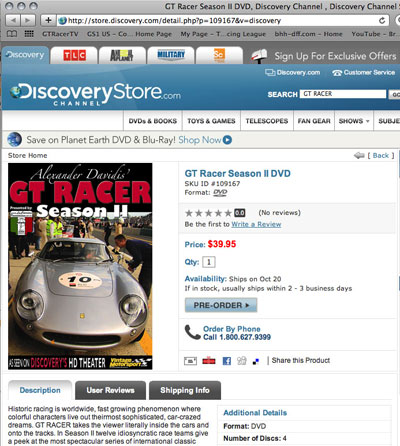 More info - as allways - at: www.GTRacerTV.com, which we periodically update.

This is the text of our latest Press Release:

Season Two is available as a Four-Disc Box Set. For the die-hard racing enthusiast and historic racing connoisseur it special features two sound tracks; background music ‘on’ and ‘off’. The two sound tracks can be toggled while viewing by using the audio button of the DVD player’s remote control. This gives the viewer the option to just enjoy glorious engine noises of 1960s Bizzarrinis, Ferraris, Jaguars, Morgans, Mustangs and Cobras at any time during the screening. The program was shot in High Definition (HD) and considerable work went into the compression and authoring process to maintain the highest picture quality that is available on standard definition DVDs today to deliver the top-end GT RACER experienced on any DVD player or computer, in any region worldwide. This DVD Box Set takes the viewer literally inside the cars and onto the tracks.

GT RACER’s Season One, airing on UKTV’s channel ‘Dave’ is one of Britain’s top rated shows on television. In Season Two further twelve idiosyncratic race teams give a peek at the most spectacular series of international classic racing, where the most beautiful classic racers ever built battle it out on the world's most glamorous racing circuits of Europe and America. In the U.S. Season Two premiered earlier this month on Discovery’s HD Theater instantly creating a buzz throughout the automotive chat rooms and blog-sphere. Car enthusiasts call it already “the best show on television” with the forth episode “La Carrera Panamericana” yet to premiere, Friday September 25th on Discovery’s HD Theater 8:00PM ET with multiple reruns on consecutive days.

The four discs feature the latest “Le Mans Classic”, the “500KM Marathon” on the Germany’s Nürburgring, the “Masters Series Festival” at Magny Cours and the legendary “Carrera Panamericana” in Mexico.

John Galt Films, Inc. is the New York City based boutique production company behind the program. Owner Alexander Davidis writes, directs and produces the GT RACER TV-series. He can be reached at info@johngaltfilms.com or by phone: +1 (212) 744.7441. GT RACER DVD viewing copies are available for editorial reviews. 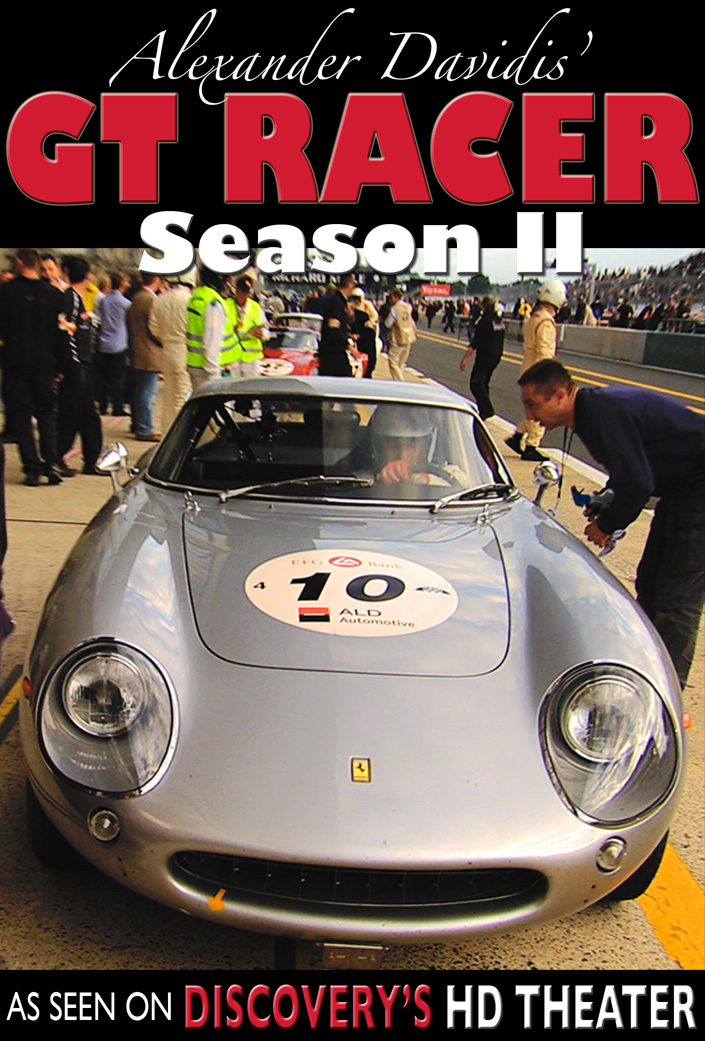 September 1, 2009, New York City – John Galt Films, Inc. announces the premier of the second season of Alexander Davidis’ popular TV-series GT RACER on historic racing.
Season two’s first episode airs in the US on Friday, September 4 at 8 PM ET on Discovery HD Theater, available on Optimum Digital Cable Channel 765, Comcast Digital Cable and Time Warner Digital Cable channel 819. In the UK the new season will premier on Discovery HD, on Wednesday, September 9 on Channel 536 on Sky Digital.
Historic racing is a worldwide, fast growing phenomenon where colorful characters live out their most sophisticated, car-crazed dreams. GT RACER takes the viewer literally inside the cars and onto the tracks. GT RACER’s first season airing on UKTV’s channel ‘Dave’ is one of UK’s top rated shows on television. In Season II twelve idiosyncratic race teams give a peek at the most spectacular series of international classic racing, where the most beautiful classic racers ever built battle it out on the world's most glamorous racing circuits: Bizzarrinis, Ferraris, Jaguars, Morgans, Mustangs and Cobras race at the great circuits of Europe and America.
The first Episode, shot at the 2008 “Le Mans Classic”, takes a look at what it’s like to race classic racecars day and night at the single most iconic tracks of all times - immortalized by none other than Steve McQueen himself: LE MANS. Its the most brutal endurance test for historic cars and crews.
The second episode shot at the 500KM Marathon on the Germany’s Nürburgring takes one onto the Nordschleife. This is the most complicated track in the world. In the hills, up and down, changing pavements – all together 25km in length with some 80 plus turns. It’s a race of 500 treacherous and dangerous kilometers.
The third episode brings one to Magny Cours, France’s grand prix circuit. Built for formula-one cars, this track makes an interesting playground for historic racers. The Masters Series Festival at Magny Cours is a showdown in sideways drifts with its three-hour endurance race as the main highlight.
The final installment follows the legendary Carrera Panamericana. This is the toughest classic race in the world, spanning seven days and 3,200km through Mexico. Special speed sections feature 550km of closed public roads for full speed racing. The roll-cages are thicker as one sometimes races along the edge of a 500 foot cliff.

Great to hear more DVDs are coming to market! GT Racer is a series I treasure for all the right reasons. The excerpts of your new DVDs only make me want to attend these events too!

The Algarve master Historic Race is from the 16th to 18th October at the Circuit near Portimao. The timetable link is :http://www.themastersseries.com/resources/AL09_090420_Horario.pdf

I was there for the Le Mans Series race two weeks ago and the circuit has unexpected some good vantage points even for amateur photographer (direct views onto the circuit with no fencing), a large paddock and incredible elevations; turn 15, the last turn before the main straight is quite breath taking with the LMP1 cars having to lift slightly before the straight, LMP2 apparently did not.

The on circuit services are not fantastic, no on-circuit beef-burgers! (A horrible treat I love when watching motor racing). Sadly the event was poorly attended for the event and the audience that showed up was relatively unprepared, meaning no ear plugs for example. I even saw a woman in a gown! A race experienced friend prepared with the right protection was unhappy with people standing up before the start of the race blocking our view; I said to him that once the race started we would have the stand to ourselves, I got a strange look! True enough this was the case as the sound was too much for anyone without to bear; the stand was cleared of all spectators...

All that said I enjoyed the weekend immensely and would look forward to going back, for this Master Historic Series event mentioned. If you are thinking of going Lagos is smarter than Portimao. The food is good in both.

Comment by Alexander Davidis on August 13, 2009 at 7:55am
Hi Kris,
I have made no plans yet. We are pretty busy with getting more DVDs to market. But this should all be concluded by mid September. When is the exact date again?

Will you be at the Algarve Race in October?

Comment by Alexander Davidis on August 6, 2009 at 6:59pm
Hi Stephen,
Thanks - All NEW trailers are up now :-)
The originals (located on YouTube) can be watched in full screen and HD.
Super Very Best
A