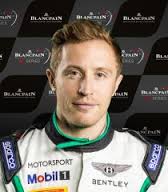 Quick, committed and professional, Duncan Tappy has long been established as one of the most impressive talents in British motorsport.

A past winner of the Formula Ford Festival and British Formula Renault title, Duncan has since showed his versatility in a wide range of series.

A Factory Bentley driver in the Blancpain Endurance Series for Team M-Sport Bentley, he is also brand ambassador for the Harwoods Group.

Throughout his championship-winning career, Duncan Tappy has built an enviable reputation as the complete racing driver – as quick on the track as he is professional off it, talented as both a racer and a coach, and an articulate spokesperson for his sponsors.

Duncan during a rare quiet moment in Superleague

2005 saw Duncan’s first full season in car racing with a remarkable thirteen consecutive race wins in Formula Ford. Not only did he take the championship by storm in the second part of the season, he dominated the prestigious Formula Ford Festival at Brands Hatch where he faced stiff competition from international Formula Ford rivals.

The next step for Duncan was to progress to a ‘slicks and wings’ car for 2006 and he chose Formula Renault UK to make his leap. He spent his first season with his old Formula Ford team – Jamun Racing – learning the car and the engineering aspects that make it such a competitive series.

Having been identified as one of the top six British prospects for the McLaren Autosport Awards he then had his talent recognised further by being made a British Racing Driver Club ‘Rising Star’ in the summer of 2006.

2007 saw a move to Fortec Motorsport where Duncan wasted no time in making an impression. He took the UK Formula Renault Championship title with ten impressive wins. In 2008 Duncan showed his versatility with drives in World Series by Renault with Italian Team RC Motorsport, Superleague Formula where he achieved three podium finishes out of ten races, Rookie sessions in Mexico and Shanghai with A1 GP GBR, the Le Mans Series, Porsche Carrera Cup and Time Attack.

He returned to Superleague Formula in 2009 and once again in 2010 – splitting time in that season with the Auto GP championship. In that year he earned eight top-5 finishes in Auto GP, finishing third overall in the drivers’ standings and helping DAMS to the team title. He also found time to score five podiums in Superleague Formula.

After more Superleague duty in 2011 – including a race win at Assen – he will spend 2012 racing for ART Grand Prix in the Blancpain Endurance Series.

You need to be a member of Duncan Tappy to add comments!