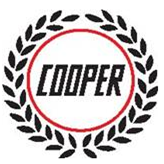 The Cooper Car Company was founded in 1946 by Charles Cooper and his son John Cooper. Through the 1950s and 1960s, they reached auto racing's highest levels as their rear-engined cars altered the face of Formula One and the Indianapolis 500.

Cooper Car Company
The Cooper Car Company was founded in 1946 by Charles Cooper and his son John Cooper. Together with John's boyhood friend, Eric Brandon, they began by building racing cars in Charles' small garage in Surbiton, Surrey, England in 1946. Through the 1950s and early 1960s, they reached auto racing's highest levels as their rear-engined, single-seat cars altered the face of Formula One and the Indianapolis 500, and their Mini Cooper dominated Rally racing. Thanks in part to Cooper's legacy, Britain remains the home of a thriving racing industry, and the Cooper name lives on in the Mini Cooper production cars that are still built in England but are now owned and marketed by BMW.

This standard Cooper-Climax T53 F1 was donated by Jim Hall to the IMS in 1969. It is painted to look like Jack Brabham's 1961 Cooper-Climax T54, the car that began the rear-engine revolution at the Indianapolis 500. The real car is displayed at the Marconi Automotive Museum in Tustin, California.The Cooper Car Company was founded in 1946 by Charles Cooper and his son John Cooper. Together with John's boyhood friend, Eric Brandon, they began by building racing cars in Charles' small garage in Surbiton, Surrey, England in 1946. Through the 1950s and early 1960s, they reached auto racing's highest levels as their rear-engined, single-seat cars altered the face of Formula One and the Indianapolis 500, and their Mini Cooper dominated Rally racing. Thanks in part to Cooper's legacy, Britain remains the home of a thriving racing industry, and the Cooper name lives on in the Mini Cooper production cars that are still built in England but are now owned and marketed by BMW. 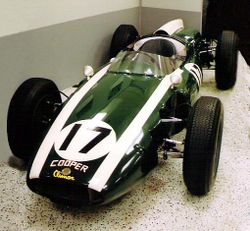 The first cars built by the Coopers were single-seater, 500cc Formula racing cars driven by John Cooper and Eric Brandon and powered by a JAP motorcycle engine. Since materials were in short supply immediately after World War II, the prototypes were constructed by joining two old Fiat Topolino front-ends together. According to John Cooper, the stroke of genius that would make the Coopers an automotive legend -- the location of the engine behind the driver -- was merely a practical matter at the time. Because the car was powered by a motorcycle engine, they believed it was more convenient to have the engine in the back, driving a chain.

Called the Cooper 500, this car's success in hillclimbs and on track, including Eric winning the first post war motor race at Gransden Lodge airfield, quickly created demand from other drivers (including, over the years, Stirling Moss, Peter Collins, Jim Russell, Ivor Bueb, Ken Tyrrell and Bernie Ecclestone) and led to the establishment of the Cooper Car Company to build more. The business grew by providing an inexpensive entry to motorsport for seemingly every aspiring young British driver, and the company became the world's first and largest post-war, specialist manufacturer of racing cars for sale to privateers.

Cooper built over 300 500cc Formula 3 cars and dominated the category, winning 64 out of 78 major races between 1951 and 1954. This volume of construction was unique and enabled the company to grow into the senior categories, it was with a modified Cooper 500 chassis, a T12 model, that Cooper had its first taste of top-tier racing when Harry Schell retired on the first lap of the 1950 Monaco Grand Prix. Although brief in duration, this entry marked the first appearance of a rear-engined racer at a Grand Prix event since the end of WWII.

The front-engined, Formula 2 Cooper Bristol model was introduced in 1952. Various iterations of this design were driven by a number of legendary drivers - among them Juan Manuel Fangio and Mike Hawthorn - and furthered the company's growing reputation by appearing in Grand Prix races, which at the time were run to F2 regulations. It wasn't until the company began building rear-engined sports cars in 1955 that they really became aware of the benefits of having the engine behind the driver. Based on the 500cc cars and powered by a modified Coventry Climax fire-pump engine, these cars were called "Bobtails." With the center of gravity closer to the middle of the car, they found that it was less liable to spin out and much more effective at putting the power down to the road, so they decided to build a single-seater version and began entering it in Formula 2 races.

Rear-Engined Revolution
Chevrolet-powered 1964 Cooper Monaco
A rear three-quarter picture of a Cooper T51, the first World Championship-winning mid-engined Formula One car.
Cooper-Maserati T86, of the type driven by Jochen Rindt in 1967Jack Brabham raised some eyebrows when he took sixth place at the 1957 Monaco Grand Prix in a rear-engined Formula 2 Cooper. But when Stirling Moss won the 1958 Argentine Grand Prix in Rob Walker's privately-entered Cooper and Maurice Trintignant duplicated the feat in the next race at Monaco, the racing world was stunned and a rear-engined revolution had begun. The next year, 1959, Brabham and the factory Cooper team became the first to win the Formula One World Championship in a rear-engined car. Both team and driver repeated the feat in 1960, and every World Champion since has been sitting in front of his engine.

Brabham took one of the Championship-winning Cooper T53 "Lowline" to Indianapolis Motor Speedway for a test in 1960, then entered the famous 500-mile race in a larger, longer and offset car based on the 1960 F1 design. Arriving at the Speedway May 5, 1961, the "funny" little car from Europe was mocked by the other teams, but it ran as high as third and finished ninth. It took a few years, but the Indianapolis establishment gradually realized the writing was on the wall and the days of their front-engined roadsters were numbered. Beginning with Jim Clark, who drove a rear-engined Lotus in 1965, every winner of the Indianapolis 500 has had the engine in the back. The revolution begun by the little chain-driven Cooper 500 was complete.

Once every Formula car manufacturer began building rear-engined racers, the practicality and intelligent construction of Cooper's single-seaters was overtaken by more sophisticated technology from Lola, Lotus, BRM and Ferrari. The Cooper team's decline was accelerated when John Cooper was seriously injured in a road accident in 1963 driving a twin engined Mini and Charles Cooper died in 1964.

After the death of his father, John Cooper sold the Cooper Formula One team to the Chipstead Motor Group in April, 1965. Their final Formula One victory was achieved by Mexican driver Pedro Rodríguez at the 1967 South African Grand Prix in a Cooper T81. In all, Coopers participated in 129 Formula One World Championship events in nine years, winning 16 races.

In 2008, the Cooper name survives (2008) in the chain of UK BMW dealerships operated by Inchcape plc. Mini Legacy
As the company's fortunes in Formula One declined, however, the John Cooper-conceived Mini Cooper -- introduced in 1961 as a development of the Alec Issigonis-designed British Motor Corporation Mini with a more powerful engine, new brakes and a distinctive paint job -- continued to dominate in saloon car and rally races throughout the 1960s, winning many championships and the 1964, 1965 and 1967 Monte Carlo Rallies.

Several different Cooper-marked versions of the Mini and various Cooper conversion kits have been, and continue to be, marketed by various companies. The current BMW MINI, in production since 2001, has Cooper and Cooper S models and a number of John Cooper Works tuner packages. 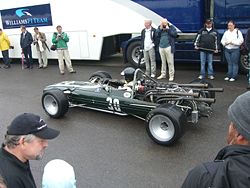 On 1 April 1968 John Cooper leased the building to the Metropolitan Police and the local Traffic Division (V Victor) moved in. They would stay there for the next twenty-five years and 'TDV' would become one of the busier police garages. In August 1968, they were supplied with the two Mini Coopers index numbers PYT767F and PYT768F. The centre boss of the steering wheel was replace by a speaker and microphone and a PTT transmitter switch, was added to the steering column. The sight of a six-foot bobby getting into the mini, caused great humour amongst the locals. The vehicles were trialled for a number of months, but no orders were placed for other garages.

You need to be a member of Cooper Owners Group to add comments!

Thanks Garth,  That's what I suspected.

I have the book by Nye, but its not very technical.  A good read non the less.

Comment by Garth Thomas on December 4, 2013 at 12:40am
Hi Leo...
Reviewing your photos , it does seem to be a T72 1964, it looks to have been upgraded with the MAE sometime after 1964.
My reasoning is that the front suspension cantilevers are of the earlier 3:1 ratios the 1965 were update to nearer 2:1. Also looking at the engine mounts, they have been fabricated using square section tube, not something one would see in an original construction.
I notice that the rear suspension gas an additional radius arm under the car, this must also have been added at a later date.
A good book to purchase would be cooper cars by Doug Nye, excellent history of the cooper race car brand.

I see your from NZ.  By Chance, do you know Martin Lucas, he has a Ralt and a Lotus FF I think.

Here is a link to my photos.

I finally pulled the trigger.  After much pondering I decided a Formula Ford was the way to go until I crossed paths with this Cooper Formula 3.  The data tag is missing...so is the history.  If anybody could help Id be forever indebted to you.

It was imported to the States in 1989.  Bought from Strait Six (see advert).