The world's biggest-selling classic car magazine has a well-earned reputation for being the most authoritative title on the subject. It features the finest cars from across the globe, combining unrivalled editorial, the finest photography and beautiful design, as well as providing the ideal medium for buying and selling classic and sports cars because thousands are advertised every month. It is the only magazine a classic enthusiast needs.

Classic & Sports Car is published by Haymarket Autosport and Classic Publications, a subsidiary of Haymarket Magazines.

September 23, 2008
Fabulous Panther 6 to be the highlight at the NEC Classic Motor Show 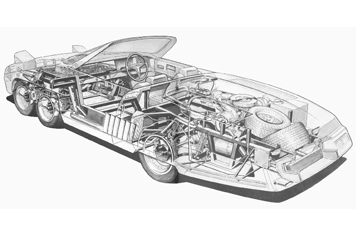 Visitors to the NEC Classic Motor Show on 14-15 November will be wowed by the sensational six-wheeled Panther 6. The 600bhp, twin-turbo supercar that made its debut at Earl’s Court in 1977 will be on the Panther Car Club stand to celebrate the event’s ‘launches’ theme.

Also on display on Mazdarotaryclub.com is a rotary-engined Mazda 110S Cosmo - which was launched 40 years ago – while the Jaguar Enthusiasts’ Club and Porsche Club GB will be marking diamond anniversaries of two icons of automotive history, the Jaguar XK engine and the Porsche 356.
Posted by Mick Walsh - Editor in Chief 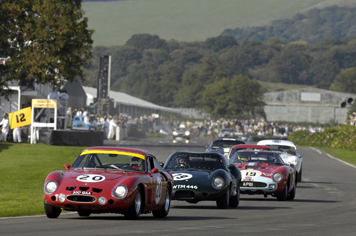 A Ferrari victory in a dramatic RAC Tourist Trophy Celebration was the highpoint of a magnificent 10th Goodwood Revival Meeting on 19-21 September. The 330LMB of Revival regular Peter Hardman and Bobby Verdon-Roe held off the challenge of the pre-race favourites, Red Bull F1 technical director Adrian Newey and Martin Brundle in Newey’s Jaguar E-type Lightweight.

A Ferrari also featured in one of the scariest moments of the weekend when German ace Jochen Mass rolled the D50A in the Richmond & Gordon Trophies. Thankfully, Mass only suffered bruising and waved to reassure the relieved crowd.

The Revival has become much more than a historic race meeting, however, as this year’s wonderful ‘Life on the Road in 1948’ display confirmed. The eclectic period group ranged from Hudson Autocycle to Sentinel steam wagon and was an event highlight for many spectators. Display organiser Malcolm McKay joined in the convoy on a Hercules bicycle and cheekily grabbed a tow from a mighty Scammell Pioneer truck.
Other special features included a ‘pre-war’ garage celebrating the work of Goodwood circuit founder Freddie March and the dazzling Woad Corner art deco garage display. The impressive Earls Court-style frontage promised much, but the display inside the disguised aircraft hangar was an anticlimax.

The St Mary’s Trophy justified its perennial popularity, providing the Revival crowd with two gripping races and a sensational line-up of heroes. In Saturday’s first race, Tony Dron set the early pace, gunning the Mk1 Ford Zodiac to lead with Anthony Reid trying every angle to find a way by in his Mk1 Jaguar. When Dron’s race ended on lap three as the crippled Ford ploughed off at Lavant, all eyes turned to the giant-killing A35s of Jackie Oliver and Tony Jardine as they attacked John Fitzpatrick’s Austin Westminster ‘Herbert’. First Oliver nudged ‘Fitz’ at speed before Jardine touched the big Austin as they funnelled through the Chicane on lap 11. The impact unsettled the A95, resulting in a spinning roll that pinned the A35 against the barriers and stopped the race early. Few expected to see ‘Herbert’ on Sunday, but owner/second driver John Young and his crew worked all night to sort the car and it roared on to a popular victory.

A fabulous entry took to the grid as the sun dropped on Saturday for the 90-minute Freddie March Memorial Trophy. There was no stopping Emanuele Pirro in Rob Waterhouse’s Austin-Healey 100S, as Pirro and co-driver Stuart Graham lapped the field. The Healey’s dominance didn’t spoil this evocative race as lights came on and evening sun kissed the racers’ beautiful forms.

The Revival closed in dramatic fashion as the fastest grid of the weekend battled for the Whitsun Trophy. As the WW2 warbirds made their final pass overhead and the Royal Marines played a trumpet fanfare, Simon Hadfield defied a slow puncture to take an impressive victory.

“The gods have been kind to us,” said Lord March. “The weather has been gorgeous and we’ve ended every race, which is a Revival first.”
Posted by Alastair Clements

Visitors to the annual Pebble Beach and Monterey week will get a taste of Italy's finest with a host of the country's marques celebrated across the Monterey Peninsula. Kicking off at its new Marina Airport Location is Concorso Italiano on 14-15 August with a celebration of Marcello Gandinis finest designs. It includes the stunning Lamborghini Miura and Countach. The 35th Rolex Monterey Historic Automobile Races (15-17 August) salutes Alfa Romeo and will star the Alfa 8C-2900B Mille Miglia that F1 champ Phil Hill raced at the event's inaugural 1975 running.

Pebble Beach will crank up the prestige on 17 August with a display of six different Ferrari California Spiders alongside the first showing of the only factory-built Ferrari Superamerica with California Spider bodywork. Also featuring on the lush fairway will be a group of 17 pre- and post-war Lancias, including the oldest on record, a 1908 12hp Alpha, plus the 1953 Liege-Rome-Liege rally-winning Aurelia B20. Not to be outdone will be Detroit big hitter GM, which marking its 100 years with a display of prototypes and concept cars from the original GM Motorama road show that ran from 1949-61. The GM spotlight will extend to a class of super-smooth V16 Cadillacs and a display GM woodies and GM-powered sports cars. C&SC will be sponsoring the Elegance in Motion class for cars participating in the Tour d'Elegance run on 14 August.
Posted by Mick Walsh - Editor in Chief

July 23, 2008
Never mind Hamilton, the return of the BMW M1 Procars was the real Hockenheim highlight After a 30-year break, the dramatic BMW M1 Procars returned to the track at Hockenheim, Germany on 19 and 20 July to provide dramatic support ‘show races’ for the German Formula One Grand Prix. The 10 500bhp mid-engined racers were piloted by motor sport heroes past and present, including three-times F1 World Champion Niki Lauda. “It was such a hoot,” said Lauda. “We were allowed to drive how we wanted, we didn’t have to hold back on the pace. Actually, we should have been chasing Jochen Neerpasch in the M1 Art Car, but he didn’t get off to a proper start. And that gave me a clear run. I’m going to have to seriously reconsider whether my career really is over!”

BMW Sauber F1 Team test driver Christian Klien, also took to the track in a car built before his birth. “I’ve always wanted to race against Niki Lauda,” he grinned. “It’s amazing the handling these cars already had back in the 80s. Even today they feel quite advanced. And as for the sound, it’s out of this world.”

Other celebrity drivers included Christian Danner, Marc Surer, Dieter Quester, Harald Grohs, His Royal Highness Prince Leopold of Bavaria and Jochen Neerpasch, who was privileged to drive the enormously valuable M1 Art Car, liveried by pop art legend Andy Warhol, alongside artist Frank Stella. Despite an early clutch problem Jochen Neerpasch relished the experience: “It’s marvellous that it all got off the ground. We will also publish a book to mark the 30th anniversary.”
Posted by Alastair Clements 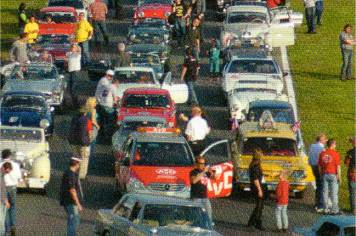 A new memorial to the twice World Champion was unveiled at the Jim Clark-Revival at Hockenheim on 25 April. Present were German driver Kurt Ahrens – who spent the last evening with Clark and started from the front row in that tragic race on 7 April ’68 – ex-Lotus mechanic Bob Dance and Clive Chapman. “On that day we lost a friend,” said Ahrens, “but Jimmy will never be forgotten.” About 100 people attended, including friends of Clark, enthusiasts, journalists and photographers.
Because the far end of the original circuit has been allowed to go back to nature, the new memorial is a mile away from the site of the accident, where two bushes and a wooden cross still mark the spot.
Winfried Kolb, 66, is the only surviving eyewitness of the tragedy: “I was a marshall in the middle of the first straight into the woods. The leading pack, with Pescarolo, Beltoise and Ahrens, was already through when I saw that Clark’s car was pointing in a strange direction. I could read the number on its side because the red-and-white Lotus was passing me at a 45° angle. And then it went right into the trees and disintegrated about 30 yards away from us. I informed race control and within five minutes the ambulance was at the spot. When the news that he was dead came through after three hours or so, we simply could not believe it.”
The meeting also hosted another attempt to break the world record for the number of classics on a circuit at one time. Even with 750 cars, it failed. See Sport for more.
Posted by The C&SC Team 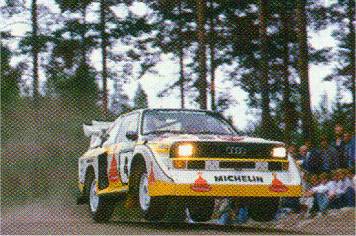 LOTUS IS THE MAIN THEME OF THE Silverstone Classic, from 25-27
July. It features 21 races, from pre-war sports cars to FIA Historic F1. Among eight two-driver events will be The British Empire Trophy, a 90-minuter for 1985-’90 Group C cars, and the Denny Hulme Trophy for World Sportscar Masters, such as Lola T70s and GT40s, running into the dusk on Saturday.
Historic Lotus cars on display range from the 38 in which Jim Clark won the Indianapolis 500 in ’65 to 007’s amphibious Esprit. There will also be a parade of 1948 British Grand Prix single-seaters to mark Silverstone’s 60th anniversary, while Group B rally cars will perform on a dedicated special stage. More than 60 car clubs are expected to show up to 4000 cars.
A three-day ticket costs £55 in advance and a one-day family ticket £60. For more details, see www.silverstoneclassic.co.uk or call 08717 033848.

Posted by The C&SC Team

You need to be a member of Classic & Sport Car Magazine Group to add comments!