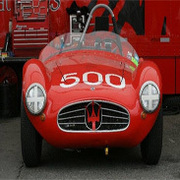 The Barnard was a British cyclecar manufactured by A Ward of Whitechapel Road, London, between 1921 and 1922.

The Barnard was a British cyclecar manufactured by A Ward of Whitechapel Road, London, between 1921 and 1922.

Two version of the car were advertised , a touring and a sports model both powered by a 1169 cc straight four, air cooled, motor cycle engine by the United States Henderson motor cycle company. The gearbox had three forward speeds and no reverse coupled to the engine through an oil bath multi plate clutch. Drive to the rear axle was by chain. Starting was by a kick start.

The bodies featured a dummy bullnose radiator and side by side twin seats. The sports model had a full length exhaust running the length of the outside of the car on the driver's side and twin spare wheels mounted on top of the tail. The Tourer cost £168 and the Sports £188.

You need to be a member of Barnard Owners Group to add comments!