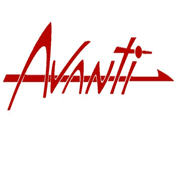 The Studebaker Avanti was a sports coupe built by the Studebaker Corporation between June 1962 and December 1963. The Avanti featured a radical fiberglass body design mounted on a modified Studebaker Lark convertible chassis.

Introduction
Avanti is Italian for "forward" or "advance," and the car lived up to its name. While Jaguar began offering production-car disc brakes in 1957 on the XK150, the Avanti was the first American mass-produced car to feature standard disc brakes. The Avanti's emphasis on safety, with seatbelts available as an option, safety door latches and roll-over protection bar, was also very advanced.

Origins
Concept sketch by Raymond LoewyThe Avanti's classic design originated in an intense five-week session in a rented house in Palm Springs, California near the home of lead designer Raymond Loewy with the team of Bob Andrews, Tom Kellogg, and John Ebstein. The waist had a coke bottle shape, which held up a thin-section roof with a bubble-back rear window and an integral rollbar. Loewy achieved the look of a rear-drive sports car by replacing the function of a conventional grille with a bottom breathing air intake placed under the front bumper, a styling feature that reached the family sedan in the 1980s with the Ford Taurus The driver looked over an asymmetrical hump in the hood. The cockpit had crash padding, and seating was in four bucket seats. It would be put into production with few changes from the original small-scale model. The unique and classic aesthetics of the car garnered a following, and it consequently lived on in production as a hand-built, custom-order model decades after Studebaker closed its doors.

In the early 1960s, Studebaker needed some excitement in the showrooms but, because of the precarious financial situation, it had little capital to invest in product development. Although the Avanti looked entirely new, it was mounted on a 109-inch Lark Daytona convertible frame, based upon the 1953 design. For power, the Avanti relied on Studebaker's own old-design but rugged V8. For use in the Avanti, several high-performance modifications were utilized.

Studebaker had first used Paxton superchargers on the 1957 and '58 Studebaker and Packard Hawks. Subsequently, they bought the company. With the assistance of car racing legend Andy Granatelli, Studebaker developed an R-3 and an R-4 engine for the Avanti. The first R-3 was a 289 was bored initially to 299. Later versions were 304.5 cubic inches (just under the class-C five-liter limit). The R-3 employed special cylinder heads with much larger intake ports and larger valves, an aluminum intake manifold with correspondingly larger ports, long-branch lower restriction exhaust manifolds, longer-duration camshaft, and a Paxton supercharger blowing through a Carter AFB four-barrel carburetor mounted in a pressurized aluminum box. The R-3 was rated at 335 hp (250 kW), but reportedly produced 411 at the flywheel. The R-4 engine was essentially the same as the R-3 engine except that it incorporated domed pistons for a higher compression ratio and a dual four-barrel manifold with two Carter AFB carbs. The R-4 was rated at 280 horsepower (210 kW).[citation needed]

During the fall of 1962, on August 14th, the prototype R-3 (299 cid) driven by Andy Granatelli set several land speed records with the top speed of 168.15 mph (270.61 km/h) for the Flying Mile. This Avanti was later modified into the Due Cento for the 1963 Bonneville runs. In October 1963, Granatelli took several Studebakers to the Bonneville Salt Flats, including an R-3 Avanti (#9) in which he reached a record speed of170.78 mph (274.84 km/h).[citation needed] By the time he was done, Granatelli had set or broken 34 U.S. land speed records in the Avanti, allowing Studebaker to proudly proclaim it the "World's Fastest Production Car". In addition to being fast, the Avanti led the domestic auto industry in the use of front caliper disc brakes (Dunlop discs produced under license by the Bendix Corporation).[citation needed]

A one-off custom version of the Studebaker V8 was the Granatelli-developed, experimental R5. With Bendix aircraft fuel injection as used on the Novi Indy car and a Paxton supercharger mounted to each cylinder bank, it produced 638 horsepower (476 kW) on the Paxton dynamometer. The R-5 was mounted in Granatelli’s special Avanti “Due Cento” (200 in Italian), with which he planned to break 200 miles per hour. Unfortunately, Granatelli could not get enough traction during his Bonneville run, achieving a top speed of 196.62 miles per hour.[citation needed] The R5 never officially competed again.[citation needed]

Early orders and problems
The Avanti was heavily promoted — even named the Official (honorary) Pace Car of the 1962 Indianapolis 500-mile (800 km) race — and many enthusiastic buyers placed advance orders. However, long production delays depressed sales, and led to the substitution of the Lark Daytona Convertible to pace the "500".[citation needed] The major delay was caused by problems with the alignment of some of the fiberglass body panels and the rear window opening being too big for the glass. These difficulties were quite surprising to Studebaker executives, since body fabrication had been farmed out to the Molded Fiberglass Products Company of Ashtabula, Ohio: this firm that had been making Chevrolet Corvette bodies since 1954. To solve these problems, Studebaker was eventually forced to assemble the body panels themselves — but it was too late, as many sales had already been lost.[citation needed]

On December 9, 1963, Studebaker announced the end of car and truck manufacturing in South Bend, and the consolidation of all vehicle manufacturing in its Hamilton, Ontario, Canada plant. At that point, the company dropped the Avanti, the Gran Turismo Hawk, and all pickups and trucks in order to focus on sedans, coupes and station wagons. Only 4,643 Avantis (not including prototypes, some of which were assigned serial numbers at the end of the run) had been produced by the time Studebaker closed the South Bend factory on December 20, 1963. The final Avanti, a white fully optioned R-3 car, contained a letter signed by Studebaker employees advising the future owner of the car's significance under the carpeting near the spare tire well.[citation needed]

Studebaker survived another two years by assembling Commanders, Daytonas, Wagonaires and Cruisers at Hamilton that were equipped with 230-cubic-inch six-cylinder and 283-cubic-inch V8 engines sourced from GM Canada LTD (that were based on contemporary Chevrolet engines), but the thrill was gone. Studebaker ended automobile production on March 17, 1966.[citation needed]

Avanti II and XUV
Following the closure of the South Bend operation, two South Bend, Indiana Studebaker dealers, Nate Altman and Leo Newman purchased the Avanti name, the body molds, remaining parts, tools, jigs, and a portion of the South Bend factory to continue making the Avanti. These Avantis, called the Avanti II, were given a 327 in³ (5.4 L) Chevrolet Corvette engine and were meticulously hand-built to order in very small numbers. The Avanti II's engine evolved from the 327 to the 350, the 400, and finally the 305. All Avanti IIs were built on Studebaker chassis until 1987. The 1987-89 models were based on GM's G-platform specifically the Monte Carlo.

On October 1, 1982, real estate developer Stephen H. Blake bought the rights to the Avanti II. Steve Blake made some updates to the car, notably the change to plastic, integrated bumpers and a redesigned dash and interior (introduced on a limited production run of "20th Anniversary" cars, but continued on for subsequent production) and also introduced a convertible model. At that time the "II" was dropped from the name, although the car remained substantially the same except as previously mentioned. Blake's company declared bankruptcy in 1986, and the company was purchased by Michael Kelly, who relocated production to Youngstown, Ohio.[citation needed] A second-generation automobile was styled by Tom Kellogg, one of the original Avanti design team members working for industrial designer Raymond Loewy, in the late 1980s. This car was based on GM's "F" platform Camaro/Firebird. Tom Kellogg was fatally injured in a car accident in California on 14 August 2003.[citation needed]

In 2003, Avanti Motor Corporation of Villa Rica, Georgia announced a Studebaker-branded SUV, the "XUV". A demonstration model appeared at the Chicago Auto Show. General Motors sued, claiming infringement of the trade dress of its Hummer model. In 2004, the parties announced a settlement.

In October 2005 an internet report was published that "Avanti Motors" had "recently announced a new relationship with Ford Motor" and was planning "a big comeback". An October 2006 brief report said the company had established a new factory at Cancun, Mexico and planned to produce 400 vehicles per year. A brief chronology of relevant events from 1961-2005 was published but all production of new vehicles is understood to have ended.

Michael Eugene Kelly, owner of Avanti Motors Corporation, was arrested by the FBI on Dec 22, 2006 in Florida. Kelly is suspected of running a $400 million Ponzi scheme from 1992–2004 and is in jail without bail facing mail fraud charges.

Scale model reproductions and kits
AMT has issued a 1:25 scale "Trophy Series" plastic kit of the Avanti. The model includes engine pieces to build the R5 dual-supercharged engine used by Andy Granatelli in an unsuccessful attempt to exceed 200 mph at Bonneville.

Aurora Plastics also made a 1:25 scale Avanti kit. The detail level is comparable to that of the AMT kit. No engine or appearance options are offered.

Micro Machines made preassembled reproductions of the Avanti in a very small size in several colors. Johnny Lightning produced a 1:64 scale 1963 Studebaker Avanti in 2006.
Franklin Mint Models also made a highly detailed replica of the Avanti in 1:24 scale with opening doors and hood, and meticulously reproduced engine details.

You need to be a member of Avanti Owners Group to add comments!