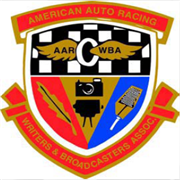 The American Auto Racing Writers & Broadcasters Association is the oldest and largest organization devoted to auto racing coverage. Founded in 1955 in Indianapolis, AARWBA has more than 400 members throughout the United States, Canada and Europe.

About AARWBA
The American Auto Racing Writers & Broadcasters Association is the oldest and largest organization devoted to auto racing coverage. Founded in 1955 in Indianapolis, AARWBA has grown to more than 400 members throughout the United States, Canada and Europe.

An annual directory is published for the membership, and is made available to members online.

The American Auto Racing Writers and Broadcasters holds a breakfast meeting at the Indianapolis Motor Speedway the Saturday before the race. AARWBA board members represent a cross-section of news media.

Each year the AARWBA members select a 7-driver All America Team from Open Wheel, Stock Car, Sports Car, Drag Racing, Short Track, Touring Series and At Large championship categories. A banquet is held to honor these drivers each January. The driver receiving the most votes is presented the "Jerry Titus Memorial Award™," which is AARWBA's "Driver of the Year" award. Jerry Titus was a member of AARWBA who was a motor sports journalist and a winning race driver.

Also announced at the All America Banquet is the winner of the Gorsline Scholarship, to an up-and-coming young driver who displays the attributes of a future champion and it is presented by John Gorsline of the Gorsline Company.

The Rick Mears "Good Guy" award is presented as a special reconition of media friendly racers.

AARWBA also presents Special Awards to honor those who have made special contributions to motor sport.

The Association presents the humorous Jigger Sirois Award and the Angelo Angelopolous Sportsmanship Award at the annual Indianapolis breakfast meeting. Another award, given when merited, is the "Comeback Driver of the Year," which goes to the driver who comes back from adversity to race again.

AARWBA has established the Legends in Racing Auto Racing Hall of Fame, to honor those who have made motor racing one of the largest spectator sports in America.

To encourage excellence in the coverage of motor sports, media members submit their best work for the annual media contest. Categories are for written, broadcast, online and photographic work. Entries are judged by an independent panel from a major journalism school. The winners represent a true testament to the growth of the sport of auto racing.

You need to be a member of American Auto Racing Writers and Broadcasters Association Group to add comments!

Comment by Andrew S. Hartwell on November 5, 2010 at 5:24pm
Bob, Wherever that junk is coming from it isn't from AARWBA.

Stephen, sound like a bug to you? Remember when several of us got the spam treatment early on too?

Back to Bob again: You know, if you cut out of VRL you cut yourself out of a lot of great photos, videos, potential friendships and just plain interesting content. You can get spammed from a million sources so you might not want to jump ship without first taking a cruise through the VRL waters.

Keep your speed up!

Comment by Bob Krueger on November 5, 2010 at 4:10pm
OK, I just signed up here yesterday. So far I have received two messages, not from this group specifically, but at the VRL level. They have both been like this one, but from two different people. If this keeps up I won't be staying around here long. I get plenty of junk mail without this trash.

"Compliment of the season! My name is Esther Desmond . I am looking for a friend to keep true relationship, I pick special interest in your profile and i am interested in communicating with you for friendship. There is something unique i feel about you and i want to share this sense with you. I also want to use this medium to wish you the best of luck in all your endeavours. Please reply to my private email address for better communication(estherdesmond@hotmail.com)"

Comment by Stephen Page on November 3, 2010 at 11:06am
AARWBA Members
Please feel free to use this Group to post your discussions, photos, stories or to air ideas.
Warmest regards - Stephen Page
AARWBA Member

Comment by Andrew S. Hartwell on March 5, 2009 at 7:44pm
If you are involved in motorsports as a writer, editor, photographer, broadcaster, on-line journalist, public relations professional or otherwise affiliated with presenting information about motorsports, consider joining the AARWBA!

Visit our website at www.aarwba.org - or contact our President, Dusty Brandel via her VRL page - for more information.

You may also contact me (Andy Hartwell) at ashartwell@att.net and I will send you an application!


Keep your speed up!
ash