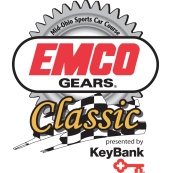 Export to Outlook or iCal (.ics)

The Grand-Am Rolex Sports Car Series kicks off the season on June 18-20 again as the first green flag of the 49th season of racing at Mid-Ohio Sports Car Course drops on the EMCO Gears Classic presented by KeyBank. The series’ two classes jockey for track position at the same time as the Daytona Prototypes and GT machines compete during the twilight hours on Saturday. The weekend is supported by the Continental Tire Sports Car Challenge, the Volkswagen Jetta TDI Cup, the Cooper Tires presents The Atlantic Championship, the ARCA Truck Series and the Ford Mustang Challenge.