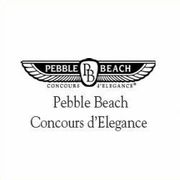 Since1950, the Pebble Beach Concours d’Elegance has staged the world’s premier celebration of the automobile. Phone: 831-622-1700 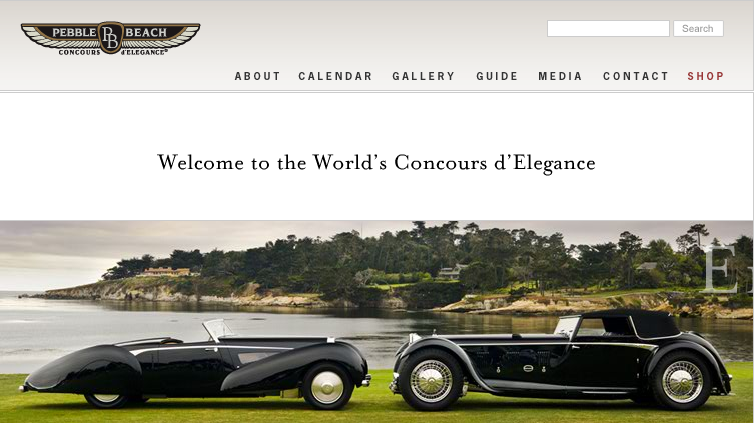 The Pebble Beach Concours d'Elegance is an automotive charitable event held each year on the Pebble Beach Golf Links in Pebble Beach, California, considered the most prestigious event of its kind. It is the finale of a week long festival of classic cars events in the Monterey area every year. A Concours d'Elegance (French, literally "a competition of elegance") is an event open to both prewar and postwar collector cars in which they are judged for authenticity, function, history, and style. Classes are commonly arranged by type, marque (manufacturer), coachbuilder, country of origin, or time period. Judges select first-, second-, and third-place finishers for each class in the event, and the judges confer the "Best of Show" award on one car from the group of first-place winners. In addition, a group of honorary judges-- individuals who have made significant contributions to the automotive industry or motorsports-- award a number of subjective awards to recognize standout vehicles regardless of class ribbons, as well as memorial awards created to honor specific automotive industry personages. 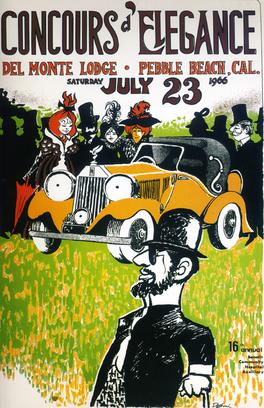 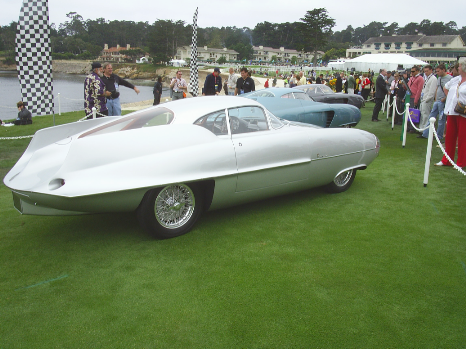 The original Bertone BAT (Berlinetta Aerodinamica Tecnica) concept cars gathered on the 18th green of the 2005 Pebble Beach Concours d'Elegance.
The Pebble Beach Concours d'Elegance was founded in 1950 as an adjunct to the Pebble Beach Road Race, a race event sponsored by the Sports Car Club of America and conducted on a circuit of closed public roads. The 1950 and 1951 Concours were held on a practice tee and driving range adjacent to the Beach Club, a private club near the Del Monte Lodge (now known as "The Lodge at Pebble Beach"). Thirty cars were exhibited on November 4, 1950, and a smaller field of 23 on May 27, 1951. In 1952, the event was moved to the 18th green of the Pebble Beach Golf Links, between the Lodge at Pebble Beach and the Pacific Ocean, overlooking Carmel Bay.

The Pebble Beach Concours d'Elegance has continued since 1950 with one missed year: in 1960, the show was cancelled due to scheduling conflicts. In addition, heavy rain at the event in 1963 and 1965 made the lawn area unusable, and so the cars were shown at the old start/finish line of the road race, near the horse stables now known as the Pebble Beach Equestrian Center.

In 2001, the event saw an introduction of a new category for preservation cars.

The 2006 event saw 175 cars lining the 18th green and h*** of Pebble Beach Golf Links with 25 judged classes, with cars brought to Pebble Beach from 27 states and 13 countries (including the U.S.). The event describes itself as "Exhibiting prewar and postwar automobiles along with the latest in concept car designs, the Pebble Beach Concours d'Elegance is the premiere concours in the world. 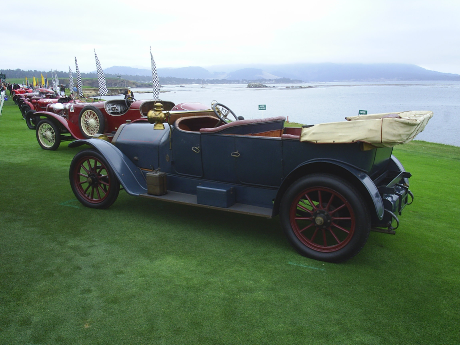 On the 18th green with a part of the 2005 Pebble Beach Concours d'Elegance prewar field.

24 of the 175 cars in the field come from outside the U.S, representing Italy, England, France, Switzerland, Australia, Hong Kong, Germany, Mexico, Czech Republic, Netherlands, and the Philippines. The total estimated cost of the vehicles spread across the 18th fairway at the 200 event was US$200 million. From 227 cars in 2005, the 2006 event had a field reduced to 175 cars. Organizers said the change was made to allow more time to judge each car. 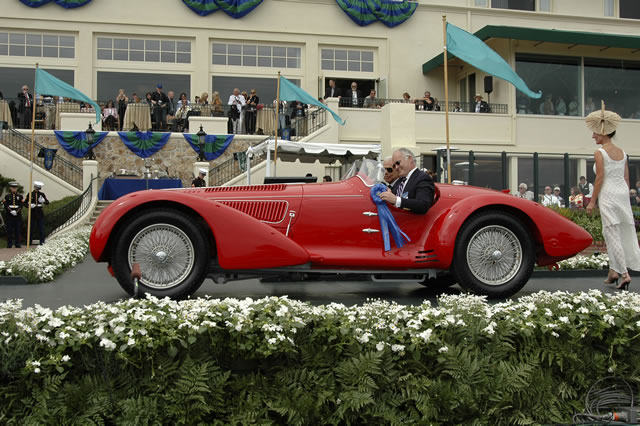 Designer Ralph Lauren crosses the 2005 Pebble Beach Concours d'Elegance judge's stand in his class-winning 1938 Alfa Romeo 8C2900MM Touring Spyder.
Prospective entrants must submit an application for each car, and the Concours field is selected from each year's pool of applicants. Many collectors spend years and hundreds of thousands of dollars purchasing and restoring a car in hopes of being chosen. Once a car is accepted to the Concours, it cannot again be entered in the event for ten years, with three exceptions; the ownership of the car has changed, the car has been restored, or if the featured marque is obscure, the Concours car selection committee can reach out to invite cars of varying restoration quality-- or cars that have previously been entered in the Concours-- in order to provide a healthy representation of the marque for exhibition.

Many of the competing cars are valued in the hundreds of thousands of dollars, and more recently into the millions of dollars. For this reason, along with its remarkable setting and amenities, the Pebble Beach Concours is considered the premier concours in the world, and is the centerpiece of over 50 related events spanning over a week, including vintage racing cars running at the Monterey Historic Automobile Races conducted at nearby Mazda Raceway Laguna Seca and a handful of classic car auctions conducted by Gooding & Company and others.

Due to the extreme cost of purchasing, restoring, and maintaining fine classic cars, the Pebble Beach Concours is sometimes perceived to be the realm of the very wealthy, or dedicated enthusiasts and those individuals and businesses that cater to their interests. To the repeat participants, their guests, and thousands of attendees, the Pebble Beach Concours is as much a social gathering as a special interest event. From postwar Ferraris to historic Bentleys, the Concours assembles a stylish mix of historic automobiles alongside new vehicle presentations from car manufacturers, art exhibitions, auctions, charity raffles, and more.

Charitable performance
The proceeds of the Pebble Beach Concours d'Elegance have supported the United Way of Monterey County and the Pebble Beach Company Foundation for a combination of 52 years. It also supports a number of other local and national organizations.

The 2006 event raised over $1 million, and the Concours has given more than $10 million to charities through the years.

You need to be a member of Pebble Beach Concours d'Elegance Group to add comments!

Comment by Stephen Page on October 14, 2008 at 2:58pm
HISTORY - April 17, 1955
Phil Hill wins the Pebble Beach Road Races for the third time and his 1931 Pierce-Arrow 41 LeBaron Convertible Town Cabriolet wins Best of Show at the Concours. It is the first true Classic car to do so; previously, new cars have always taken the top award. Now the show begins to focus much more on antique, vintage and classic models. The Concours also introduces its first two featured marques Cord and Packard on this occasion.

Comment by Stephen Page on October 14, 2008 at 2:57pm
HISTORY - 1950:
Celebrating automobiles for over 50 years
Initiated back in 1950 as an adjunct to the first Pebble Beach Road Race, the Pebble Beach Concours d’Elegance quickly gained its own following, growing from a local social event to the ultimate auto show.

Famed designers have been paired with their creations. Racing greats have been reunited with their steeds. Past and present marques have been featured. And special classes and exhibits have focused on Dream Cars, Microcars and Hot Rods — to name just a few.

November 5, 1950
The first Pebble Beach Concours dElegance is held in conjunction with the first Pebble Beach Road Road. Racing great Phil Hill, who will go on to be a World Drivers Champion, wins the Road Race driving a Jaguar XK120. Best of Show at the Concours goes to a 1950 Edwards R-26 Special Sport Roadster owned by its creator, Sterling Edwards. At the Concours, two to three dozen cars are exhibited in three classes: prewar cars, postwar cars and MGs. The Races and Concours are such a success that they are repeated immediately the following spring.